By midnight EST tonight, the A’s will need to finalize their 40-man roster to protect their own players from being selected in the Rule 5 Draft. Here is an overview of the process of the draft and how it might affect the A's.

First, here is an overview of the draft itself from MLB.com's own Rule 5 Draft FAQ:

What happens when a player is selected in the Rule 5 Draft?

A team that selects a player in the Rule 5 Draft pays $50,000 to the team from which he was selected. The receiving team must then keep the player on the Major League 25-man roster for the entirety of the next season, and the selected player must remain active (not on the disabled list) for a minimum of 90 days. If the player does not remain on the Major League roster, he is offered back to the team from which he was selected for $25,000. If his original team declines, the receiving team may waive the player.

Once a player is selected, he is automatically assigned to his new organization's 40-man roster.

Can any Minor League player be drafted?

All players on a Major League Baseball team's 40-man roster, regardless of other eligibility factors, are "protected" and ineligible for the Rule 5 Draft.

Can players selected in the Rule 5 Draft be traded?

Teams may trade a player selected in the Rule 5 Draft, but the same rules regarding roster placement apply to the player's new team.

In what order do teams draft?

Teams draft in reverse order of the regular-season standings. Any team that does not have any vacancies on its 40-man roster may not make a selection.

Are there different phases to the Rule 5 Draft?

In other words, the A's will need to clear 40-man spots if they wish to participate in the Rule 5 draft, taking place on the last day of the Winter Meetings (December 12th).  They can do so by waiving, designating for assignment, or trading players currently on the 40-man roster.

Here is what the current 40-man roster looks like from the A's official site, as of the publishing of this article: 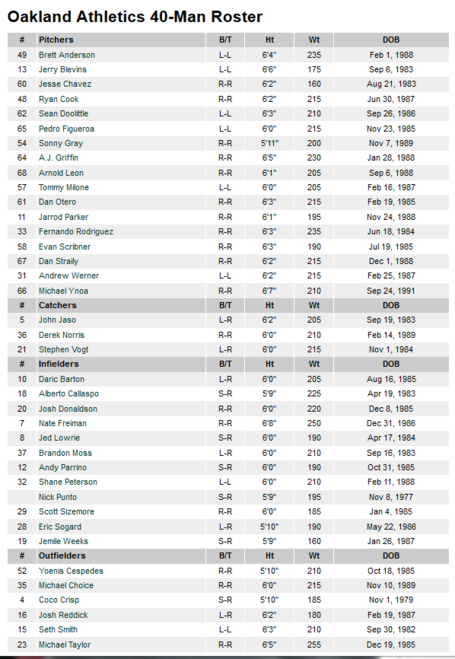 Doing the counting, that leaves 2 spots available for any potential Rule 5 selections.  Or, it could be that the A's will not participate in the draft, and use those two spots to protect minor leaguers who would otherwise be exposed without being put on the roster.  I would imagine the A's have some players in mind to fill specific roles; indeed, Nate Freiman was a Rule 5 draftee last year that the A's claimed from Houston and kept on the roster all year.  He was able to replace the traded Chris Carter as the right-handed half of the first-base platoon with Brandon Moss.

Update: According to this tweet, the A's have added Raul Alcantara to the 40-man roster, leaving them with only one remaining roster spot for the draft.

It is unclear if this is the only move the A's will make.  Keep in mind that NOT protecting a player does not assure his drafting.  Indeed, a team can "bet" on who will be drafted and plan their roster decisions accordingly.

What other players should the A's protect, if any?