After a controversial call, I like to check in to closecallsports.com the next day and see their step-by-step breakdown of the play in question. They offer easy to understand breakdowns of the rules, and what I like about it is they explain the rules in a way where it is easy to discern where the arguments lie.

I've been reading a lot of "the result of fan interference is an out." This is not quite correct. Rule 3.16 is not a rule that's supposed to favor the visiting team; that is, it's not a rule designed to discourage fan interference (for that you turn to the Comerica Park Guest Code of Conduct) by penalizing the home team like the now rarely-enforced crowd noise rule is in the NFL. Rather, it is a rule that essentially calls on the umpires to assess what would have happened absent the interference, the umpire to make the judgment from the moment the interference occurred.

I encourage a good read of the post at closecallsports, and below is a flowchart for how to assess the call under Rules 3.16, 2.00, and the commentary, along with comments from Gary Darling which explain the judgment calls. Closecallsports also chides Gary Darling for incorrectly signaling home run when he should have signaled fan interference, and then awarded a home run as his judgment for nullifying the act of interference. Click here for the best resolution if you can't read the words. (I am aware that I have misspelled "batsman") 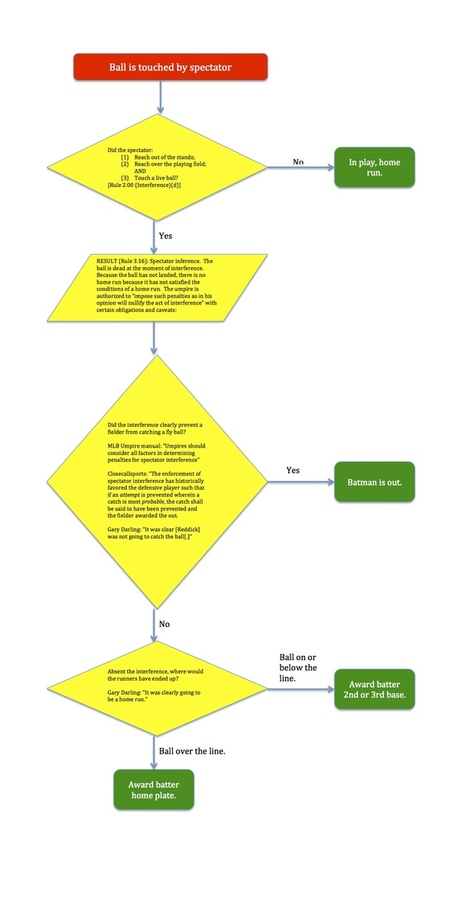 What is apparent to me is that our argument lies not in an incorrect application of the rules, but in Gary Darling's judgment. Was his justification after the fact? Sure, just like any umpire statement to the pool reporter after a controversial call. Were his mechanics wrong on the field? Sure, but assuming Darling's post-game statements are true, the result is the correct call.

If anything, the replays offer an awful angle. Time and time again we see dependence on television cameras that are not necessarily set up to give the best angle on in the air boundary calls. Much better would have been a camera on the fence at the level of the yellow line. MLB must augment the television angles with its own boundary cameras if it wants the best use of replay. A cheap camera with so-so resolution is of far more use than an HD camera sitting at a useless angle.

One final point, closecallsports astutely observes one of the Rule 3.16 comments cited in favor of the home run is wholly inapplicable. The comment, "If the fielder reaches over the fence to catch the ball, he does so at his own risk" is inapplicable because the ball was dead the moment the spectator touched the ball. At the moment the ball was touched, Reddick was not reaching over the fence.