Kurt Suzuki started the 5th most games at catcher in franchise history.

That's 5th most for the full franchise, 1901 to now. 112 years from Philly to Kansas City to Oakland.He started 669 games, getting to that total at a rapid rate by playing in 130+ game each year. Perhaps that was too many, perhaps not. Like everything in baseball, you can break down a player's time with the A's by stories or by stats. sc00by wrote an excellent piece on various highlights from Suzuki's time with the A's. So check that out.

The story of "stats" Kurt with the A's can pretty well be summed up in one graph: 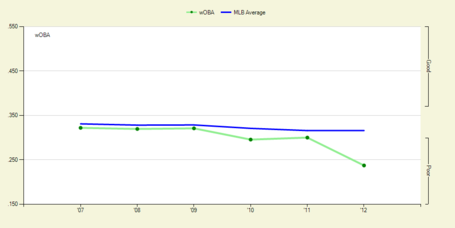 That chart tracks wOBA, one of those advanced, all-encompassing offensive stats. However, the trend looks rather similar for the classic stats like AVG. All long time fans know the story. Zooks exploded on the scene boasting a league-average bat (fantastic for a catcher) and built a reputation as a great game-caller and good defensive catcher. The bat started to slide in 2010 and fell off a cliff this year. Derek Norris turned Suzuki into a 2012 Wally Pipp (click and learn if you don't catch the reference) and so Suzuki was sent away.

By WAR, Suzuki comes in 6th all time among A's catchers. The top 10
(note: this is from just time with the A's, and wow, Schang was an A's player!)

Zooks bounces around 5th to 10th in all the usual stats. You can play around with the A's catcher leaderboards here on fangraphs. Clearly Cochrane stands alone, a Hall of Famer. Steinbach and Tenace were vital cogs in World Series winning lineups. Then there's guys like Suzuki. A quality MLB player, but a guy who you can't quite call a star.

After the jump, we'll use Mr. Peabody's Wayback Machine to visit Suzuki's peers. It's a fascinating group of those other major leaguers - the one's who weren't stars, but also weren't scrubs. Loved in their home cities and perhaps nowhere else. The place Suzuki will likely reside historically. For what it's worth, I'm glad to see Nats fans seem excited about their new player.

Without further ado, I present the A's "5th most starts at each position" All-time Team.

Note - all quotes were captured from the hyper-linked articles (most link to sabr.org)

It's all already been said. If you have a fond memory, please post below.

Wow, we really don't develop 1B on this team. Siebert was a so-so guy on a bad 40's Athletics squad. He's known more for his 30+ coaching tenure at the University of Minnesota where he won multiple College World Series. In 1940, Siebert twice broke up eighth-inning no-hit bids by Bob Feller with singles and became known as "Villain" Siebert in Cleveland.

Dykes had an MLB career spanning 40 years MLB, 22 as a player and 21 as a manager. Dykes was a 20's era super-sub of the Zobrist/Young mold. He hopped between 2B/3B/SS and once played 7 different positions in a single game. He started 800 games at 3B, thus his listing here, but overall played over 1,700 games for Philly. So he doesn't quite belong in this group Beyond the fielding Dykes could hit, often winding up top 10 on AL leaderboards. Making his debut in 1918, he was the first building block of the late 20's dynastic A's team featuring HOFers Cochrane, Foxx, Simmons, Grove, and was critical to the success of the back to back World Series wins in '29 and '30. He was also a notorious umpire-baiter.

A Bay Area native (born in SF and a Tamalpais High School, Mill Valley alum), DeMaestri was a weak hitting, slick fielding SS for the A's during the transition from Philly to Kansas City. He did manage to get onto one All-Star team. He was also good enough to get the "call-up" to the Yankees during the period when all the good A's were sent to NY in lopsided deals. He was part of the same trade as Roger Maris. In NY, he was able to play in the 1960 World Series. Fun quote about that opportunity:

It's what every player wants to be able to do. For me, I think back and wonder how I made it this far. There were only 16 Major League teams so there was always someone ready to take your job.

Hmm, something to ponder as we watched this adage unfold again with Norris supplanting Suzuki this year.

Many MLB players had a career interrupted by WWII. For Gus, he only had a half season of D-ball under is belt before being drafted. This delayed his MLB debut 'till age 26, after which he quickly established himself as a premiere slugger, bashing 220 HR in an 8 year span. Bill James rated Gus the 96th top left fielder of all time. Sadly these years were wasted on a team routinely losing 100 games each year.

Finally, another player from Oakland! A classic switch-hitting, speedy lead-off hitter, North was the center fielder for the A's '73 and '74 World Series winning squads. North was a a brash loudmouth. He debuted with Cubs, who could only handle him for 2 years (despite the obvious talent) before dumping him on the cheap to Oakland. Manager Dick Williams took an immediate liking to his new speedster, "the only player I've ever seen literally strut on to a world championship team. [Williams] saw North and thought, 'This will be fun.' North, along with many A's of the time, got into several fights over the years, both with each other and other teams. The most famous incident was The Fight (capital letters!) with Reggie Jackson. Jackson and North had been in a feud for months and finally just duked it out in on the clubhouse floor, full in view of teammates and sportswriters (Ray Fosse injured himself breaking up the fight and had to be put on the DL). North has a mixed reputation - a hothead trouble maker but also a hard playing lead-off man who stole 395 career SB (71% success rate) and did whatever it took to win ballgames.

Random Fact: North was the first guy to ever play the DH slot for the A's.

Valo was a teammate of DeMaestri and Zernial. In many ways, I can imagine those three as the fore-bearers of Kurt Suzuki and Mark Ellis. Good but not elite players stuck on bad teams. Valo was a native Czechoslovakian, the only one to spend significant time in MLB. If you think Billy Beane was the guy who figured out walks were undervalued, think again. Connie Mack, legendary A's manager for 50 years, was hamstrung by budget in the 40s. Valo was one of a half-dozen A's around the time who put up 100 BB seasons while not slugging at all (Ferris Fain, Eddie Joost, Wally Moses, Bob Johnson, ect.) Valo was a complete player who always gave 100 percent and was well liked. Though not a graceful outfielder, he used his sprinter's speed, superior leaping ability, and sheer determination to make up for any deficiencies.

Random Facts: Valo was a part of three franchise moves (Philly A's to KC, Dodgers to L.A., and the Washington Senators to Minnesota). Valo is the only MLB player to endure two 20-game losing streaks.

Yeah, Baines looks a bit weird on this list. The DH being a much newer position, Baines' two and a half seasons with Oakland are enough to reach Top-5 on this list. Baines had a 22-year career, moving to DH at 28 and never looking back. He was a solid all-around hitter with a career .289 / .356 / .465 slash line. A 30 2B, 20 HR kind of guy. He was acquired by the A's late August 1990 for the playoff push as they tried to defend the '89 World Series. Baines did great in the ALCS but was horrendous (him and everyelse) in the 4-0 loss to the Reds. Baines would stick around the next two years, providing solid DH play in the twilight of the Bash Brother A's. An outstanding 1991 season sent Baines to the All-Star game alongside teammates Rickey Henderson, Mark McGwire, and Dennis Eckersley.

A few parting thoughts on the All-Time #5 GP Team.

It's a very mixed bag of circumstances that keeps a player on a team roster for a long time. Some great players are dynasty backbones like Dykes and Murphy. Others suffered the MLB curse of grinding out season after season for a losing team. Elmer Valo never did make the playoffs in a 20 year career. Certainly it saddens me that in the modern game players change teams so often and the opportunities to form a long-term bond between player and fanbase are limited. Something perhaps lost on the modern fan is the fascinating journey of intimately watching a player's career develop. Love or hate Kurt Suzuki, if you followed the A's at all over the last 5 years you knew Kurt Suzuki. He was good for the A's. For a while he was good on the A's. I'll miss you ya good-hearted Hawaiian.