So, my new house is all ready to go for September: 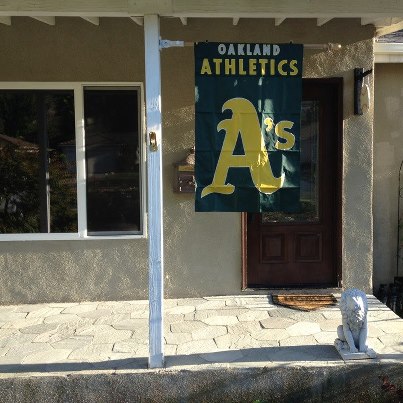 Would anyone in SoCal be interested in getting together and watching a game as we head down the stretch run? I have TVs!

Forgive me if I've posted this every day, but I still can't get over the fact that the A's are fourteen games over the .500 mark, on a hot date with Miss .555, going for their 5th win in a row tonight, and tied for the number one Wild Card spot. You could have told me this in April, and I would have told you that you were crazy, since there is NO WAY the A's would be competing into September. Yet...here we are. The A's have taken the first two games from the Indians, and look to win the series tonight. This could be the win that leads to the series sweep; if Travis Blackley can come up big in his start, Parker would have the chance to finish off the Indians tomorrow.

So I read this article yesterday, advertised on MLB.com, of all places; a basic review of WAR, with the numbers for all 30 teams.

Here is what it has to say about the A's:

The A’s are, by the general numbers, an abominable hitting ball club. They are 13th in runs scored, 13th in OPS, 14th in hits. They strike out more than any team in the league.

I'm nodding my head at this point. Yes, our offense isn't good; didn't you see them strike out sixteen times last night. Oh, and also, they won by 7, but um...wait. I still worry about their offense. And really? Playing to their ballpark? I thought the A's were overachieving (take a look at how much the Angels are underachieving), but it appears to not be the case.

Both those sets of numbers look awful. But one set isn’t as bad as you might think. See, here’s the thing: Nobody hits in Oakland. The A’s pitching staff has a 3.03 ERA at home (they have a 4.07 ERA on the road). Opponents hit .227/.286/.344 in the Coliseum, which you will notice is actually quite a bit worse than the A’s. The A’s can’t hit much. But at home, they just don’t have to hit much.

Oh. Wait a minute. Are you saying that our ballpark is such a poor hitter's park, that you can't really use those numbers to judge the A's offense? And that we actually do "out-hit" our opponents at home? I haven't considered the park influence, and I've been dismissing the A's offense all year. Do I believe this?

It’s been a while since Billy Beane has beaten this unfair game, but you wonder if playing to his ballpark’s strength is part of his new Moneyball plan.

So, is it true? Could the ballpark be skewing this year's A's offense numbers? Should we credit the A's pitching for the wins this season or is the offense contributing more than I have given it credit for? Or is there something else going on?

Blackley will take on Kluber tonight in another 4:05pm start. Join the game thread at 3:30!