As Major League Baseball's owners will reportedly discuss (or not discuss) the Athletics' continued efforts for a new stadium in San Jose, Oakland is trying once again to keep the team. The issue also got some digital ink on Yahoo Sports, which recapped the issues and outlined why a move — to another part of Oakland, to San Jose, to Mars — is proving near impossible.

Earlier this week, Bud Selig's Blue Ribbon Committee met with Oakland Mayor Jean Quan, several local officials, and potential investors, such as Clorox CEO Don Knauss. The subject? A new ballpark by the waterfront, more specifically at the Howard Terminal in the Port of Oakland.

Just a note, according to newballpark.org, it has been 1,245 days since Selig formed this Blue Ribbon Committee.

After the jump, I'll try to wrap up what's going on with Howard Terminal.

The A's take on the White Sox at 4:10 p.m. PST in game two of this three-game series. Travis Blackley starts for Oakland; Francisco Liriano for Chicago.

For those who aren't too familiar with Bay Area geography, here's where we're talking about: 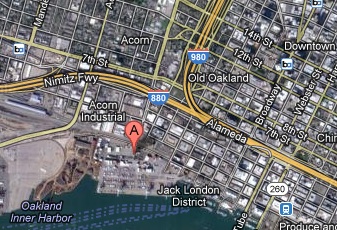 This is the third such Oakland ballpark site drummed up by city officials, having struck out on Victory Court and Coliseum City. A's owner Lew Wolff was quoted in the afore-linked Oakland Tribune story, saying that his team has studied Howard Terminal, "upside down and sideways," but it is not a ballpark-friendly site.

San Francisco Chronicle columnists Matier and Ross summed up Oakland's latest effort, noting that the Blue Ribbon Committee also met with San Jose for an update on its ballpark plans:

But this meeting focused on a waterfront ballpark - most likely at Howard Terminal at the Port of Oakland.

The idea would be for the cash-strapped port to sell the land for a badly needed $40 million - a move Quan might now be able to swing after her recent appointments to the Port Commission.

Although not stated at the meeting, the message was that - contrary to what A's managing partner Lew Wolff says - the town does have a viable plan and site, and if he is not interested in staying, then the team should be sold to someone who is.

Newballpark.org's Marine Layer went to Howard Terminal recently to check it out and study the proposed site. He found a few key issues, such as the need for overpasses over the train tracks (which he said would cost $10 mil. each), a power plant nearby that can't really be moved, and the logistics of parking:

Cost estimation is difficult, but back-of-the-napkin math has infrastructure at $50 million depending on site and foundation, and an ongoing loss of $10 million in fees to the Port with a redone lease and relocation costs. From the looks of things, SSA might play ball if they get their lease redone. If not, what’s their incentive? This reminds me a lot of what the City of San Jose did with AT&T on a rezoning deal near Valley Fair. Considered a quid pro quo deal, we may never know if it really is one unless a ballpark in San Jose is built. SSA appears to be in line for a similar enriching.

SBNation's Grant Brisbee wrote about how new ballparks are Bud Selig's legacy, with Oakland and Tampa Bay being the last teams to move up to cushy digs since the former used car salesman took over baseball in 1992. (Also, Coors Field is the third-oldest National League park!?!?!?). Grant actually thinks that Selig will be determined to get the A's a ballpark in Oakland:

After this comes Tampa. After that … Kansas City? Anaheim? Los Angeles? Selig will worry about that later. Right now, the focus is on Oakland and the secret meetings being held to keep the Athletics there. You might think it's a longshot until you realize that all of the other longshots have shiny new ballparks. There was a time when it was absurd to think that Minneapolis and Miami would ever enjoy a new ballpark, remember.

It'll be interesting to see what comes out of this new development, if anything.