June Lounge: This one has donuts

Share All sharing options for: June Lounge: This one has donuts

National Donut Day is on the first Friday of June each year, succeeding the Donut Day event created by the Salvation Army in 1938 to honor the women who served donuts to soldiers during World War I. 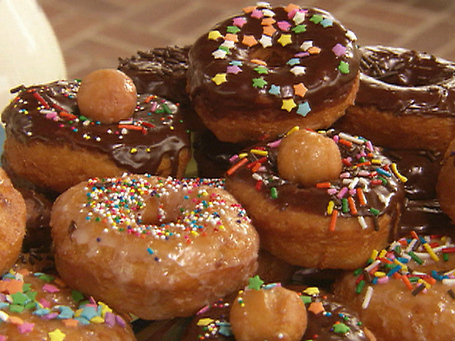 (btw, how come it's so hard to find donuts decorated like baseballs? I think I know my million dollar idea...)

Tonight should be the return of Cespedes, but I haven't seen the move confirmed yet. Manny might stay in Sacramento a little longer, although I'd like to point out to the A's that since their team batting average is somewhere near .210, even Manny's occasional singles could help us right now....(Seriously? .210?!?!?!)

The KC series brings us some daytime baseball on the West Coast, with a 5pm start time tonight, followed by 11am both tomorrow and Sunday.

June brings us the MLB First Year Player Draft, which starts on Monday.

I need to get back to my donut now, so use this lounge as you wish...