Rookies of the Year: Yoenis Cespedes and Bryce Harper

Share All sharing options for: Rookies of the Year: Yoenis Cespedes and Bryce Harper

Okay, first of all, if you haven't yet, go play SB Nation's new Pick 6. This is a completely unprompted review; it's free, easy, addictive and actually really fun. And if you choose "Athletics Nation" as your blog, you compete against everyone on the site, and you get your name posted when you win, over on the left sidebar. You just pick 6 players before the games start, and you see who picks the best six of the day. I think I finished last yesterday, just for the record.

Yeah, I called it. I've awarded the ROY awards a month into the season. (I'm just kidding, if I was to do that, it would be Yu Darvish, who is unfortunately awesome. I was hoping he would not make the Rangers any better than they already are.) But we do have a legitimate candidate for the AL crown, and the A's have a long history of actually winning these awards over players on better teams (see: Ben Grieve, Bobby Crosby, Huston Street, and Andrew Bailey, to name a few).

On the other hand, the NL Rookie of the Year; the most-hyped player in a very long time, made his debut on Saturday night in a ballpark next to my house, so of course, we bought tickets and went to the game. 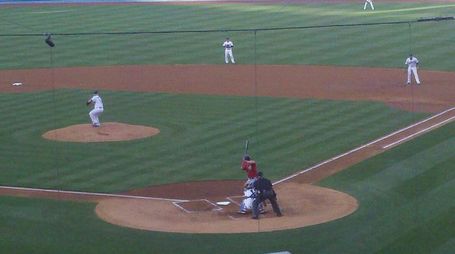 That is Bryce Aron Max Harper, the 19-year-old phenom of the Washington Nationals, who made his major league debut in Los Angeles on Saturday night. Not only did I see him make his major league debut, but I also saw his first major league hit; a double off the base of the center field wall. He also had a sac fly, and rocketed a throw home that would give Cespedes a run for his money. And...he rocks the high socks. What more do you want in the heir apparent to Albert Pujols? And boy, was he interesting to watch. The sold-out Dodger Stadium may have booed him soundly, but there was no denying that the atmosphere was electric every time he was involved in a play, almost as if we were seeing something special. And we were.

Jeff Sullivan, of Lookout Landing and Baseball Nation fame, put together a fascinating article with comparisons between Harper and Cespedes; one of them raised in the "traditional" baseball mold; the other coming straight in from another country to play at the Major League level.

Jeff then splits the first 22 games in half and performs a little analysis on Cespedes. Great read.

So what do you think? Does either player have an "advantage" over the other due to his early circumstances? Do you think either will win the ROY? And what will their future careers look like?

The A's go for the series win tonight against the Red Sox; 4PM start. McCarthy vs. Bard.