Share All sharing options for: A Shutout Performance! Milone Leads A's To Victory!

Despite the lack of strikeouts, Tom Milone has outdone the man he was traded for, going 8 Innings and allowing 3 Hits and 3 Walks, as the A's defeated the Royals 1-0.

The game started in a precarious note, with a Double by Jason Bourgeois, which was undone by an awesome throw by Josh Reddick on a fly out, throw em out double play at third that was on a line to Josh Donaldson's glove at third to catch the advancing Bourgeouis. This would somewhat repeat itself in subsequent innings, with Milone allowing a double in each of the first three innings, before shutting down the Royals for the rest of the night.

On the offensive side of the ball, the A's were relatively quiet all night. The A's managed to score a run in the bottom of the 2nd inning. After a Seth Smith single, a rare Kurt Suzuki walk, and an almost-ground-into-double-play by the newly returned Daric Barton, Josh Donaldson delivered a single to score the A's only run of the night.

The A's managed to tease in the bottom of the 6th. After a Josh Reddick pop out, and a Cespedes strike out (an increasingly all too common sight), Seth Smith walked. Kurt Suzuki then lined a looper to left field, which was misplayed by Lorenzo Cain, allowing Smith to advance to 3rd. Daric Barton, lord of the pool, walked to load the bases, but Donaldson was not able to deliver again, and the A's left them loaded.

The rest of the game was uneventful, with Grant Balfour closing it out for the A's in the 9th. 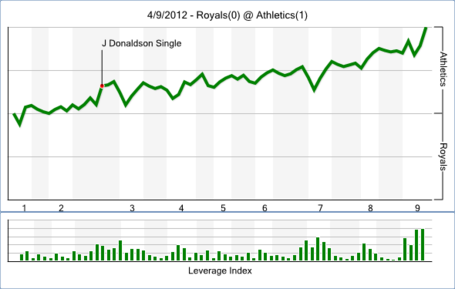 In Other News, Joey Devine saw Dr. Andrews, and thats never a good thing. Its more elbow surgery for Devine, so who knows if we will see Joey in an A's uniform again.