It’s only been 3 starts, but the A’s have yet to figure out Danny Duffy in his short MLB career. After going 2-0 against the A’s last year, Duffy pitched 6 shutout innings, striking out 8, allowing only 1 hit, and walking 4.

Graham Godfrey was "okay" in his 2012 debut, but honestly, it could have been a lot worse. He made it through 6 innings, but lived up in the zone. Compare his K zone plot: 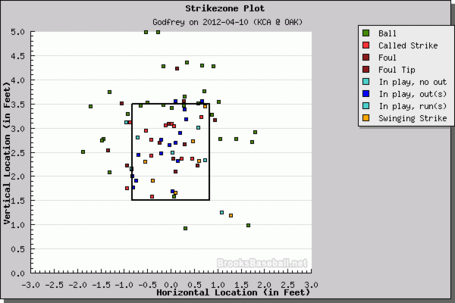 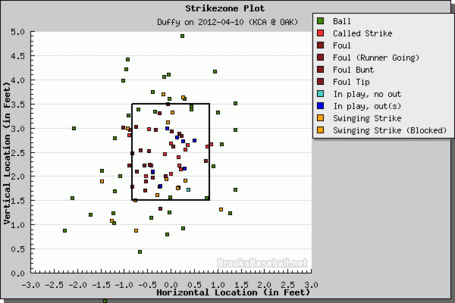 Duffy doesn’t have great control at this point in his career, but he stays in the strikezone with his fastball and buries his curve at the shoes of right-handed batters. He’s going to be great soon, if not very soon.

Each team traded walks in the 1st, thus extending Yoenis Cespedes’ streak of reaching base in each game. In the 2nd, Collin Cowgill made a great leaping catch going towards the fence in RF to rob Chris Getz of extra bases.

The A’s best chance to score came in the 3rd, when a Cliff Pennington double put a runner at 2nd with one out. He was promptly TOOTBLAN’ed, however, extinguishing the closest thing the A’s had to a teA’se all evening. The Royals scored the go-ahead run in the 4th, as a rocket over Cespedes’ head and off his glove scored one and left runners at 2nd and 3rd. Humberto Quintero hit a sacrifice fly to make 2-0. Add in a late HR from Mitch Maier off of Jerry Blevins, and the nail was well in the coffin for the A’s.

Despite the curious lineup today, and the good performance from Duffy, this A’s team looks spookily like last year’s team: not a lot of offense, spotty pitching outside of 2 starters, and defense that should be better than it performs on a regular basis. Of course, it’s early, and those early off days and shorter spring training probably haven’t done them any favors. But, did anyone really expect anything different?

Tune in tomorrow as the A’s attempt to take the series behind Brandon McCarthy. Or, just tune in for Cespedes.