Open Thread for ST Game #6 and what storyline are you keeping tabs on?

Share All sharing options for: Open Thread for ST Game #6 and what storyline are you keeping tabs on?

According to a twitpic from the great Susan Slusser, here is the lineup for today's full squad game today vs. the Brewers: 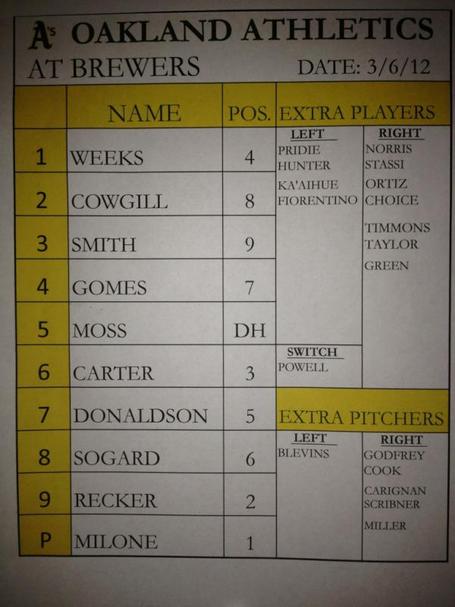 While the lineup itself isn't bad, check out that IF defense:

This brings me to a question posed on the latest episode of (warning: shameless plug!) @TarpTalk. What ST storyline are you following most closely?

For me, despite the setbacks for Barton, the real battle in ST is the 1B/OF/DH shootout. If I'm Chris Carter, I am scared out of my mind (for good reason) that this is my last and best chance to make the 25-man roster. With Manny Ramirez coming back around May 30th, that gives Carter not only an ST battle to win out, but also about 50 games to prove he can hit MLB pitching. After that, though, it's entirely possible the A's will move on to a new plan, whether it's the next veteran DH flavor-of-the-season, Seth Smith, or someone else entirely.

If I'm Kila Ka'aihue, I'm trying to be the dark horse guy. While the other three guys are either injured or ineffectual, I also have one last chance to prove to an MLB team I can stick. If I'm Daric Barton, I know I can play superior defense, but was that 5 WAR season a fluke?

Finally, if I'm Brandon Allen, I might hit a Grand Slam and two-run double in the same game. Check.

Not all of these guys will make the OD roster. I'm hoping for stiff competition, but thinking the winner could also end up stumbling across the finish line, just barely eking out the others.

What storyline are you watching for?

Return at 12PM PST for game thread action and Vince "Vince" Marotta's call on MLB.com. If you haven't yet gotten Gameday Audio, what are you waiting for?