Share All sharing options for: A's arrive in Japan

The A's, with help from a sleep specialist, have arrived in Japan for exhibition games with the Yomiuri Giants (anyone know the Japanese translation for f--k the Giants?) and Hanshin Tigers, and then their opening series with the Seattle Mariners.

The Chronicle posted a slideshow of the players' arrival that's definitely worth a look-see.

Yoenis Cespedes announced his presence with authority during batting practice at the Tokyo Dome.

The center fielder sent numerous balls sailing deep over the fence during the A's first workout at the Tokyo Dome on Saturday, including two that landed several rows behind the center field wall. His display drew noticeable reaction from the crowd of onlookers.

A's manager Bob Melvin, who was pitching, was asked his impressions of Cespedes.

"(The same thing) I always think when I throw batting practice to him," Melvin said. "I duck behind the screen so I don't get hurt."

The A's face Yomiuri on Sunday (7:06 p.m. in Japan/3:06 a.m. in Oakland) with Tom Milone taking the hill against the Giants. The next day, Oakland faces Hanshin (12:06 p.m. Monday in Japan/8:06 pm Sunday in Oakland). Opening Night is Wednesday against Seattle (7:10 p.m. in Japan/3:10 a.m. in Oakland). These games will not be televised live, but shown on tape delay on MLB Network.* I've heard that Ricky's in San Leandro will carry the games live.

*Am I alone in believing that if that team from San Francisco was playing, Comcast Sports Net or MLB Network would televise all games live?

A group of A's players were set to go karaoke singing Saturday night.
Outfielders Josh Reddick and Collin Cowgill were planning to go, but word throughout the clubhouse is that Allen is the team's best singer.

Allen is one of the quieter A's players, but he sang "Ain't No Sunshine When She's Gone" for one of the team's commercials

Players' wives, broadcasters and other A's officials recently went on a Japanese tour.

The first stop was at the Hakone Ropeway, a ski gondola that sits on the banks of Lake Ashi and glides more than two miles to an observation deck where one can view Fuji (if the mountain cooperates) and the surrounding volcanic peaks with steam rising from their sulfuric pores.

The A's contingent braved ripping winds and cold temperatures at the top, but many were smiling and quick to note how special it was to be visiting such an awe-inspiring land.

"Seeing Mount Fuji for the first time, it looks completely different from what I thought it was going to look like," McCarthy said. "It's almost like an iceberg, with a massive base that just goes up slowly, snowy peaks ... it's really beautiful."

One player who wished for a happier ending to Spring Training? Coco Crisp. (Monte Poole warning)

"There's an adjustment period that has to be made and a willingness to get better over there," he adds. "For someone like myself -- someone not really 100 percent onboard -- it takes . . . it's a challenge to trick yourself to be 100 percent on board."
Voiceless in this matter, Crisp spent the days leading up to Oakland's trip to Japan trying to digest reality. It's not going down well. He's 32, a 10-year veteran who last year led the A.L. in steals and played excellent center field.
His bosses realize this move, to which the A's are committed, at least for now, annoys Crisp. His teammates know, too, including Yoenis Cespedes, a rookie from Cuba who is being installed in center field.
Crisp, who spent the past two seasons in Oakland, re-signed Jan. 5 with the belief he would be in center, as he was throughout 2011. A little more than a month later, Cespedes, new
to American professional baseball, signed the second-biggest contract in A's history: $36 million, over four years.
And now, four weeks into spring training, Crisp is displaced by the new guy. It's a demotion in status, a form of rejection.
"He's disappointed, no doubt about that," manager Bob Melvin says. "And I understand totally.
"I don't envision him being a problem, but he's disappointed. And I understand why. He's a terrific center fielder, and he's being asked to do something that's uncomfortable." 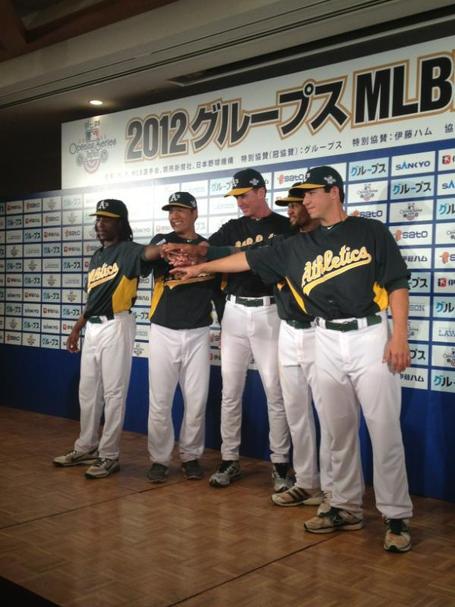