You know what's awesome about being an A's fan today? We never have to worry about being pinched.

St. Patrick's Day is actually not about driving the snakes out of Ireland — that's more legend than fact. It's more of a celebration of St. Patrick, known as Ireland's Patron Saint.

It is also not about momentary A's catcher Michael Patrick Barrett, though he should be canonized for this.

Here are some other famous Patricks who have worn green (and well, sometimes blue) over the years.

The Athletics take on the Cubs and Giants in split-squad action today. Both games start at 1:05 p.m. Do us a favor and pinch a Giants fan today.

In no particular order: 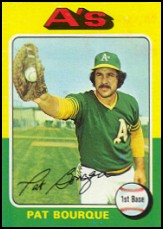 RHP Sean Patrick Gallagher, 2008-2009 — Acquired from the Cubs for Rich Harden and Chad Gaudin, Gallagher battled injuries throughout his brief tenure as an A.

LHP Jeff Patrick Kaiser, 1985 — Kaiser's career is full of cups of coffee. Given the results, those cups were probably spiked with Bailey's.