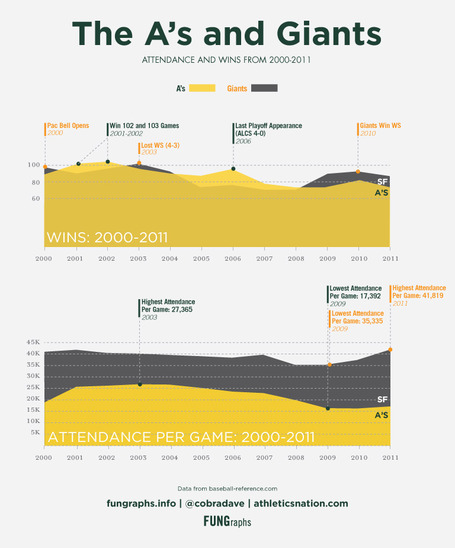 In response to a post from last week from Ciderbeck, In Defense of Oakland-Alameda County Stadium, I took a stab at showing how the A's and Giants fared from 2000-2011.

Giants built Phone Booth Park and Barry Bonds started shattering home run records. Suddenly 40,000 people a night were Giants fans. Really bad timing to go on our own run. Despite the huge draw in SF, Oakland attendance still jump from around 15,000 pre-Big Three to about 25,000 during the early 2000s run (good for 6th to 7th ranked AL attendance).

What can we gather from the past 12 seasons?

An interesting thing to note, during this time period, the A's have made it to the playoffs more than the Giants (A's: 5, Giants: 4).

Check out more infographics at FUNGraphs or follow me @cobradave