Share All sharing options for: SBN Winter Meetings Sim Wrap-Up, Part 2: Everything Else

The biggest question mark before I started was how much I could reasonably make the A's payroll. I started out by looking at the Cots Baseball Prospectus Contracts page to see the A's payrolls over the last few years. Here are the Opening Day payrolls taken from Cot's:

Given that 2011's payroll was $67M, and last year's was the lowest it had been since 2008, I figured at least $67M was in order. I didn't really set a true budget for myself, but I did not want to go over the $79.3M that was spent in 2007. Wolff has made several comments in the past about how the A's attendance actually decreased that year, and to me that means he would never put that much into payroll again unless he thought it was warranted through increased attendance.

With all my signings and trades, I ended up with a payroll that is a tad under $70M. That will probably be more than that real 2013 A's have in payroll, unless they assume another salary via trade. That said, I firmly believe that with this payroll flexibility, the A's should be focused on assuming salary in trades and signing free agents, rather than trading away prospects or current regulars in order to improve the MLB team. I came into this simulation knowing that this is what I wanted to do, and I mostly stuck to that.

The only quibble I would have with the simulation system, and one that Max also pointed out, is that the system rewarded teams who offered more years rather than fewer years. Again, the real Nakajima will not get $30M over 3 years, but it was very simple for me to outbid the next team by offering a third year + option/buyout. The same goes with Colon: my initial offer to him was 1/$6M, and I received a 1/$8M counteroffer. Rather than taking that, I decided to offer him a second guaranteed year since I could spread the contract over 2 years. Other teams got creative, by essentially offering incentives they didn't have to pay for or count in their 2013 payroll.

I went over some of these in Part 1, but I had a couple trades I tried to work on but ultimately fell through.

This was the first thing I tried, and it sort of went nowhere fast. I started out by offering Straily for Myers straight up, and the Royals GM wanted a top flight starter. Parker, without explicitly naming him. I tried to sweeten my offer with Gray and Cook, but there wasn't enough of a deal to get it done. The Royals GM correctly pointed out that Moore has one more year of team control with the extension he signed, and that Myers will have a little less than 7 years of control if they bring him up in late April. I pointed out that Moore was generally league-average in 2012 despite his better pedigree.

Here was my reasoning for offering the package I did, which I also posted on the Royals side. Say that Straily is a 3-4 win pitcher going forward, Gray is 2-3 wins, and Cook is 1-1.5 wins. If you take the conservative end of each estimate, you're getting 6 wins spread across 3 players. Is Wil Myers a 6-win player going forward? I don't know, but it's putting a lot of faith in one guy if so. Sure, ideally, the Royals want their wins consolidated in as few players as possible. But the Sim Royals have had multiple rotation spots open. Straily and Gray would theoretically take up two spots, one now and one in 2014, which would free up money to get other pieces they need.

Also, from a philosophical perspective, why should I present my best offer up front? I know that Parker + another guy is probably what they want, but I like Parker. If I can get them to take Straily, who I also like but not as much as Parker, why should I just offer Parker right away if I don't have to?

The initial proposal was that, but I didn't want to give up Milone. I think he's durable, and a perfect 3-4 guy. I went back and forth with the Brewers guy, offered up Peacock and tried to find a non-Milone that worked, but he was stuck on him and I let it go. I was hesitant on this one due to Ramirez's high salary, and because I did want to re-sign McCarthy in the sim and make sure I had the money to do so. Once I offered 3/$30M + Club Option/$2M buyout to him and that was blown out of the water, though, Ramirez was gone to the Braves.

Honestly, this was pretty stupid and I don't know why I offered it up. Lowrie is good, but Cole has 1-2 starter potential even if he is still struggling down in A-ball. I'm glad I doubled-down on my promise to spend money instead of prospects.

I also offered up Green or bullpen pieces here (Cook), and he eventually asked for Griffin or Anderson and I said no. Not going to part with relatively cheap young pitchers for an older guy whose salary I'm also paying for.

So, this is what my roster would look like: 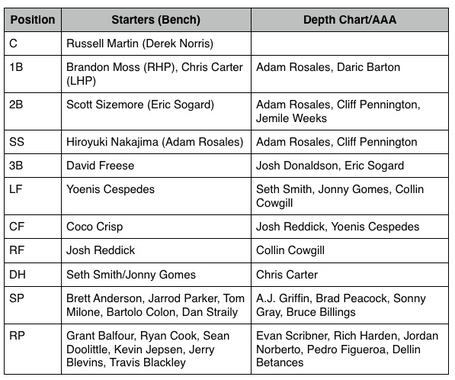 Which would yield a lineup of this:

I like how my team turned out. As it happens, neither the Sim A's nor the real A's will have Brandon McCarthy, but I still think the rotation will be okay provided there are no catastrophic injuries. The lineup I am particularly proud of, because I think I upgraded at logical positions (C, 3B, SS) while keeping the players who are bound for regression in the organization. In other news, my Rivercats will also have a pretty good team, with possibly Josh Donaldson, Jemile Weeks, Cliff Pennington, and Daric Barton as starters there.

I really liked doing this, even though I was hesitant about the time commitment. It was cool making friends (or enemies?) of other bloggers from other SBN sites and seeing how they valued their guys.

So, Billy, if you ever do decide to step down, you know who to call. Cup for GM?