As we not-so-patiently wait for the 2013 baseball season to start, it's nice to see who is attending Spring Training. If you have never been, you should really consider going this year.

Share All sharing options for: Spring Training 2013 - Can We All Just Go This Year?

First of all, check this Co-Co Lantern from new AN user, fossizboss, who took my pumpkin carving challenge seriously. 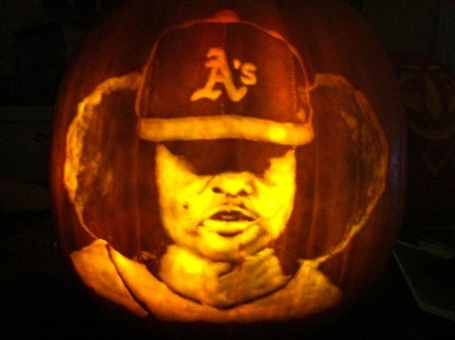 Good news! A's Spring Training tickets go on sale in the first week of December. Who's planning on going?

Remember, this is the first year that the AL West includes the Houston Astros, and at least right now, it's a net win for the Division. From The Examiner:

In order to balance all divisions, Major League Baseball has transplanted the National League's Houston Astros into the American League Western Division starting 2013 so they are to become familiar opponent at the A's home venue. The Astro's have lost in excess of 100 games per season in 2011 and 2012. Oakland won a shocking 94 games in 2012 and will be looking to compile a second consecutive winning season.

The Athletics kickoff 2013 regular season play at home on March 31st against the Seattle Mariners.

I just like how that is phrased. A "shocking 94 games" seems fun. Also, how many years in a row are we going to lose the home opener? At least we don't have two openers this season, and one isn't in the middle of the night. It's crazy, really, thinking back to that Japan game. I gave the A's little to no chance of winning the Division back then; yet 94 shocking wins later...

But I digress. Here is the Oakland Athletics 2013 Spring Training schedule, which begins on February 23rd. That is not very far from now, let me tell you!

So who is attending? Who has never been? Who needs answers on hotels, cars, tickets, etc? It's so much fun; you should go!