A September to Remember (INFOGRAPHIC)

One of the stats we've heard the most on TV and radio during the course of the past week was that the A's were 13 games back of the Texas Rangers heading into the 1st of July. Finishing that month 19-5, there was a ton of ground gained in July, but facing a ROUGH September, including holding the toughest remaining strength of schedule in September, how did the A's do it?

Share All sharing options for: A September to Remember (INFOGRAPHIC)

As quoted in Joe Sheehan's mentioned on the 7th of September, he lays out the difficult month of September that the A's had to get through to even hold on to at the very least, the 2nd Wild Card.

Holding the American League's No. 2 wild-card slot, the A's will play the toughest schedule -- a .548 SOS -- of any contender, and they will play 17 of 26 games on the road. After a three-game set this weekend in Seattle, the A's play 17 straight games against contenders, including a vicious road trip to Detroit, New York and Texas starting September 18.

The A's finished September with a 17-11 record (including 8-2 over the last 10 and finishing strong 6 straight to lead to the AL West title). 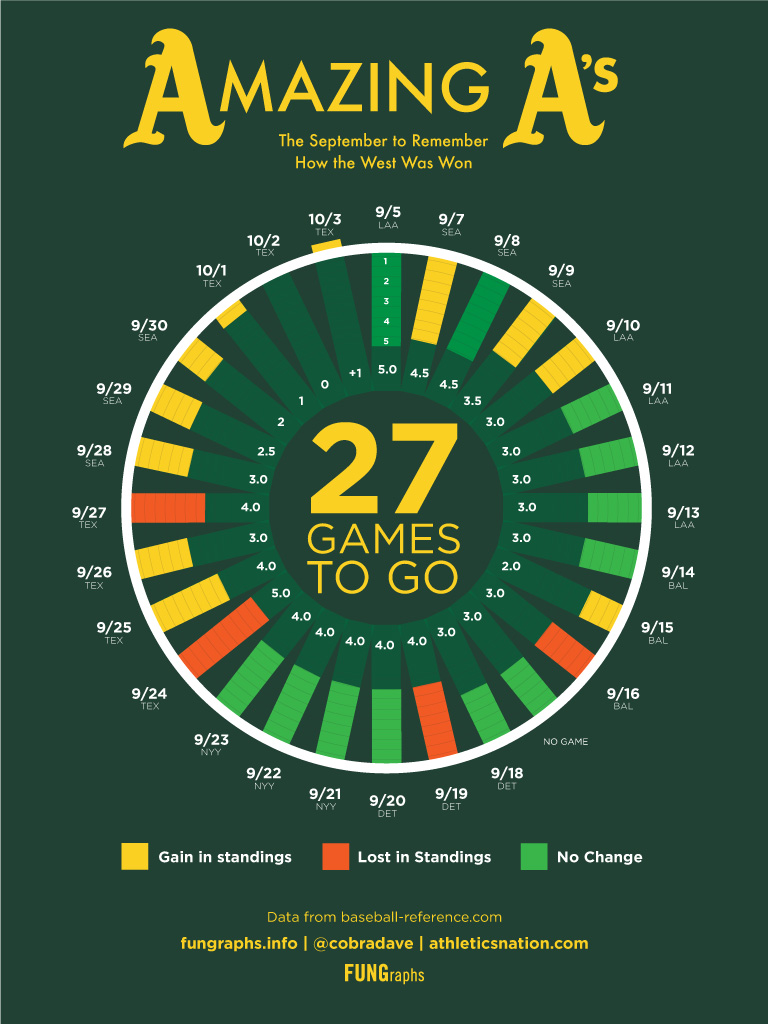 Starting with the end of the Angels series on 9/5, we look at how the A's gained ground. Although they lost 9 games in during this time period, they only lost ground in the standings 4 out of 9 of those losses, and never gave up a game in standings after 9/27. What a great time to be an A's fan!

Check out more infographics on FUNGraphs or follow me on @cobradave