Hello! If you haven’t seen me commenting on various posts around here before, I’m cuppingmaster, a die hard A’s fan living in Los Angeles. For at least the next 6 weeks, I’ll be the regular Tuesday morning front page writer. My baseball interests lie more towards pitching than hitting, but that said, I’ll try and make my contributions interesting to as wide an audience as possible. Indeed, if you have an idea for something you’d like me to explore, please shoot me an email and I’ll see what I can do. I’m always looking for good ideas and feedback on my posts.

When he wasn’t tweeting, Brett Anderson was the one of the most exciting young pitchers in the American League before his unfortunate Tommy John Surgery (TJS) in July of last year. Received as a high-upside piece in the Dan Haren trade of 2007, Anderson had excellent minor league DIPS component statistics in 2008: K% of 25.7 and 30.4, BB% of 5.8 and 7.2, and allowing only 8 HR in 19 starts split between high-A and AA, respectively. In his MLB career, his DIPS stats have also been very good: K% of 18.3, BB% of 5.9%, and a 9.9% HR/FB rate. In addition, his groundball/flyball ratio (GB/FB) skyrocketed from 1.49 to 2.32 during his career. While an excellent development, this may have belied a larger problem: a glance at PITCHf/x data shows a decrease in the use of his fastball and an increased use of breaking balls over time. That said, from these component statistics, his FIP remained consistent over time: 3.56 in 2009, 3.62 in 2010, and 3.66 in 2011.

As many A’s fans know, Anderson also had two stints on the DL before finally having his surgery last year. Given his success in essentially transitioning away from being a power pitcher, I asked the question: "What kind of pitcher might Anderson be upon his return from surgery?" With this, it became prudent to find comparables. In this case, I set some general parameters on pitchers I wanted to compare Anderson to: 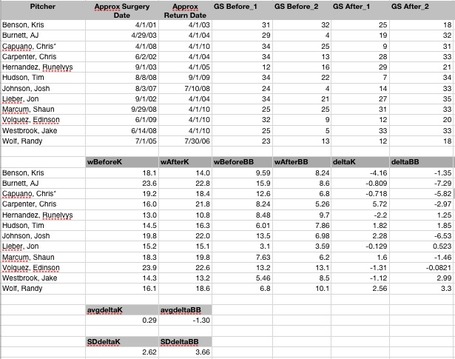 *Chris Capuano has had two TJS'. For these purposes, I only used data from his 2nd surgery

The one thing that stands out is the extreme variability of the data. Chris Carpenter improved his K% by almost 6%. Poor Kris Benson struck about 4% fewer batters. Josh Johnson walked about 6.5% fewer batters. Poor Randy Wolf increased his walk rate by 3.3%.

In general, however, it appears that of the pitchers who do make it, control may improve post-TJS. This result is unlikely to be statistically significant, but may represent a trend.

What does this mean for Anderson? Well, if walk rates DO improve post-surgery, this may regress his 2011 walk rate back towards his career average of 5.9% (from 7%). Of course, the bigger problem is making it back: these 12 pitchers are the ones who meet my parameters set above. Many other pitchers have failed in their recoveries. That said, the largest subset of pitchers I did not include in this analysis are pitchers who had TJS in the minor leagues or in college. Many have gone on to have successful careers.

While Tommy John surgery has had a chance to be perfected since its first use in 1972, and many pitchers have had it since then and become MLB pitchers, it's still a risk. In not comparing him to all pitchers, I'm ignoring the non-zero chance that his recovery stalls and he simply does not return. Indeed, according to a 2010 article published in part by the maven of TJS himself, Dr. James Andrews, out of 45 MLB pitchers who have had TJS from 1988 to 2006, 34 have returned to the same level, 4 did not return and 7 returned to a lower level (MiLB) after 2 years of follow-up.

In addition, in not using relief pitchers, I am cutting out a significant chunk of data that could be useful, considering that I am only comparing DIPS statistics. However, there is at least some debate on whether that is the most appropriate way to study relievers. So, I decided to stick to direct comps and have a smaller amount of cleaner data.

Velocity measurements, which directly influence DIPS statistics, are not used. As I mentioned above, while Anderson's pitch types changed over time, it is impossible to determine at which point his ligament injury might have caused this. This is also one reason why there is an illusion that pitchers who have TJS return with greater velocity: no one knows when the degradation of the ligament in question started.

Finally, with the temporary demise of Driveline Baseball's InjuryDB, there may be pitchers I have inadvertently left out of this study

There aren't a lot of comparable pitchers, are there? While it's a commonly held belief in the baseball community that TJS is a "sure thing", that really doesn't provide a lot of nuance.

Some sort-of-good pitchers have had TJS

Anderson may, or may not return to his prior level.

If he does, he'll join a relatively exclusive club of pitchers who have

Thanks to Nico for giving me the opportunity to write here and to David (dwishinsky) for putting in a good word for me. If you want to contact me, you can email, or I can be found on Twitter, laying out my baseball-related and random thoughts throughout the day, or also on the TarpTalk podcast I record weekly with three other NRAFs, including David. See you next Tuesday!