2012 Projected Standings (from our friend MARCEL)

Share All sharing options for: 2012 Projected Standings (from our friend MARCEL) 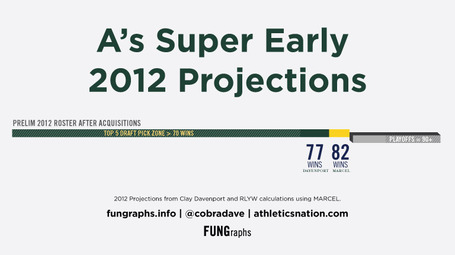 Piggybacking off the success of my post about the 2012 Davenport Projected Standings, here's what RLYW's got in terms of some also ridiculously early standings projections using MARCEL. Rob Neyer's got a write up on it on Baseball Nation, so figured we can take a look at this a little bit.

As crazy as I thought the original Clay Davenport win projections were at 80 wins, they've since been revised with 77 wins, which seems plausible. Here's how both Davenport and MARCEL look in context.

Just out of curiosity of draft orders and records, I went back and took a look at the records of the bottom 5 teams/top 5 teams drafting and noticed that those teams usually come in at 70 wins and under. A few have won 71 games, but it's safe to say the cut off is 70 games. I suppose the question of tanking and competing is a subject for a different post.

Now I know there seems to be a sense of optimism with the offense shown in these projections. Below is both the updated Clay Davenport projections, as well as the MARCEL projections run by RLYW over the weekend: 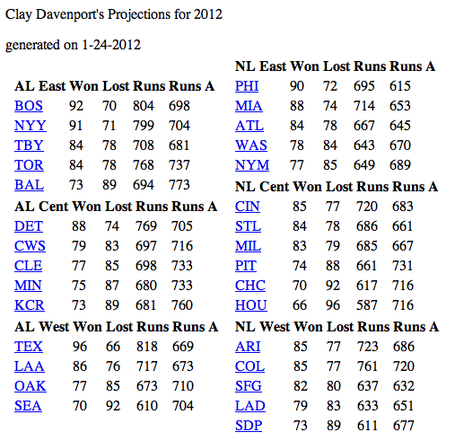 Compare this to some of the runs scored/runs allowed in the past few seasons. I've linked to the Baseball Reference pages for 2010 and 2011 rosters.

In both cases, the Mariners are the ones at the bottom of the AL West standings. The 2010 season where the A's only allowed 626 runs, included good contributions of Gonzalez/Cahill/Braden/Anderson. That staff had an ERA+ of 115, 2nd in all of baseball while the 2011 A's had an ERA+ of 110, 5th in all of baseball. Needless to say, barring instances where Braden and Anderson are coming back from injury, if prospects like Brad Peacock, Tom Milone, or Jarrod Parker can come and and make a positive contributions (1.0 WAR or more), I suppose the 82 wins can be achievable.