I have a long sleeve shirt I bought back in 2003 or so. It's got an A's green hat with the phrase "I Believe" written over it. I know it was an homage to the famous Bull Durham Crash speech (beware if you are sensitive to dirty words, this is NSFW) but it meant more to me than that when I bought it.

Bull Durham's "I Believe In..." speech (via treborcram)

It remains one of my very favorite pieces of A's apparel (I own a lot, about 1/5 of my wardrobe has something A's on it). To me the shirt simply meant, "I Believe" in this small market team. "I Believe" it can compete with smarts, good drafting and a little bit of luck. "I Believe" in Moneyball to put it simply.

Fast forward nine years and it's 2012. The team hasn't made the playoffs since 2006 and it's looking like it will likely be at least another two or three seasons at the soonest when the A's can return to the promised land. For now though, whatever should my favorite A's shirt mean when I put it on? I suppose I still believe in long, slow, soft and deep wet kisses that last three days, but I mean something more related to our favorite ball club. I was thinking of several possibilities and I thought this would be a good game for A's fans to join in.

There are a variety of things it can mean when I put it on now:

I Believe: that rebuilding projects should eventually end in a competitive team, it's just that sometimes they take longer than others.

I Believe: that the postseason remains a crapshoot, it's just that I don't really care about the crapshoot since my team won't make that crapshoot for the foreseeable future.

I Believe: that the potential of a young unproven prospect is much more exciting to watch than an old, washed up one.

I Believe: that tarping a deck of a ballpark to create false scarcity was Lew Wolff's biggest mistake as an owner.

I Believe: the A's will not be a contender again until they find several young power bats to complement the carousel of great pitching.

I Believe: the yellow jerseys are the greatest thing to happen to the A's franchise since the 2002 streak.

I Believe: no one will ever look better in those jerseys than Gio Gonzalez did. 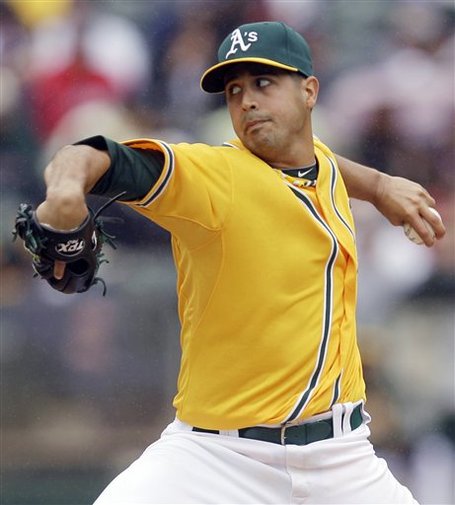 I Believe: that there is something about the Oakland Athletics uniform that literally saps hitting ability away from guys like Matt Holliday and David DeJesus.

I Believe: there are no bathrooms in any stadium I've ever been more vile than the ones at the Coliseum. Urinal troughs? Really???

I Believe: Dallas Braden couldn't get more likeable after his incident with A-Rod and the perfect game embrace of his beloved Grandmother.

I Believe: I was proven wrong when I saw this: 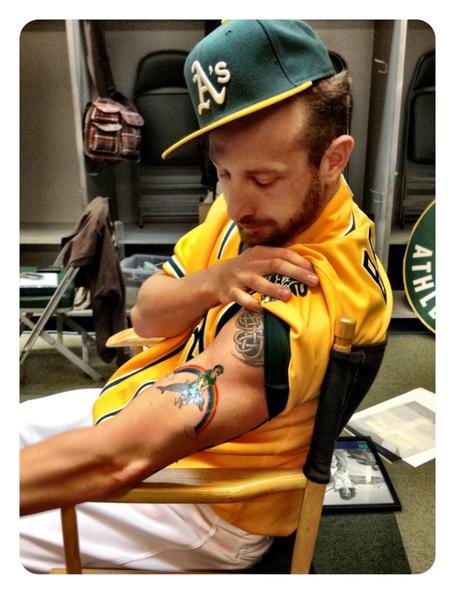 I Believe: what makes baseball unique is the fat pitcher phenomenon.

I Believe: WAR is hell, especially if you're Adam Rosales.

I Believe: Albert Pujols is really 39 years old and that at some point during this season, rats will attack him in the bowels of Angel Stadium and place him on the DL for an indefinite time period.

I Believe: one part of the last statement is actually true.

I Believe: that there is good and evil in baseball.

I Believe: the Red Sox, Yankees and now Angels are Darth Vader.

I Believe: Bud Selig is the Emperor.

I Believe: the A's used to be Luke Skywalker.

I Believe: the A's are now Jar Jar Binks.

I Believe: there will eventually be some movement towards an automated strike zone.

I Believe: nothing in the world tastes better than a hot dog with relish and onions at a baseball game.

I Believe: that the A's must make San Jose happen or they will wind up moving out of state.

I Believe: that is the Giants endgame.

I Believe: in loudly and proudly saying FUCK the Giants.

I Believe: in Billy Beane now more than ever because it's all we've got.

OK now it's your turn to play.