Share All sharing options for: The Butler Did It: KC DH's Two HRs and Laborious Oakland Bullpen Doom A's, 11-6 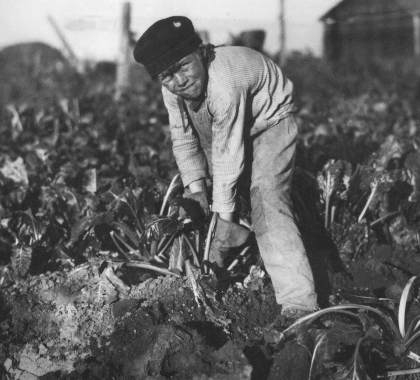 There have been easier Labor Days, let's put it that way. 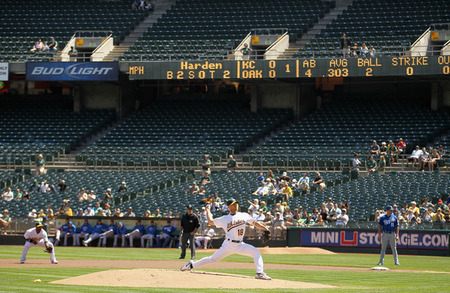 This one got off on entirely the wrong foot, and not just because the groovy Radiohead video I embedded in the first game thread caused some sort of dropped tag issue and the comments to be disabled.  After Alex Gordon struck out to open the game, the next two guys singled and super-stud rook Eric Hosmer knocked in the first KC run with a double, just in time for a more functional thread to be posted so we could all voice our horror at what was going on.  Then, as if on cue, the 1st-inning woes for Harden -- who is the prototypical Canadian in that he takes a little while to get warmed up -- continued as Jeff Francoeur singled for the Royals' fourth straight hit, and before the fans were in their seats it was 3-0 Blue Team.  Rich K'd the next 2 to strike out the side, but our lads already had an early Labor Day deficit to surmount. 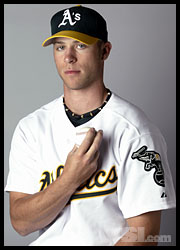 Well, Mr. Batter, we meet at last.  You want a home run.  I want a strikeout, and a big heaping plate of poutine.

The bottom of the second saw the A's bail Harden out of the hole he had dug for himself faster than Tim Geithner bailed out Goldman Sachs as with two gone, Brandon Allen and Ryan Sweeney both walked, setting the stage for some dramatics.  Kurt Suzuki looped a busted-bat Texas Leaguer into CF for the first run, and then Scott Sizemore blasted a bomb straight over the 400-foot sign (it might have hit the top of the wall, according to Ken K.) for a quick script-flip and a tasty 4-3 A's advantage. 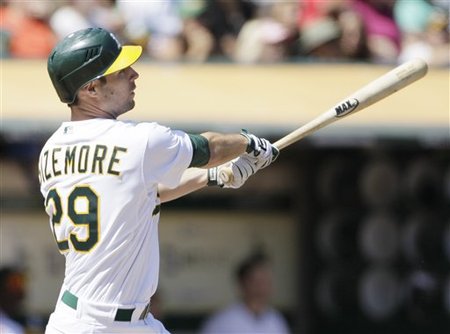 Max gave the A's some short-lived headroom with this swing.

But by now you might have realized that this was shaping up to be a see-saw affair, and it didn't take long for the Royals to get it back.  In the third, Harden -- who essentially struck out nearly every batter he didn't allow to reach base in this game -- surrendered a HR to LF by Billy Butler.  Rich had 8 Ks through 3 innings, but regarding the one number that matters it was still 4-4.  The A's, for their part, got Matsui to second in the bottom of the frame but DeJesus struck out to end the rally and keep the score even. 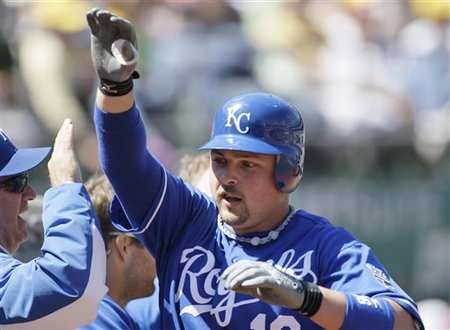 A lifetime of scientific research is vindicated as the laboratory-created spawn of Mike Piazza and Matt Stairs hits it out.

An eventful game got more eventful in the 4th, when the Royals put runners at 1st and 3rd with one out for Alcides Escobar.  Harden ran the count full (kind of a theme for him today) before notching his 9th K on a dastardly changeup for the second out.  Cue the next full count, this time to Alex Gordon, as Harden fell behind 3-0 before evening it up... Gordon walked (Harden's first, somehow) to load 'em up, leaving it to the Melkman.  Cabrera failed to deliver -- it was a holiday after all -- lining to Willingham for the third out as Rich wriggled away from impending disaster like a Canadian Winter Snail. 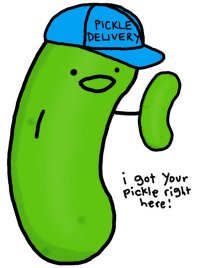 A spectacular DP by the KC Keystone Kombo bailed starter Felipe Paulino out of a two-on, one-out pickle in the 4th, with Harden returning the favor by working out of a similar jam in the top of the 5th, notching his 10th K in the process and ending his afternoon of work.  The A's rewarded him in their half, with Weeks doubling to lead it off and Pennington walking (Paulino's 6th free pass in 5 frames).   The runners moved up on a wild pitch with Hideki Matsui batting; Godzilla ended up striking out weakly, but Josh Willingham put Harden temporarily in line for the "W" with a chopper into left for a 5-4 A's lead... Penny stopping at 3rd and Paulino exiting the game.   The Royals brought in Everett Teaford -- these are the Royals, after all, and they need players that really do sound like royalty -- and he was greeted by a deep LF drive by DDJ, plating Pennington with the sac fly for a 6-4 Oakland cushion.  Brandon Allen -- who never seems to fail to hit the ball hard when he hits it -- made a bid for more with a sizzling liner to RF, but it found Francoeur's glove for the third out. 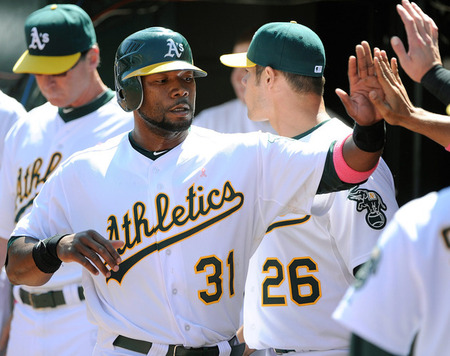 Even though he just made the third out of the inning, Brandon Allen is heartily congratulated by his teammates merely for being Brandon Allen.

But this being Labor Day, you knew you were going to be reminded that you just can't get good help these days.  The 7th inning saw Kansas City tie the game on a (grooved) fastball from Craig Breslow to Billy Butler... the Butler did it (again), sending a mammoth drive nearly to the suites above right-centerfield for a 2-run HR and a 6-6 deadlock.   For his part, the aristocratically-monikered Teaford settled things down for the Blue Boys, managing to retire all 8 batters he faced as the A's bats took a little mid-game siesta -- luckily for Oakland the usually flammable Brian "Momma Didn't Raise No" Fuentes worked one of his rare 1-2-3 innings in the 8th to keep things equal. 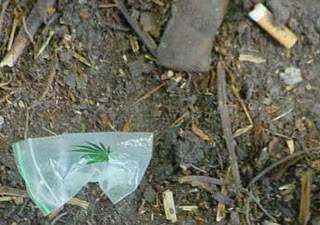 The bottom of the eighth -- rarely a cause for celebration -- proved to be disappointing.

The bottom of the eighth started promisingly enough, as Willingham was walked by the newly-inserted Greg "The Lowlands of" Holland and was pinch-run for by Michael "Songs for a" Taylor... MT was sacrificed to second on a bunt from DeJesus.  After an Allen K and an IBB to the ever-intimidating Ryan Sweeney, Suzuki tapped out feebly to squelch the threat and send this one to the 9th and to Andrew Bailey.  A 23,846-hop single through the infield by Salvador Perez (he was run for by Chris Getz) started things off distressingly, and it didn't get any better after a popout for the 1st out.  Alex "Commissioner" Gordon's double into the corner plated Getz for a 7-6 Royals lead --  making me wonder out loud just WTF is wrong with Bailey these days -- and Melky Cabrera's single (he took 2nd on a positively random throw home by the aforementioned Taylor, who since his callup seems to have been receiving some tutelage from Chris Carter as per his OF defense) scored Gordon and chased Bailey from the game.  Neil Wagner came in and allowed an RBI double to Hosmer and a 2-RBI backbreaker to Mike Moustakas to make it 11-6 before stopping the carnage, but the horses had already ridden far from the barn by then as far as the A's continuing their modest win streak... Joakim Soria struck out the side in the breeziest of 9ths for the save. 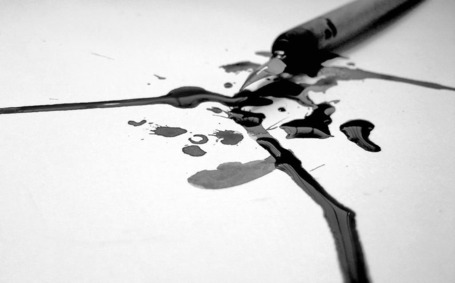 We're going to need a more effective 'pen, I think.

This was really waaayyyy too long a recap, because all you need to know about this game is that for the second straight day the Athletics' bullpen gave up 4 runs.  The Royals' 'pen, in contrast, did not allow a hit for the whole 2nd half of the contest, and that was that... oh well, at least it's over and it's not even 5pm.  We'll try again tomorrow night at 7pm as Gio Gonzalez opposes the amusingly-named Danny Duffy.  Join the somewhat more technologically-named Danny Merqury for all the action, and of course you should savor your holiday even if the mainstream US mass propaganda factory media wants you to believe that labor unions are the most evil thing since Karl Marx starred opposite his brothers Chico and Harpo in Duck Soup.