For the Love of Moneyball: The Failure of Sabermetrics In the Absence of Necessary Resources

Share All sharing options for: For the Love of Moneyball: The Failure of Sabermetrics In the Absence of Necessary Resources 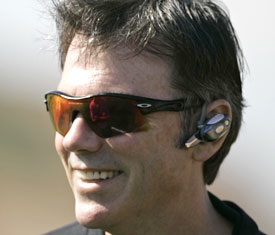 There’s guns across the river aimin’ at ya
Lawman on your trail, he’d like to catch ya
Bounty hunters, too, they’d like to get ya
Billy, they don’t like you to be so free 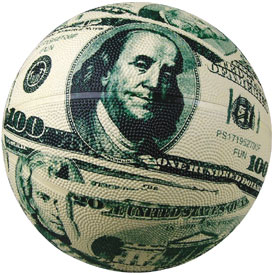 So here we are. Friday, the movie drops its snapshot of perhaps the greatest single achievement of our beloved Athletics franchise. World Series come and go; the hotter team usually can beat the better team and there's a champion every season unless it's 1994 and you're Bud Selig. So thank your lucky stars you aren't him -- or, despite his best efforts, the Montreal Expos -- and instead revel in the idea that what happened in late August and early September of 2002 will in all likelihood never happen again. I say The Streak is the A's single greatest accomplishment as a franchise chiefly due to its irreproducibility... too much can go wrong night to night for a team to be able to reel off 20 wins in a row in almost any sport. I'd not be at all surprised if no one does it again, ever. The only downside of it I can see is that the '02 club peaked too soon and lost steam before the overarching task of winning it all was achieved. 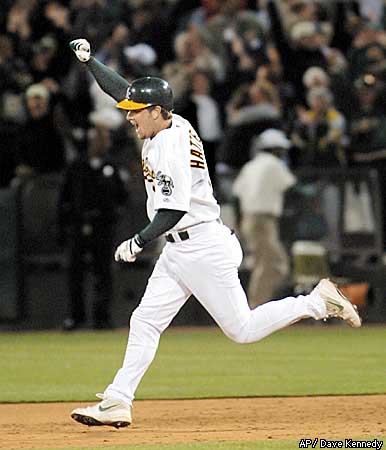 For me, this is where the worm started to turn: when the 2002 A's, instead of taking their place alongside the best teams of all time, became arguably one of the best teams of all time NOT to win it all. A club that should have had their own Hall of Fame display instead ended up in the same breath as the 2001 Seattle Mariners or the 1993 San Francisco Giants or the 1975 Boston Red Sox. That is, the grand roll call of the Coulda Beens and not the That Was the Year that Was list where it belonged. You could maybe trace the turning of the hourglass from that moment -- when Michael Lewis dotted the last i's and crossed the last t's of his chronicle of what was probably the quintessential Moneyball squad, the MVP GiambiJuice having left the winter before to force Billy B. to go all-in with The New Way of Doing Things that -- once the book gave all the secrets away to the richer teams -- never again really got as high as that magical late summer run for the ages that will, as I said, probably never be replicated in our lifetimes. 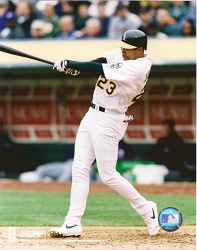 No Justice, no peace.

Of course there were other A's teams that immediately followed that one, and some were very, very good teams that had a very realistic shot at the title. 2003 and 2006 -- the latter with quintessential Moneyball reclamation project and prospective 1st-ballot HoF'er The Big Hurt, in his final star turn, leading the charge -- certainly spring to mind. There's no shame in saying that for the first half of the first decade of this century, the road to the MLB promised land -- and the championship trophy that is its greatest symbol -- ran directly through the concrete canyons of the crumbling edifice that sits like a lumbering prehistoric beast from another, less hospitable time near the intersection of Hegenberger Road and South Coliseum Way in Oakland, California. That for an AL team to grasp the ring, they had to beat us, and they damn well knew it. Those years were (just plain) crazy and they hold indelible and beautiful memories for all of us despite the failure of those A's to finish the job. 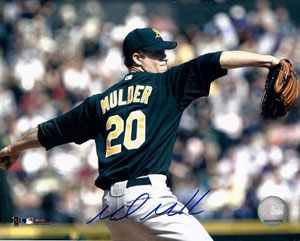 Now, make no mistake: this is in no way to indict or diminish the world-changing innovation and paradigm-expanding impact of the sabermetric philosophy or the widespread effect the advent of the new statistical models have had on the sport of baseball as we know it. We should all be extremely proud that we root for a franchise that has changed the fundamental landscape of the sport which it inhabits so many times in so many eras. When you hear me rant and rave about how the A's, considering the influence they have wielded (especially in their tenure in Oakland), ought to be a globally-recognized brand on par with the New York Yankees and Dallas Cowboys of the world, this is what I am on about. You could honestly make the case -- especially during the last 40 years -- that whether it be the length of their hair or the syringes in their travel cases or their complete Futureworld transformation of the statistical side of MLB, this franchise has had perhaps more real-world impact on the trajectory of the sport than even the Yankees have had in that same time frame. Yeah, ESPN, I said it. It's f*cking true too, despite the sycophantic and obsequious efforts of propaganda channels like yours to make the conversation all about the rich fools with all the jewels. 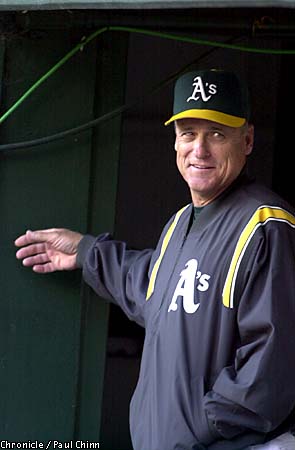 Have I showed you my Magic OPS Machine? It's right behind this curtain.

But we have to face facts: it's like anything else in life in that to succeed you have to be able to afford rent and food. What we have seen since the air left the sails in 2007 (never yet to return) shows us that spare parts and number charts don't a perennial contender make. You have to have the $$ to combine the best of the sabermetrical ability to uncover the hidden gems with the good old fashioned money-muscle to pay for the necessary Big Pieces any team needs to really compete on a consistent, no less elite, basis... especially since the Steroid Era the A's helped usher in ended and there are no more swollen-headed sluggers laying around to be claimed off waivers like some sort of Dial-a-Mutant-Masher service. A persuasive, if uncomfortable, argument can be made that in letting the sabercat out of the bag of tricks via the worldwide impact of the book -- now, years later, a Major Motion Picture -- the Athletics shot themselves in the foot and gave a great deal of ammunition to the wealthier clubs like the Red Sox to take the best of the Moneyball methods and marry them to their economically superior resources, thus producing an even wider gap between the haves and the have-nots and relegating our team to an even-more-irrelevant status than that which precipitated BB's impetus to begin to look under all the rocks for new ways of keeping up in the first place. It's been a quick and ugly slide for the Athletics from The Mighty Underdog to luxury-tax Welfare Queen. And although it isn't really Billy's fault -- after all, how many times can he be expected to reinvent a 150-year-old wheel? -- it's hard to look at the A's and not see a green-and-gold Rainbow Trout flopping around on the deck of expectations a franchise in its ultra-tenuous position cannot hope to meet without the necessary moolah to supplement the ability to take pitches until the opposing pitcher just goes, "You know what? Here's a flat fastball... now hit a three-run homer already so we can all go home." 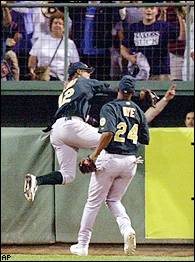 There's all sorts of other negatives you could argue, too. For instance, all you have to do is picture Daric Barton taking Ball Four and flipping his bat away to strut down to first base like he is Prince Fielder and he's just hit one 777 feet, and you get that in the last 5 years the Patience Approach so vital to the on-base-centricity of Moneyballin' has left the patient on the Critical list, supplying a product -- in what must always be primarily viewed as an Entertainment Industry -- that ranks just ahead of Watching Grass Grow to the power of Watching Cars Rust in terms of excitement and the overall energy any entertainment endeavor needs to draw interest and buzz to itself. We all laugh at the egotistical a-hole C.J. Wilson and his "Lawyerball" characterizations, but he isn't the only one who has accused the A's of "pimping the walk"... as if being able to lay off a pitch 1.5mm off the outside edge is the Alpha and Omega of baseball success, and not just one among many essential ingredients needed for a team to add up to more than the sum of its parts and not become the exercise in snoozeable mediocrity we have become accustomed to in the time since our last postseason foray. 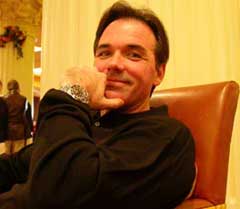 Campin' out all night on the veranda
Dealin' cards 'til dawn in the hacienda
Up to Boot Hill they'd like to send ya
Billy, don't you turn your back on me

I guess my point with this little screed is to provide the beginnings of an answer to the questions a lot of people a lot less familiar with the A's than us must be asking as the movie is released: that is, WTF happened? How did the Athletics get from jerry-rigged juggernaut to flatline FUBAR status in such a short time? Of course I can't fathom all the reasons for the precipitous decline and to be honest, I'm damn jazzed that this film has been made and stars one of Earth's most in-demand actors as our esteemed, if circumstance-hamstrung, GM. This causes me to acknowledge with my cursory attempt at analysis the turn for the worse that the A's have taken whilst still taking time to bask in the fact that, for a brief-but-memorable period in the not-too-distant past, our franchise was able to achieve something so unrepeatably awesome that the utterly unprecedented and unique story of how it happened has been enshrined in the annals of overall popular culture like it has with this film. Now, if we can just scam Optimist Prime onto the Extras section of the DVD to offer commentary detailing exactly how he got to be Brad Pitt's body double... 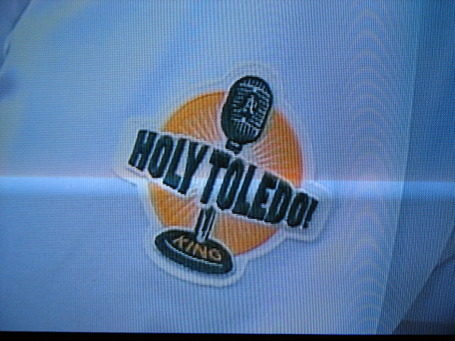 }
Well, how do you explain it?