Share All sharing options for: A's Taken Up In Ezequiel's Wheel; Tribe Wins 2-1 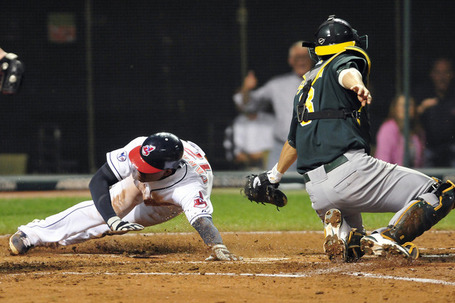 "...the wheels were lifted up over against them: for the spirit of the living creature was in the wheels."
--Ezekiel 1:21 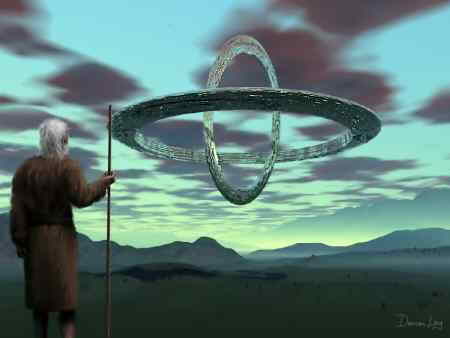 Short of a sensational Coco catch to end a minor threat in the 5th -- Ken K. said it was akin to "a wide receiver cradling an over-the-shoulder touchdown pass" -- this one was all starting pitching and an exercise in the uneventfully brisk pacewise, with Brandon McCarthy and David Huff (he was no gamble for Cleveland tonight) matching zeroes and doing so with an alarming alacrity... this, until each club made a bid to break the deadlock in the 6th. The A's had a chance in their half, with Matsui doubling and Willingham walking, thus setting up a two-on, two-out shot for Brandon Allen -- BA hit it hard, but right at 1B Matt LaPorta (does that sound like a pornstar's nom de outil to you? it always has to me)  to kill the rally.  Then, with 2 outs in the last of the frame, Ezequiel Carrera singled and up came Cubs transplant Kosuke Fukodome, who promptly pulled one down the line into the RF corner. Ezequiel, of course, wheeled around the bases like a fiery chariot and came all the way home to score on the double, staking the Tribe to a 1-0 lead. 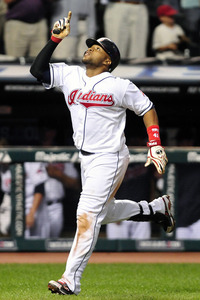 "This one's for you, David Brown!"

The Tribe doubled their vibe in the 7th on a solo from Carlos Santana that was almost as good for the Clevelanders as that one in "No One to Depend On" on Santana III... this made it 2-0 going to the eighth.  If not for the subsequent half-inning, "No Tengua Nadie" might have been appropriate to describe the anemic absentness of the Athletics' aggregate attack tonight.  Enter Scott "Not Grady" Sizemore, who led it off with a double and swiped third, plating the A's first run when Jemile Weeks foiled Tony Sipp's 9th pitch of his AB with a double of his own into the LF corner.  After my cousin Vinnie Pestano (I swear when Manny Acta made the change, he hollered HEY YO VINNIE!!!) replaced Sipp, Crisp failed on a (thoroughly dumbass, given the situation) sacrifice attempt (costly, Coco, costly) and Matsui sent Fukudome back to the barrier with a long drive, with Weeks taking third with two down.  This left it up to Willingham, who K'd watching a pitch he didn't think was a strike go by... Hammer displayed his displeasure to the plate umpire by flinging away his helmet as the crowd went wild.  Although he didn't get kicked out, he'll be complying with an Equipment Violation fine shortly. 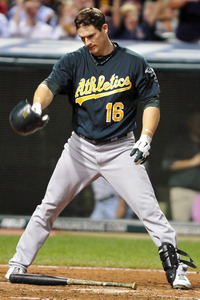 A slight case of trichinosis in the 8th and the A's were adequately cooked.

Anyway Chris Perez worked an easy ninth and that was that: 2-1 Tribe and a 3-4 record for Oaktown on this Eastern swing.  Of course, the main story for A's fans is that McCarthy was great again tonight -- tossing a 5-hit, career-high 10-strikeout gem -- yet his record does not reflect the Love: Seven and Seven Is, to be exact.  This was actually his third complete-game LOSS of the year, if you can believe that which I just typed. Well, we'll roll out the barrel once again tomorrow afternoon at 4 as noted Lego enthusiast Trevor takes the Cahill vs. the always formidable To Be Announced, so enjoy your evening and join Dan then for more threadliness... please also have a look at Don's colossal couch conference with A's legend Ray Fosse if you have not already done so.