Brandon McCarthy was brilliant. And with two (count 'em, two!) tape measure home runs, Brandon Allen just might be around for a little while.

McCarthy was simply masterful, throwing 7.2 innings against the best offense in baseball since 2007. He was shutting out the Yankees until his final pitch of the game, a three-run home run on a high unfortunately-placed fastball. All in all, he struck out 6 and walked 3, throwing 72% strikes. Yankees starter Bartolo Colon was less fortunate, as the A's hit him hard all day, tagging him for 5 runs (2 inherited). Aside from Allen's HR, he also allowed a solo HR to Eric Sogard, his first of his career. It certainly was a cheapie into the short right field porch, but hey, it's still a home run.

Speaking of Brandon Allen, I just can't put it into words. Click this. Enjoy. You might want to put down something soft to lay on, because it hit the third deck. He did it again in the eighth inning off of reliever Hector Noesi, but only reaching the second deck. For shame.

As 67MARQUEZ said in the game thread, "something that travels that far ought to have a damn stewardess on it". Brandon Allen, meet New York. New York, Brandon Allen.

The A's were cruising all day, until Nick Swisher's three run HR off of McCarthy to end Brandon's night. Balfour ended the inning, then the A's gave Andrew Bailey the mound for a three-run save opportunity. And then things got interesting.

Andrew Bailey had nothing. His location was nonexistent. Seemingly every fastball was high in the zone or out of it entirely, and because of that, batters had no reason to even worry about his breaking pitches. He got Mark Teixeira to pop out to make two outs, and then Robinson Cano stepped up to the plate.

After quickly being down 2-0, Bailey managed to crawl back to 2-2. Then another fastball so far outside that it was in the RH batter's box, bringing the game to a full count, two outs, bases loaded, the tying run on 2B. Bailey stood on the mound, delivered, and... 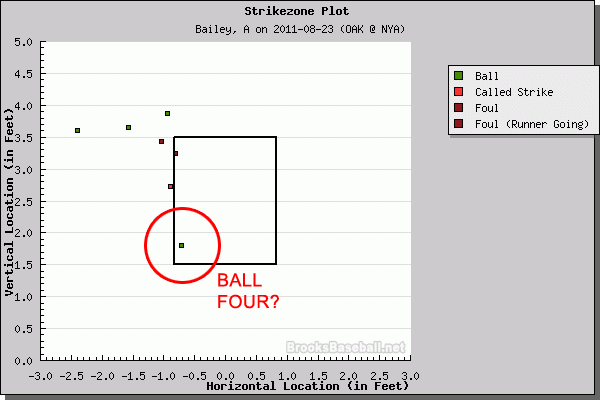 Ball four. Ball freaking four, on a pitch that, according to the rules of Major League Baseball, should have ended the game right then and there. According to PITCHf/x extraordinaire Mike Fast on Twitter after the game, "During 2010-2011, there were 1,283 pitches taken by a LHB within one inch of the 3-2 pitch to Cano. 74% of those were called strikes." Ouch.

Put it this way. According to Fangraphs, that walk resulted in a change of win expectancy of 29%. Thanks, Gary Cederstrom. Your WPA on that call alone was larger than 48 of the 50 players on the two rosters.

Bailey retired Nick Swisher on a heart attack-inducing warning track flyout to end the game, preserving the victory and the fantastic performances by Brandons McCarthy and Allen. The A's send Trevor Cahill to duel against CC Sabathia tomorrow at 4:05 PM PDT.