My A's Classroom by FanSince1980

Share All sharing options for: My A's Classroom by FanSince1980 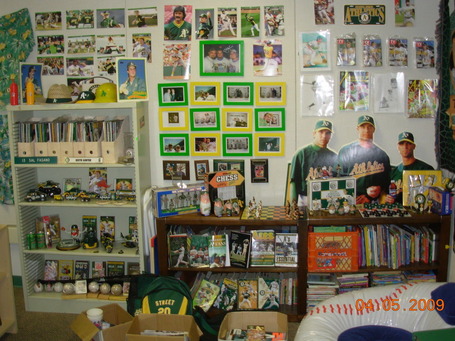 Hello and welcome to a travel Monday -- punctuated in these parts by a post pieced together by me and promoted by prearrangement with our pal John (FanSince1980 on here). This concerns a schoolroom in which I'd speculate we'd all happily serve detention... enjoy the off day and tune in tamari for A's-Yankees at 4pm.
-Josh/EN

I know it’s not Opening Day but in a season with not too many bright spots I thought this might bring some enjoyment to some fellow diehard A’s fans. Please keep in mind this does NOT stay up all year -- only about a week.

I became an A’s fan when I was 5 years old. In 1989 when Tony Phillips threw the ball to Eckersley to record the last out of the World Series I was 14 years old. I’ve seen great teams and bad teams but no matter what I’ve stayed a loyal fan.

In the spring of 2001 I was in my first year of teaching. Opening day was coming up and I decided to share my enthusiasm with my class of 3rd graders. At lunchtime I put up green and yellow streamers, covered their desks with green and yellow cups, plates, napkins, and tablecloths. Finally I put up a few of my A’s posters from my youth. My poor "Bash Brothers" poster has been hung up and taken down so many times over the last 23 years the edges are getting pretty torn up!

For the next 7 years I celebrated opening day the same way: I had a pizza party and decorated as much as I could for about 45 minutes. About 3 years ago a fellow teacher and fellow A’s fan challenged me to a "contest" to see who could decorate their classroom the most elaborate for Opening Day. She built a sort of mini-stadium in her room. I decided to bring 90% of my A’s memorabilia I have collected over the past 30 years. 5 hours into decorating I was still putting stuff up. I have a TON of stuff! Three years later I’m still decorating. Pictures never do it justice. I posted a video to YouTube (see above) but even that doesn’t do it justice. Every year I try to make it better, more complete. Each year I have only about 9 hours with some help but it never seems to be enough time. 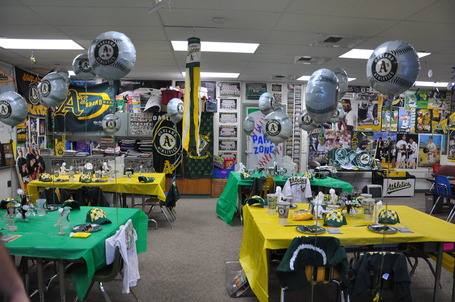 Next year I will have more additions. Feel free to post recommendations for next year. Go A’s!