Who Luvs Ya Baby? CoJack Delivers as A's Come Back to Conquer Rays, 7-5

Share All sharing options for: Who Luvs Ya Baby? CoJack Delivers as A's Come Back to Conquer Rays, 7-5

Update from baseballgirl: During the game, AN learned that a recent MRI on Daric Barton revealed a torn labrum in his right shoulder. We have had this confirmed by a source outside the A's organization. This could explain the unexplainable this season; this injury would have absolutely reduced Barton's power, would explain his discomfort at the plate, as well as his troubles with his throwing arm. The injury will likely require surgery and 4-8 months of recovery time. A second opinion is forthcoming. It will likely end his 2011 season, but could put him back with the A's by Spring Training of next year. 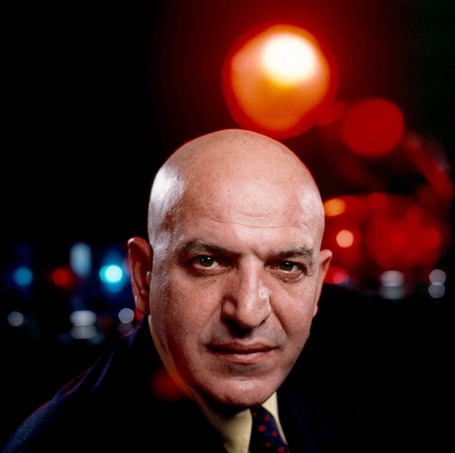 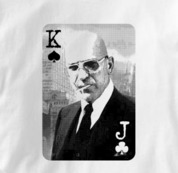 CoJack was no lollipop tonight, turning the Rays to suckers with a tremendous clutch knock.

The Athletics continued their second half offensive resurgence this evening with a fairly stirring come-from-behind win in a game they trailed 5-2 at the stretch.  Yeah, we may be in third place and the Angels and Texas look like tiny specks up in the distance, but you have to agree that since the break our lads have coalesced a bit -- especially with the sticks and the osmotic exchange that has to go on for a lineup to start to get hot together all at once -- into a pretty competitive bunch.  It might be a classic case of the Too Little, Too Late Blues but at least it will make for a less dreadful and boring-ass 2nd half of a season's worth of games to watch. 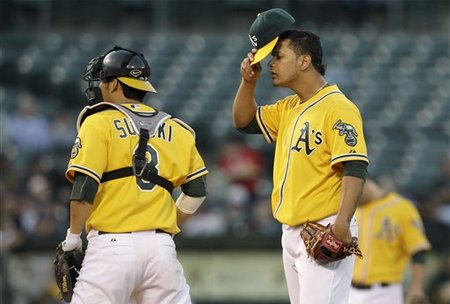 I think I smudged the cheat sheet under my hat here, Kurt.  You stall them while I check the one in my glove.

Early on Guillermo Moscoso (aka Ghee Chair Moe Moose Costco) struggled as his insane flyball ratio (he gets roughly as many ground balls a game as I do mystery checks for ten million dollars that just show up, made out to me, in the mail with no explanation) started to really catch up with him.  He was rocked for a first-inning blast by Ben Zobrist (a player I have always coveted... get 'er done Beane!!!) and a mammoth poke leading off the 6th off the bat of Kelly "drop 'til you" Shoppach... there were several other balls, including one that almost killed Coco Crisp leaping for it as it and Coco crashed off the CF wall (courtesy of Trade Rumor Extraordinaire B.J. Upton) that were just annihilated off the Moose tonight and he is looking like some adjustments are in order if he's not gonna be sent to Sac in favor of Josh Outman sometime soon here.  Add to it the usual quota of throwing errors (2 tonight) the A's are now famous for committing -- Ken Korach was so bold as to say that the defense is a chief feature the A's are gonna have to get better at next year if they are to be at all competitive -- and it was looking bleak as the crowd stood for the middle of the 7th. 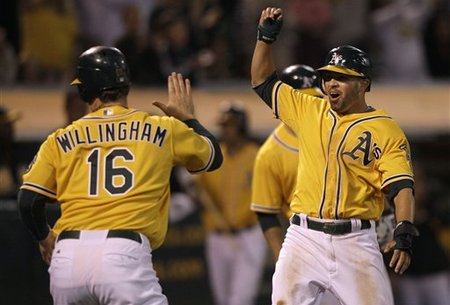 An enthusiastic DeJesus (redundant, I know) celebrates as Pork attempts Compliance without losing his right hand in the process.

The A's, whose two runs to this point had come on a HR by Cliff Pennington in the second, started their road back into this game by plating a run in the 6th on a sac fly by Scott Sizemore that brought in DDJ, who had gotten to second on his 13th double of 2011 and was moved to third with one down by a Conor Jackson groundout.  CoJack, as you can tell by the pictures I have selected to help tell this tale, would figure prominently as the game progressed and the Home Nine (in the sparkly gold alts tonight) took over. 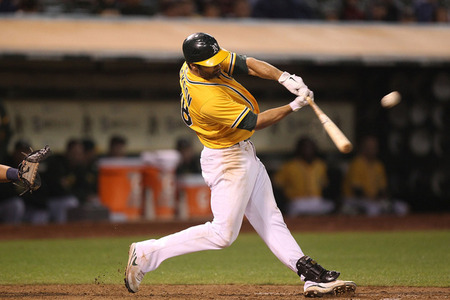 This ball was squared up rather sweetly, and might have departed the yard on a warm and sunny day in the 510.

The big rally came in the bottom of the 7th -- I issued an Imperial Proclamation that this take place by posting a special SupaMojoThread during "Take Me Out to the Ballgame" -- on an RBI hit from DeJesus (he seemed to be everywhere in this game's pivotal sequences) and a crowning blow to flip the score from 5-4 to 6-5 by the aforehinted CoJack, who monster-mashed a double to drive in Willingham and DDJ.  An add-on run in the 9th (Coco drove in Pennington with a double to left) and a somewhat trepidatious finish from Andrew Bailey (he walked Evan Longoria and allowed a double to the ever-toolsy Ben Zobrist -- get 'er done, Billy!!!! LOLOL -- before striking out Matt Joyce for the save) later and the A's had brought this one to the house in admirable fashion. 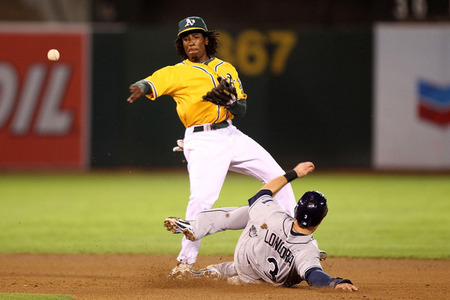 This throw -- which was angled more towards the road dugout than the 1st baseman -- was an example of the ill-advised defensive decision-making and execution that has GOT to improve if we are ever gonna see this team take off and really win something.

Great win, although you wonder where this thing'd be right about now if we had not seen the Bad News Bears on D and the cast of Day of the Dead on offense for the entire first half.  At least we aren't Seattle, who dropped #16 in a row tonight in the Bronx and whose fans must be outside Eric Wedge's office with torches demanding he shave the rest of his face off by now.  Anyway, the A's -- leading the AL in several salient offensive categories since the break (OK, take a minute to clean up the drink you just spit out) -- continue their 4-game dance with the Devil Rays tomorrow night at 7PM... join danny m. around then for threads aplenty and have a lovely evening, A's Nation!!!