It would appear as if chiweenie attendance at A's games is good luck! Saydie the Chiweenie was well behaved last night, despite my concerns. The general mood of the doggies was matched well by the A's on the field: calm and relaxed, despite the circumstances. Mt. Davis seats for most dogs, particularly those not the size of chiweenies, are not very comfortable. The aisles are too narrow to turn around in, there's no padding, and the hopes for a free sidewalk lunch are hindered by competition and the situation they find them selves stuck in. 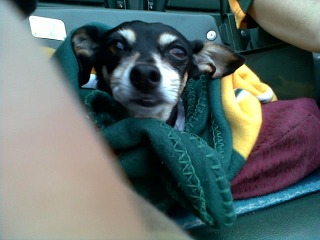 Despite being in the cellar in one of the worst (if not the worst) division in baseball, and with several of their opening day roster out, the A's managed to start the second half of the season in style, beating up old friend Danny Haren with impressive performances coming from myriad places: pitching from Brandon McCarthy (particularly the hold in the top of the fifth), Brad Ziegler, Grant Balfour and Andrew Bailey, hitting from Josh Willingham, Jemile Weeks, and Hideki Matsui, and defensive gems from both Coco Crisp and David DeJesus.

(special thanks to Susan Slusser for always providing all of us with the lineups via Twitter!))

It's Jered Weaver vs. Trevor Cahill to start and Ervin Santana vs. Rich Harden in the second game! Marathon!