AN Visit to Philly; Who's Coming to Los Angeles?

Share All sharing options for: AN Visit to Philly; Who's Coming to Los Angeles?

For those of you who have not yet joined Athletics Nation on a trip to see the A's in an away ballpark, this post is written to tell you all about our most recent trip, and to invite you to the next one.

This past weekend, AN flew across the country from Oakland, Los Angeles, New York, Penn Station, North Carolina and New Jersey to Philadelphia to see the A's play at Citizens Bank Ballpark.

I must start with a correction of a misconception; Philly fans were nothing but awesome to us. Beyond helpful, they peppered us with questions about baseball on the West Coast, and made sure to give suggestions about the best places to eat, things to see, and the history of baseball in Philly. They all know that the A's once belonged to their city; there is an entire historical society dedicated to the Philadelphia Athletics, including newspaper articles from when the A's moved. There is also a wall in the ballpark with the history of baseball. 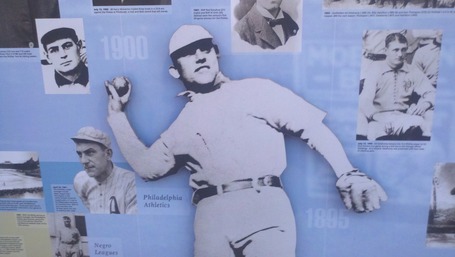 Scandalous stories, pictures, and an invitation to Anaheim after the jump.

Things got hopping early Saturday night, as we went out to dinner, donned our green and gold, and headed to the stadium. 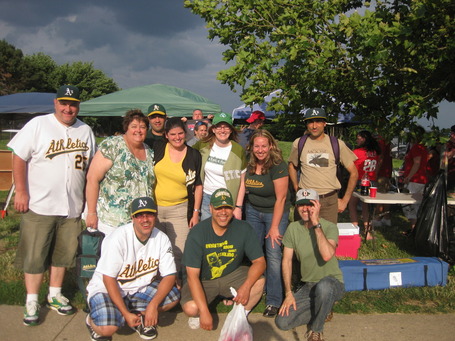 After watching an incredibly satisfying win as the A's beat Cole Hamels (in which we caught lightening in a bottle as the A's played like a real baseball team), we returned to the Holiday Inn bar to celebrate the victory.

The celebratory photo after the win: 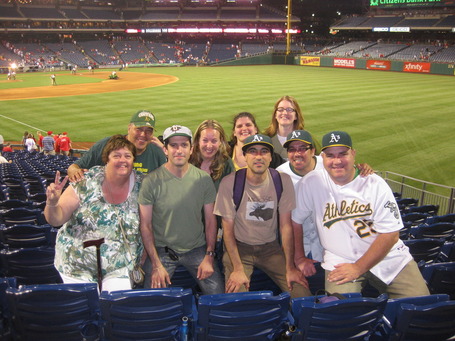 The night at the Inn will remain unpublished (you had to be there), but it was not an early night. On a side note, can you name the 2004 Oakland Athletics roster? And check out the view from our hotel room: 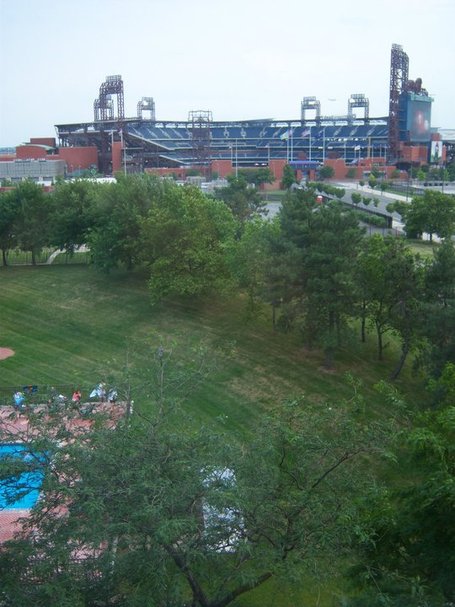 We may or may not have celebrated special occasions along the way: 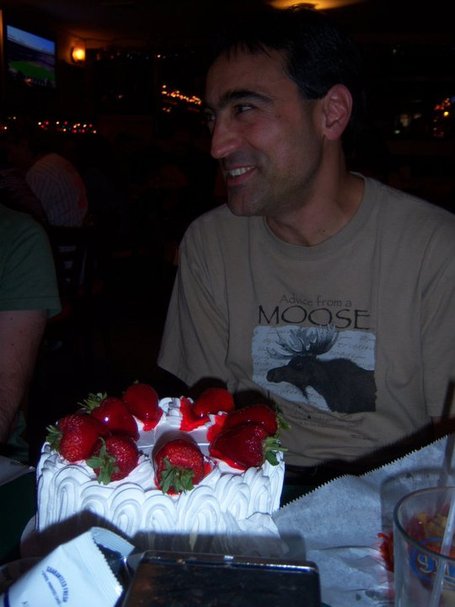 And we certainly didn't dress up other teams' mascots along the way: 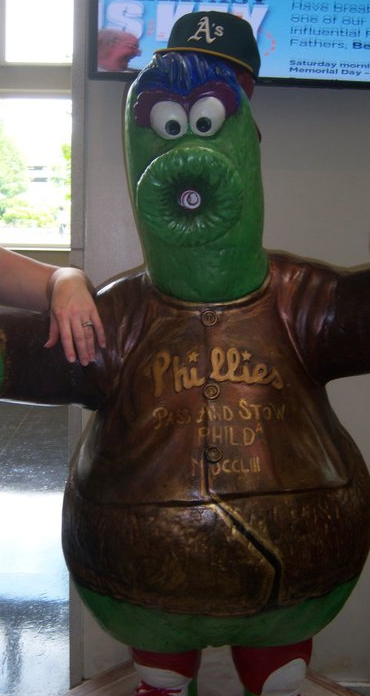 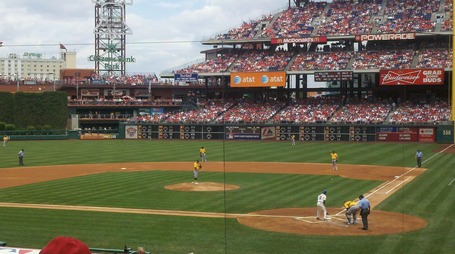 So, have I convinced you yet?

If so, this brings me to our next trip: Anaheim, CA. September 23-25. You have three months to plan.

Yes, you East Coast A's fans (one of whom owes me an email, by the way :-)), need to book right away, but you West Coast people, c'mon, it's like a 6 hour drive or an hour plane flight. Just come.

For those of you coming down from the Bay Area; fly to John Wayne/Orange County from Oakland; it's right next to the Airport, and we can arrange flight times to accommodate transportation.

Friday night's game is 7:05, Saturday's is at 6:05, and Sunday's is at 12:35. Saturday night will be our "So Cal AN Day" party; everyone who is local needs to put that date on your calendar. I have contacted the Angels for seats; they will be between $20-$30 a piece. If you want me to save a group ticket for you for any of the days, post in this thread and/or email me at baseballgirl1976 at hotmail with the number of tickets you will need and which days you will need them. Once I have enough interest, I'll open Paypal and email you with further instructions.

If you can't wait three months to see everyone, Oakland AN Day is coming up on Saturday, August 20th, and if you really want a double dose of A's baseball, come to the park on July 16th for the doubleheader you've always dreamed of.

As for next year's trips, the schedule is usually leaked by the end of the season, and made offical in November, but we have done a little less-than-scientific research. The A's have not played the Brewers in Milwaukee since they moved to the NL. In fact, the last time the A's/Brewers played a game was 2002 (in Oakland), and I'm sure someone has noticed. Since it is techinically the NL West's turn in the rotation, it is also a possibility the A's could be shipped off to Denver, which would be all kinds of a fun trip.

So if you are in need of a vacation, and want to make built-in travel friends, c'mon out to any or all of these events! Email me today about any interest in Los Angeles/Anaheim, and I'll put you on the email list.

A's play the Marlins again tonight as they try to win the series.