The Sad Misuse of Brian Fuentes

Share All sharing options for: The Sad Misuse of Brian Fuentes

Much like any reliever who throws from a low arm angle, Brian Fuentes has a rather large platoon split. He's much, much better against lefties than he is against righties. So can anybody figure out why Oakland has been misusing him since day one? See for yourself. 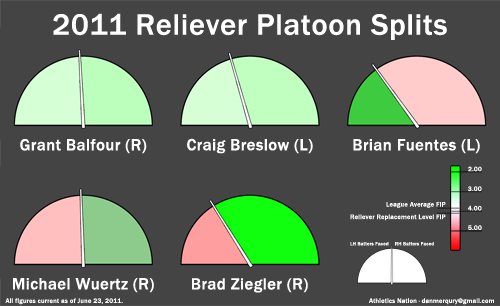 There's a lot of information here, but the part that sticks out the most, which simply blows me away, is that Brian Fuentes has pitched to a larger proportion of right-handed batters than any other reliever on the team. How in the world does that make any sense whatsoever?

I'm going to break down the graphic in parts.

This blows me away so much, that I have to say it again. Brian Fuentes has pitched to a larger proportion of right-handed batters than any other reliever on the team. He's terrible against righties. His FIP against right-handed batters is an abysmal 4.27, well below replacement level. The reason why he's a valuable asset is his performance against lefties, which is a fantastic 2.24.

Fuentes' role is even more baffling when you look at his teammate Brad Ziegler. He's an equal opposite—Fuentes is a sidearming lefty with huge platoon splits, and Ziegler is a submarining right-handed pitcher with huge platoon splits in the other direction. Brad is fantastic against righties and terrible against lefties. And to their credit, Oakland has gotten it right with Brad. Only 32% of his opposition this year is left-handed, and when you consider that around 30% of baseball is left-handed in addition to the roughly 15% that can switch-hit (that bats left-handed against a RHP like Ziegler), the average right-handed pitcher should face around 45% lefties. Brad Ziegler has only faced 32% lefties, which is exactly what a manager should do with a pitcher with such enormous platoon splits like Ziegler.

So why, oh why, has Fuentes faced even more righties than Brad Ziegler? Fuentes is the opposite of Brad. He should face more left-handed batters than any other pitcher on the team, not the least. And while I understand that it's not possible for Fuentes to only face 32% opposite-handed batters like with Ziegler (due to there being around 55% RH vs. 30% LH batters in the league), 70% opposite-handed batters is just embarrassing. Brian Fuentes hasn't suddenly gotten worse, and he not worthless. He's just been misused.