They were being coy with the media, but surprise! The A's packed their magic gold jerseys with them on the road, even though they were meant to only be used at home. And would you look at that—the A's rattled off yet another win, with a solid 7-3 victory over the Mets.

Josh Outman went six innings, allowing two runs (one earned) and striking out four, but the real star tonight was Jemile Weeks. He did it all, reaching base in 3 in 5 tries with two stolen bases, scoring every time he reached base. It was a fantastic performance from Weeks, and at this point, there's simply no way he can lose his job to soon-to-return Mark Ellis. It's been a long time since an Oakland position player has forced himself into the lineup with such impact like this, but Weeks has simply been terrific.

Jemile's only blemish was two bungled plays in the field that led to Josh Outman's unearned run. With one out, Angel Pagan hit a high flyball to shallow right field. Both RF Ryan Sweeney and 2B Jemile Weeks ran out to get it, and even though Sweeney was yelling "I got it, I got it!" all the way, they crashed into each other and let the ball drop, fortunately without injury. Two batters later, Jemile was again tasked with catching a shallow outfield fly, which clanked off of his glove as he tried to backhand it on the run. But if the occasional defensive miscue is the only bad thing he does in his very young rookie season, I'll take it happily. And speaking of defensive miscues, DH Hideki Matsui displayed a shocking lack of any, as he made his first start in the outfield in an Oakland uniform. He wasn't very quick, of course, but he flashed a nice glove, with a couple catches on the run and another nice catch right by the crowd in foul territory, to go along with getting on base three times.

In fact, the entire team reached base at a great clip, as Mets starter Dillon Gee was all over the place with his control. Home plate umpire Adrian Johnson didn't do him any favors, but the umpire can only get so much blame on a night where you only last four innings and walk six. New York's bullpen didn't fare much better, as the A's walked nine times all night. Take note, CJ Wilson. Lawyerball!

However they do it, though, the A's are winning, and they're winning big—six straight and counting. From AN commenter tanghamilton: 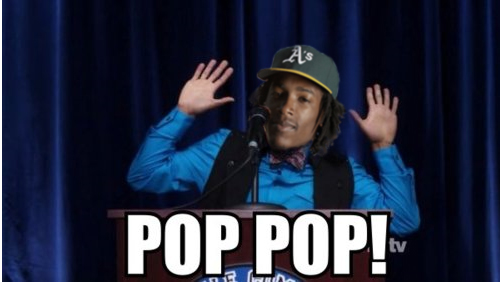