Rich Harden, who injured himself on the first day of spring training (I think from bending over to pick up his "disappointing career" ID card), threw his first live game in the first of what surely will be three or four rehab starts in Triple-A Sacramento ... and he was dominant.  He threw 3 INN, 0 H, 0 BB, throwing 30 of 42 pitches for strikes.

I was waiting for the "left the game with stiffness in his elbow/back/shoulder" but fortunately Harden was on  a pitch count and is going to let us believe for a while.

I never thought I'd say this, but the A's desperately need starting pitching.  They started the year with arguably one of the best pitching staffs in baseball, and in a matter of 3 weeks in which four starters hit the DL, they have, in my view,  one of the weakest starting staffs right now, certainly in the bottom 1/3 of baseball.  Not only that, Cahill and Gio have made it clear they are not the "real" big 3; they still get shelled by good hitting teams, and are nowhere near as consistent as the big 3 or any legitimate Ace.

Harden should be able to come back, barring any setbacks, in early July, which is around the All-star break.  The A's need a jolt in the rotation ... badly.

But Harden used to be the oft-injured-but-dominant-when-healthy type starter, but is he still?

One must really look at Harden's numbers last year to fully appreciate how far he's fallen (though he dominated the A's at the Coliseum; not impressive though).  In 92 INN, he gave up 62 BB (yikes!), 91 H,  5.57 ERA,  1.66 WHIP (double yikes!).  He averaged the most pitchers per inning of any starter last year.  He was, of course, battling injuries all year also.  First, he hurt his gluteal muscle (the butt), then he went down late with the more familiar shoulder tendinitis. 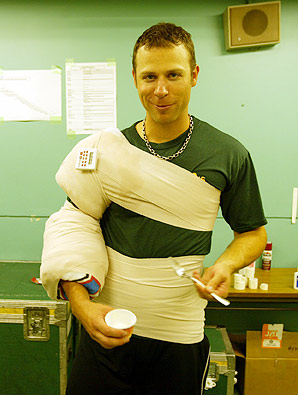 Does Harden still deserve the aforementioned label of dominant-when-healthy?  That Harden was mildly tolerable, but the Harden last year was flat out insufferable, and the Rangers felt the same.  They left him off the playoff roster and did him the favor of telling him to "go away forever.  And we'll still pay you.  That's how much we don't like you, Rich."

That being said, the A's are desperate, therefore, I am desperate, and despite fighting back the feelings, this short start by Harden has me a tad excited.  I will (sort of) accept six weeks of dominant Harden, and back to the DL again.  I cannot tolerate the not-major-league-quality starter we saw last year.

Which Harden are we going to see?

What are your expectation of Harden as a starter this year?