Moving the Middle Infielders Towards the Hole: Part Two

Share All sharing options for: Moving the Middle Infielders Towards the Hole: Part Two

So we now know that Trevor Cahill and Brett Anderson soaked up more groundballs through their fielding on the mound than any other pitcher in the majors last year. But that's not really enough to suggest moving the middle infielders away from the middle by a step. If you'll recall, Nico's theory says that because Cahill was able to field so many groundballs that would have otherwise gone up the middle, the middle infielders don't have to worry about fielding balls up the middle as much. But if I want to see if middle infielders are doing less work up the middle when Cahill and Anderson are on the mound, why not go straight to the source? Here's a spray chart of every non-bunted groundout that was hit against each Oakland starting pitcher in 2010. Click to enlarge. 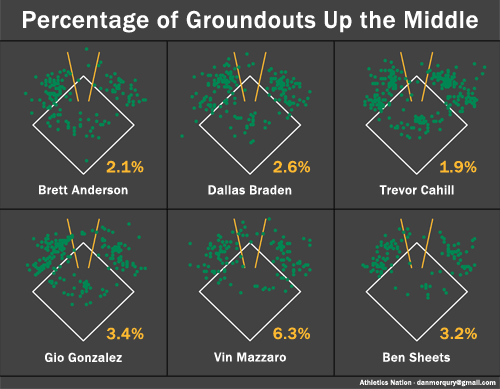 My methodology was simple. I just tallied up the number of groundouts hit up the middle, and compared it to the total number of groundouts induced. I defined "up the middle" as the zone drawn so that if you stood on the pitcher's mound, faced center field, and drew two lines in the dirt ten degrees from dead center on either side, the zone would be between the lines. This was an arbitrary decision, but the results don't change if I use a differently sized zone.

So what does it all mean? These figures seem to also support the hypothesis that Cahill and Anderson allow a lower quality of contact from batters than average. Take a look at the difference between Cahill's and Mazzaro's charts—they're like night and day. Cahill allows a ton of groundouts on the sides and near the mound, whereas Mazzaro's groundouts are all clustered deep, as if they were hit very hard. I know there has to be a more mathematically sound way of quantifying the difference in these charts than simply counting the groundouts up the middle, but really, these charts say enough graphically by themselves.

But back to infielder positioning. Forget about quality of contact, or any other tangents. The beauty of the spray chart analysis is that it doesn't matter why. Does it have to do with quality of contact or fielding ability or any number of other possible factors? Doesn't matter. All that matters is that it happens. And to answer Nico's question? Yes. Oakland's middle infielders did less work up the middle when Cahill and Anderson were on the mound than they did with the other pitchers. And if they're not doing very much work there, why have them there? Moving the second baseman and shortstop a step away from the middle should allow them to grab more balls that would normally shoot through the hole, and it could also have an additional effect on doubles by allowing the corner infielders to play closer to the line. Instead of positioning infielders so that a portion of their range is wasted, why not try to position them more efficiently?

Huge thanks to elcroata for the raw spray chart data.