It appears that with the A’s vs. Giants series underway, the stadium situation involving the teams are getting attention from an unlikely source: ESPN. Writer Howard Bryant wrote a great article summarizing the events that have led us to our current stadium situation, and it is a must read for all A’s (and Giants) fans out there. This, coming off the heels of Cohn’s "Interview" with Billy Beane, and the trailer for the new Moneyball Movie, and the A’s seem to be making a lot of press as of late. Couple that with the recent firing of Bob Geren and his replacement with Bobby v2, the demotion and dismissal of Kouzmanoff, the call ups of Weeks and Sizemore (and their subsequent awesomeness that has led to a three game winning streak), and there is a lot to talk about.

The stadium issue has become increasingly stale and tiring. We still have no word from Bud Selig on his decision about the A’s future situation, at a time when redevelopment agencies are hanging on by a hair. If redevelopment does go the way of the dinosaurs, it is likely that Oakland’s stadium hopes will be crushed. As it is, with the Oakland Redevelopment Agency’s recent purchase of the Henry J Kaiser Convention Center for $29 Million Dollars in order to provide budget relief for the city of Oakland, it is extremely realistic to ask if the city can even attempt to purchase the land at Victory Court, which was in question even before the ORA’s coffers had been plundered.

Remember that unlike San Jose’s situation, where a new city organization was founded in order to protect the land assets and funding necessary to complete the development of the Diridon site (Cisco Field or No), Oakland does not seem to have any backup plans for the purchase of the land at Victory Court or the relocation of the existing businesses. San Jose, on the other hand, has much of this already locked up, with most of the parcels already purchased, and the final lots ready to be acquired from AT&T. If the city or San Jose RDA cannot make the land purchase, the A’s are willing to buy or lease the land from them, something that will not happen in Oakland.

And we still have little news about the Victory Court EIR draft that’s still in the works.

Despite how much the Giants whine about how the A’s may kill them if they move south, I think the most telling graphic on how horrible the A’s situation in the Bay Area is right now is featured within the ESPN article. 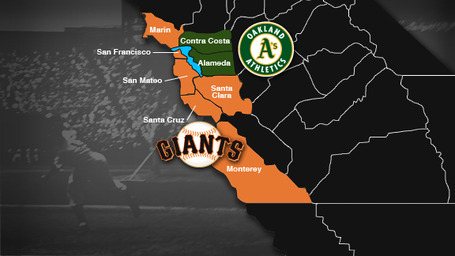 Take a look at that. The Giants control almost the entire Bay Area; in the only split two team market in the country. And the county in question was once a shared county that did not destroy the Giants livelihood when both teams controlled it before.

I think its time to re-arrange the blocks.

I think everyone really needs to get on board and ask Bud to stop the TeA’se.

Billy Beane was quoted in the interview with Cohn that the A’s, being 6 games out from the division, are still in it. The team, however, is still 9 games under .500, and that’s bad. So what should the A’s do? Blow it up or call in reinforcements?

I am towards something somewhat in the middle. Even though I believe that going half way in anything is the wrong way, the way that the A’s are situated right now, selling off their most valuable pieces will not bring much in the way of value. The A’s currently have few appealing trading chips that would fetch anything of interest that they are willing to give up (Willingham, DeJesus, Crisp), and those assets have not performed well enough that teams would give up prized prospects for them.

On the other hand, the A’s also have a lot of dead weight on the team that, if cut loose and replaced with prospects from the minors could provide a performance gain, bring back some low-level prospects, some salary relief, and allow the A’s (and fans) to watch the franchise’s future play at the same time.

The A’s injury situation might be righting itself soon as well (Willingham’s injury last night not withstanding). McCarthy, Ross and Harden (yes, I know, I know), may be back soon, and Mark Ellis is going on a rehab assignment, though if he still has a job on the team is in serious doubt.

If the pitching can come back, and the non-performers replaced with up and comers, the A’s chances might improve. Should we demote Barton and call up Carter to play 1B? Move Willingham to DH and call up Taylor to play the OF? If Willingham is injured, should we call up Taylor anyways? Cardenas? Should we call up Sogard and see if a three way battle with Rosales and Pennington will lead to any results before Grant Green is ready for the majors?

What would you do with this team?