UPDATE, 6:30PM 6/13/11: Chris Townsend very sincerely apologizes for the inability to cover this today, due to circumstances beyond his immediate control.  Instead he will have me on at 3:15PM Tuesday 6/14 (is it Flag Day? Already??!?) to do a short segment about the PleA'se Stop the TeA'se initiative and to direct everyone to Bryan's fantastic and essential Facebook page dedicated to what is afoot.  Anyway, tune in tomorrow as I will be CT's first guest on his drive-time program that airs 3-6PM on 95.7FM, and KEEP EMAILING BUD SELIG... let's fill up his box at allan.selig@mlb.com.

We''ll be tailgating out in Lot A tomorrow afternoon so come on out and party with us!!! And get out to the game, even if you can't come chill!  Danbot has your homestand-opening game thread at just before 7PM. 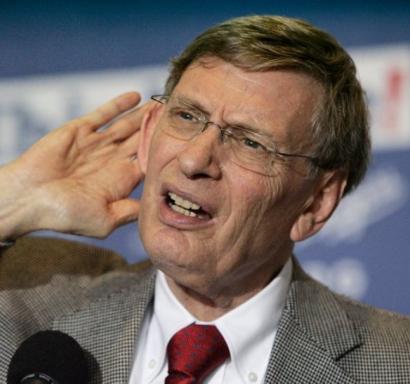 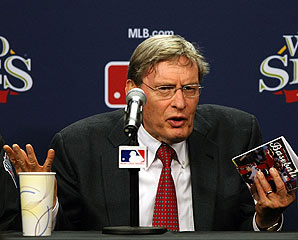 Today is simple: I come bearing a mission with which we can all get onboard.  You love this franchise.  You come here every day, seeking news that somehow, someway the Athletics' brand will emerge from the uncertainty.  The haze. The cloud of doubt that hangs over this franchise like the proverbial Sword of Damocles and seems to lend a dark background tone to whatever goes on from the field to the front office.  You want to blame Beane.  Or you want to blame Wolff.  Or Fisher.  Or Jean Quan, or Chuck Reed, or Willie Mays, or the Queen of England.  But it's not them.  At the end of the day, we all want the same thing: for the A's to come unstuck from their stadium predicament and begin to look forward to inhabiting a brand new, state-of-the-state-of-the-art facility that will give them a basis to rehabilitate their brand back to where we know it belongs. To the heights of excellence it has known in a storied past too easy to forget about amid the current torpor, and even higher than that.  Where we all -- no matter who we are or what our disposition to the ongoing situation is -- want the A's to be. To the Toppermost. 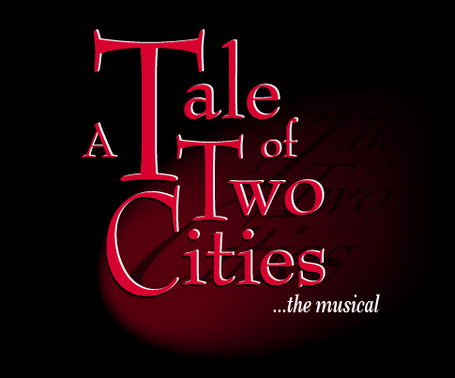 It's not about Oakland vs. San Jose anymore.  It's about demanding that the leadership of MLB actually lead.

Important point: this is in no way intended as a renewal of the utterly counterproductive territorial pissing match between the East and the South Bay; if we go down the all-too-facile road of internecine conflict, paved as it is with division for the sake of division, we will all lose.  This is the Bay Area and if we live here we all live here together, from Belmont to Berkeley.  If we want to accomplish the goal by which the A's Stay in the Bay, we must make ourselves let go of the dichotomies and act in unity... all of us as A's fans that truly want the best for our franchise.  In the final analysis, this is something that everyone wants, from Crazylegs the Kettle Korn King to Billy Beane to Lew Wolff to Kara Tsuboi and her pal Stomper to Susan Slusser to Vince Cotroneo to Banjo Man and back again to all of us.  Even Bud Selig, in the sense that he'd truly love to get this burr out of his saddle and this mess off his plate, wants this.  We just have to set the dominoes into falling exactly right so enough microphones get in his face, each attached to a reporter asking the same question: why are you disrespecting one of the cornerstone franchises of MLB, the enterprise to which you have sworn your stewardship and attention?  This has gone on too long with too much of a tone and timbre of outright neglect, and short of Connie Mack or Charlie O. rising from the grave to give Bud a wake-up call, it is up to us and us alone to light this particular fire under this particularly remiss Commissioner... lest our "Bando Gypsies" wander in the desert forever.

There is a direct relationship between the TeA'se we have seen on the field and the Commissioner's Big TeA'se that has gone on around this issue for well over two years now.

Make no mistake: these times when the A's get close on the field late in games but fail to get over the hump and end up with the short end of the stick finds a definitive parallel in the way Bud Selig has allowed this stadium decision to hang in the air, tantalizing us with prospects of a new era for the Athletics that never quite comes.  It's as if we are in Purgatory, hung out to dry by the powerful forces that are supposed to be shepherding this standoff to a beneficial and reasonable conclusion.  Each time the team falls short between the white lines, we can't help but think of how things would be -- of what the energy would be, of what players we might be able to afford and entice at the advent of a new facility, or even with the promise of a new stadium solidified into some sort of yes-or-no gesture that lets us know where we stand -- if this issue were to finally come to some sort of decision on the part of the Commissioner.  What I am saying is that to move this towards the necessary resolution (whatever it may be), a Revolution is required where all A's fans come together no matter who they are or what future A's home they may nominally favor and take a stand for what they love. 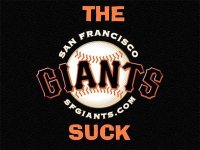 We can blame Larry Baer and Bill Neukom until our heads explode, but as bad as they are that doesn't move the ball one inch.

Yes, the Giants are holding it all up, I get that.  Yes, Oakland's "Victory Court" Environmental Impact Report (EIR) is proceeding at a speed somewhere between that of a glacier and Bengie Molina running out a triple, I get that too.  Yes, in Bud's mind his hands are tied, so he has gone into a sort of administrative fetal position on this matter, all curled up with his thumb is his mouth -- or some other convenient orifice of choice.  Be all that as it may, there's no cavalry coming to shake him back to sentience and make him bring leadership to a difficult and distasteful set of circumstances.  I hate to say it to you, but the A's fanbase -- the group of people who form the natural constituency of concern here -- has been whittled down pretty significantly.  So if you're looking through your binoculars to see if the cavalry is approaching to save the day -- or at least to start some shit so the real players in the drama can feel the heat and act accordingly -- I'd suggest you lay the spyglass down and refer to your nearest mirror.  Because that's where the cavalry is gonna come from, if it's to make the scene at all in time to keep this franchise from circling the Eternal Drain of Irrelevance and Depredation.

Don't be deterred and do NOT lose hope.  As futile as this may appear on the surface, our cause could not be more just and we have many platforms to make our voices heard.

So today is simple: today, our campaign to bring accountability to this insane and seemingly irresolvable situation begins in earnest.  Please tune into 95.7FM today from 3-6PM, where our friend Chris Townsend will inaugurate the initiative of which I speak and start to coalesce the troops around some marching instructions for the fanbase to engage with.  I will come on, as will Bryan, to unveil the launch of our new Facebook page we have busted out to get the ball rolling and to provide a nucleus around which we electrons can all orbit in the days and weeks to come, as we set about trying to move this very heavy and heretofore intractable boulder from in front of the A's cave.  We humbly request that you walk with us in unity and purpose (please start by "liking" our new FB page, linked above) because we all are aware that this will take an unprecedented degree of targeted messaging to get across to the person -- himself no less than the Commissioner of the oldest professional sports league in the United States -- whom we are trying to reach with our plea. 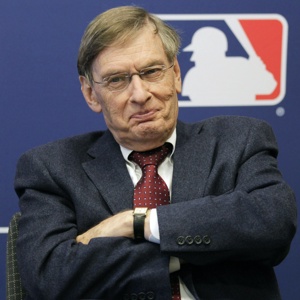 It might seem like one more windmill at which to tilt, but then none of us remotely imagined that Billy Beane would go ahead on and can his friend Best Man Bob mid-season either. The truth is that when it comes to positive change, People Have the Power, and be it ever thus.  We bring you this initiative in the unified spirit of deathless, eternal love for the Athletics and of revulsion and disgust with how this Commissioner has allowed the A's conundrum to spiral onto his permanent back-burner of arrogant abrogation and avoidance.  We come to turn up the heat on his stovetop so things can be brought to a boil and the banquet that a new ballpark will represent for us all can, at long last, be served.

Of all the forces that ruin human endeavor, there is but one that remains the most common -- and therefore the most powerful.

The overarching fact of this whole deal is that one man has the power to bring the opposing forces involved here together to approach some sort of endgame for it, whatever that may be.  Up to this time, he has been content to let it ride ad infinitum because no one has insisted he do any differently.  We come to you today to ask you to set aside your nominal differences and your petty divisions as fans and embrace with us this program of building a movement to get Commissioner Selig to make a decision.  We know that in the coming months the release of the Moneyball movie will bring a degree of additional attention to what's been going on and we want to get on that wave early so we can surf it to a brighter, less rocky shore for everyone concerned.  We also feel that as complex as all this is, the simple core of it is that Bud and Bud alone has the power to make it come unstuck, by whatever means he has at his disposal to do so in his role as head of MLB.  We are looking for him to exercise his office and do his job, and to do whatever it is going to take to show leadership in these circumstances so the A's can emerge out of their current wilderness -- itself a result in no small way of this pattern of neglect and diffidence -- as a product, as a team, and as a proud and historic franchise. 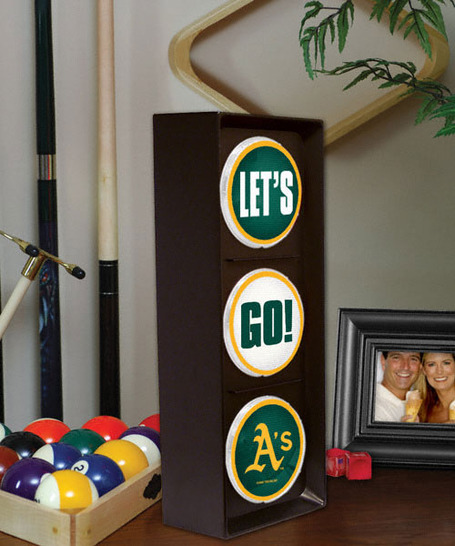 Let's roll the dice on this... if we don't get involved this thing will go on forever and that just doesn't do Justice to what we know the A's have been, what they are, and what we all know they can be.

Thanks so much friends!