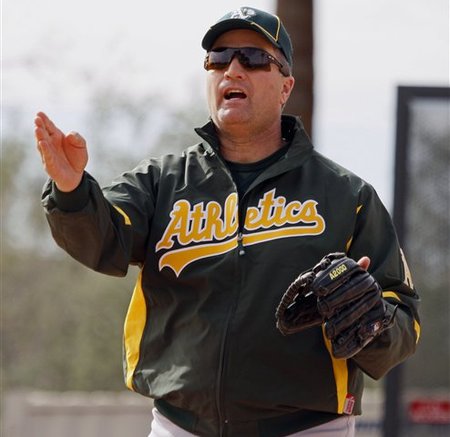 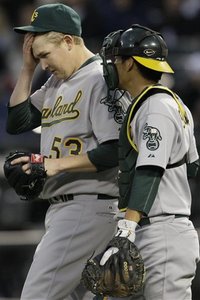 "I dunno, Zuk. I've been wracking my brain night after night, trying to decide whether I prefer the elegance of the road grays, or the more modern, colorful look of the green tops. I'm stumped."

It's out there, somewhere. I know you're skeptical, as well you should be. I mean, we are A's fans. We HAVE to take it will more than a grain or ten of salt when someone tries to tell us there's this mythical land out there.... this utopia called Two Games Over that we are what? Supposed to take it all on faith that there's this amazing place but we've never so much as seen it? I admit it, I want to believe. Passionately, I do. Each time we climb to a game over I think about it... is this the time we get to see The Promised Land? Where the A's break their Idling Beacon that goes "On-Off-On-Off-On-Off" with a win and loss alternating to infinity? 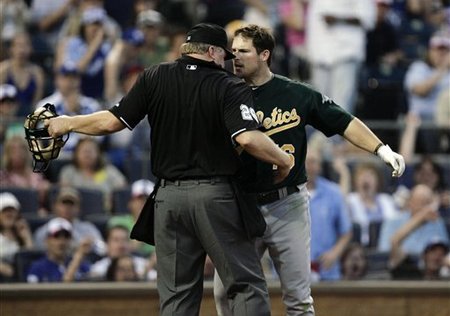 Josh Willingham explains to the home plate umpire the reason contact lenses come in pairs. He has been suspended one game but is appealing, so he's in there tonight.

It feels like last season the team trended to a game under .500 but this year it is -- so far, a month + in -- trending somehow to a game over .500. Which I can't say isn't an improvement... but it makes me (T?) long for more. For I am old. I remember the halcyon days of 2006 and before, all the way back to the ancient Moneyball Epoch that went before. When OPS stalked the land and was mighty, and VORP was The Word. These days I don't ask for much; just walking over to the turntable that's been skipping for a while at the part of the song that goes "kick 'em when they're up, kick 'em when they're down" and moving the needle to the next track would be plenty for me. I'd honestly like to hear the song that goes "I've paid my dues, time after time..." but I know we need small steps to get that one to play so I'm shooting for Two Games Over today, which as we know is the first day of the rest of the season. 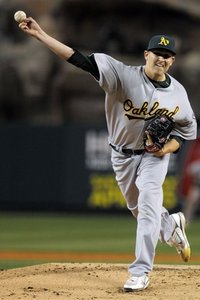 So that sets it up: the first of three with Texas, with whom we sit tied for 2nd place here, 2 games behind the Angels. Trevor Cahill takes his (utterly sick) numbers (5-0, 1.79, 1.12 WHIP plus a vastly improved K-rate vs. right handed hitters) to the bump to face C.J. Wilson, 4-1 with a pretty nifty 2.92 himself. To have a winning road trip means we gotta take this series and get serious about separating from the .500 loop, I mean that. 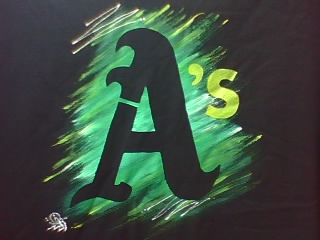