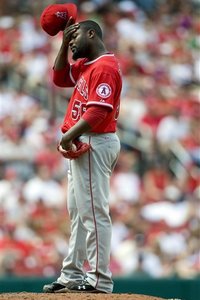 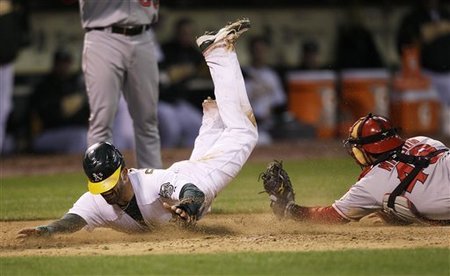 Reach out! I'll be there!

Well, the A's must love a rainy night, because tonight they pulled a pretty big rabbit out of their collective hats, all after an hour-and-a-half rain delay that left about 56 people in the Coliseum stands.  I won't get too into the details of how this game got to extra innings, because it seems like it all happened 3 days ago and honestly I've been at this since about 5 o'clock today and it's all starting to run together in my head.  Both starters threw well, with Anderson showing good velocity (94 on the gun) and inducing tons of harmless grounders.  Pineiro was dealing but in the fifth the A's broke through thanks to a collapso by Alberto Callaspo, who threw a Mark Ellis grounder into the RF bullpen to get the A's on the board as David DeJesus -- who had been HBP on the thigh -- raced around to score.  A Cliff Pennington RBI single and a Josh Willingham sac fly to deep center got the A's out front 3-0, and you thought that might be enough. I remember when Willingham hit his ball, though, thinking "on a sunny day that's waaaaay outta there" and "that would have got us the 'famous five' we seem to need to win games." Prophetic voices in my head, these proved to be. 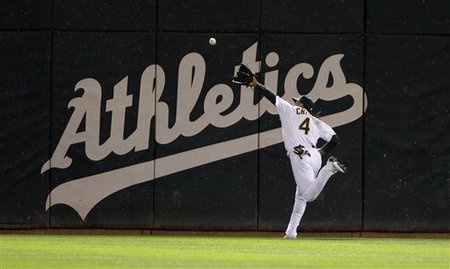 On a cold night like this, you need some hot Coco to get you through.

The Angels would get to Anderson in the top of the 6th and then squeak ahead in the 7th.  In the 6th it was 2 runs scoring on outs, the second of which was a sure 2-run double that only a jawdropper of a running Coco catch in the left-centerfield gap made just a sacrifice fly for Mark Trumbo.  The 7th was truly a trip on the Crazy Train, as Howie Kendrick (and the umpires, who when they weren't calling pitches right down the middle balls, were letting this game trudge on in some pretty nasty weather) got to a shaky-for-the-first-time-this-year Michael Wuertz with a 2-run single to put the Halos ahead.  Only the stellar work of the A's bullpen kept this game on the gettable list, with Ziggy, Fuentes and Balfour (who struck out the side in the tenth) working scoreless frames late to keep things close.

Fast forward to the 9th, where the A's were staring at falling below the .500 mark with 2 down and no one on.  Crisp battled the flamethrowing Slegghead closer Jordan Walden (who tickled 99 on the gun) before lofting a soft bloop single down the LF line to get aboard; a few pitches later he was standing on 2nd with the clutch, Dave-Roberts-2004-ALCS style steal to get into scoring position.  This set it up for Daric Barton to stroke an even-more-clutch, 2-strike single into right-center, plating Coco and knotting things up at the 11th hour (literally, it was almost 11pm by this point).  After Balfour's whifftastic 10th, the A's went to work on Angels veteran Fernando Rodney in the bottom half.

Waterloo - I was defeated, you won the war
Waterloo - promise to love you for ever more
Waterloo - couldn’t escape if I wanted to
Waterloo - knowing my fate is to be with you

After Hideki Matsui swung at ball four from Rodney on a 3-2 pitch for the first out, the A's starting taking pitches.  Rodney's palmball was all the F over the place in the misty/rainy weather, and he walked Zuk and CoJack before promptly wild-pitching them to second-and-third, with the errant pitch coming on a high check-swing by Ellis where -- let's be honest -- the call could have went either way.  Mike Scioscia -- by now wearing the Sad Sosh Face we know and love to see -- brought in Howie Kendrick from the outfield for a 5-infielder formation, and Ellis's nubber immediately found him.  His high throw meant that Bobby Wilson was late with the tag on Zuk's headfirst slide and that was that. Game Over, and the A's sneak away with what might be the win of the year so far in terms of perseverance and flat-out refusal to be denied the "W."

It had to go down this way, I guess... those 5 runs really do seem to be a prerequisite for an Athletics win, don't they?  If these "Take Five" A's can just eke out a set of quintuplets a night, we could and should be good to go in the (fairly there-for-the-taking) AL West and good to go to the postseason, if all goes well. But for now, the task at hand: the A's go for the short sweep later today, as Gio Gonzalez goes against Tyler Chatwood in a game that may have some of the same weather issues that this one did, if the forecasts are to be believed.  Join danmerqury at 7pm for another 42,873 game threads and let's get our first sweep of a series of 2011! 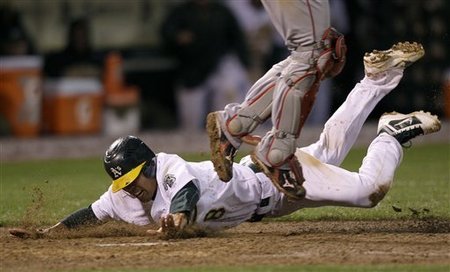