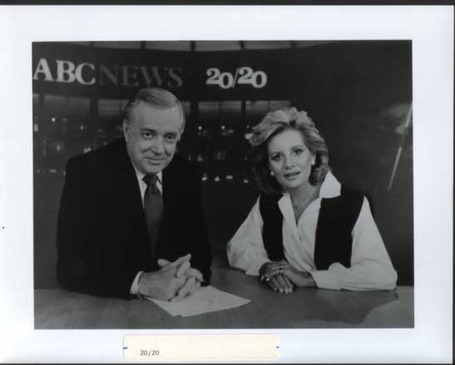 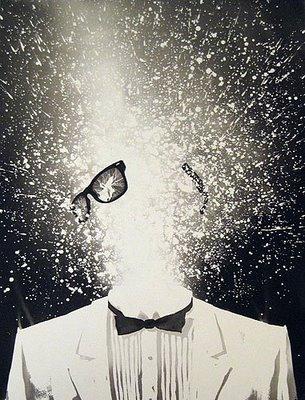 Yes, don't act so surprised... you have lived to see an EN post that contains some semblance -- however rudimentary -- of mathematical analysis.  And with an equation in the title and everything.

It boils down to this: we are a crystal-visioned 20-20 here at the quarter pole, and this is in no way headline news.  In fact, this club has been at .500 45 times (33 in 2010, 12 so far in 2011) in the last (162+40=) 202 games. The tractor beam of mediocrity has an ennui-inducing pull all its own, with myriad reasons for its mighty suckforce, but one thing seems to stand out.  Basically it's very simple: if the A's find some sort of way to score more than 4 runs in a game, they are extremely likely to win. If they accrue less than 5, well, that's a day we are all even more likely to wear a frown, because they almost certainly went down to defeat.  I've been perceiving this as true for pretty much the whole last season-plus and a cursory examination of the results spanning that time -- even by someone with the statistical acuity of a post-lobotomized Literature major such as I -- yields a pretty fair substantiation of this idea. 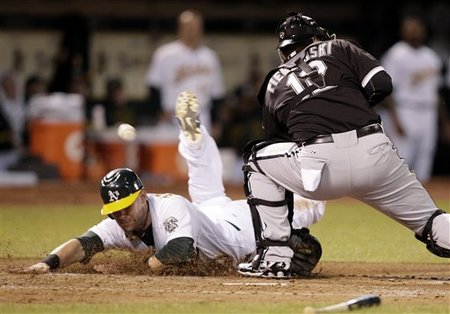 Like they always say when a team gets shut out, this ain't golf.  You can't win if you don't score.

We can argue the specifics of how it all happens, but let's face it: the central factor in the determination of the outcome of any game is how many runs your team scored.  If you look on the board and your final total is a big ol' crooked number, you like your chances of your side having won the game even before you see the other team's tally.  Especially with (arguably) the best pitching in the majors, and (undeniably) the best young pitching around.  But even with Gio, Cahill and Anderson (and Dallas Braden and Tyson Ross, for that matter), you can't be Waitin' for a Superman.  Because you just can't win if you don't score: they can keep you perennially in position to win, but if you don't give 'em at least a trickle of run support there's only so much they can do and so many consecutive zeroes or near-zeroes they can toss up there.  Sometimes I watch the approaches of Kouzmanoff and (I hate to say this because his defense is still utterly flawless) Ellis and I think we'd do just as well to send the pitchers up in their places, but the reality is the pitchers don't hit in the AL and if you wanna win you gotta score... and to do that it means your hitters gotta hit.  The short version is that the A's are 33-92 in games in 2010-11 where they've scored less than 5 runs, and a staggering 68-9 when they've scored more than 4. 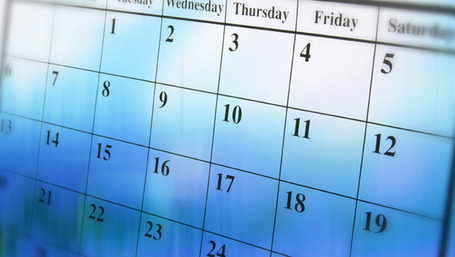 Stratford-upon-Oakland: For 202 games and counting, the A's have been Much Ado About Nothing, drifting back and forth in the vicinity of .500 in their petty pace from day to day, in search of a Midsummer Night's Dream. And don't get me started on finding a Hamlet with some cash to build a stadium, because Selig is gonna wait until the Twelfth Night to decide that toil-and-trouble.

The somewhat longer version this adds up to is also pretty striking. It amounts to the reality that of the last (81+20=) 101 losses, the A's have failed to score 5 runs a total of 92 times, or 91.1% of those defeats.  When we score below the "5" marker, we pretty much always end up with the salty end of the salami: in 74 of 81 losses in 2010 -- 91.3% -- we scored less than the five and lost; in 2011, that is essentially the same at 90%, or 18 out of 20. That's right... the A's have lost a grand total of (7+2=) 9 (yes, NINE) games in the last season and a quarter  in which they've scored more than 4 runs. These facts keep putting this maddeningly f*cked up thoughtbug in my head that if this Level 7 meltdown of an offense ever managed to score (cue Ken Korach's voice calling a close pitch) juuuuuuusssst enough runs so that this team -- as John Prine and Iris Dement might sing, "In Spite of Ourselves" -- might manage to stumble into the short-series'd postseason, where runs are evermore scarce.... well, then we'd have opposing hitters weeping helplessly into their pillows on many a chilly October night, now wouldn't we? At that point, the likelihood of parade weather would be high, perhaps hovering like tantalizing ticker-tape somewhere between The Music Man and Ferris Bueller's Day Off, I'd say -- although I won't hold my breath on that kind of thing as long as Best Man Bob is at the helm and managing our bullpen like he's not sure he'll have a job in September unless he wins in May.

The A's feel the squeeze, In Quintessence

So it's all about that number 5 and getting there or not, it really does seem.  The rest of these very basic numbers play out like this: in 2010 when the A's scored more than 4 runs, they won 55 times, good for 67.9% of their total wins. In 2011, that number is holding basically steady at 65%, or 13 of 20 wins -- yielding, incidentally, a composite of 68 of 101 or 67.3%.  This means the A's are winning a couple more of the low-scoring games this year; in 7 of their 20 wins this year (35%) they have scored less than 5 runs, as opposed to last year's 32.1% (26 of 81).  OK, well I guess it really is true then: the pitching really is that much more lights-out than even 2010 was, what can I say?  Fact is, the A's have scored less than 5 runs in 61.9% of their games (125 out of 202) since the start of 2010 and have still somehow broken dead even overall, pretty much on the backs of the pitchers.  I know it's a small sample size so far, but taken together with the previous season all this just reinforces the obvious need for somebody to go get Gio, for instance, a contract and a functioning ballpoint pen immediately.  A couple more 7-inning, 1-run showings from Ross and I'm ready to do the same with him, unless we can, as part of a trade, turn him into Albert Pujols or something. 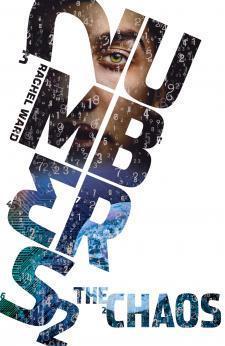 All righty, enough of my pathetic use of facile, surface-scratching statistics to make a sad attempt at an out-of-character, mathematically-driven post... you don't need me to tell you that unless we score some godforsaken runs, we aren't winning more than half our games, period.  The next game is at 7pm tonight vs. the Slegtastic Orange County Nephilim of Halotown, with Brett Anderson opposing Joel Piñeiro.  The rain has moved in as of now (4 AM Monday morn) and the forecast is that it isn't gonna quit for a couple of days possibly, so I'll keep you posted with news of any delays or cancellations.  Perhaps the A's can fall behind 17-0 this time before it's all washed away... anything to make Mike Scioscia make the Cryin' Blue Rain face he sometimes makes.

"Don't cry for me, Alta Vistaaaaaaaa..."