How Bad Are First Pitch Strikes?

Share All sharing options for: How Bad Are First Pitch Strikes?

The A's new offense didn't exactly start out as hot as some had hoped, and afterwards, people were naturally looking for things and people to blame. But one comment in a thread last week caught my eye.

I have it stuck in my head (especially after last night) that the weakness in the offense isn’t the talent or the ballpark, but more so a club sticking to a decade old philosophy. The early 2000’s success was built on a approach of patience at the plate. Take pitches, work counts, chase starters by the 5th or 6th.

It seems in recent years the league has figured this out, and now simply pours strikes over early in the count to then put A’s hitters at a regular disadvantage.

Is AsFan72 right? I've seen this opinion quite a bit over the years. Are the A's too patient, to the point where pitchers with good control can pour strikes in and blow them away?

Well, the easy answer is that the 2010 A's were 10th out of 30 teams in most first pitch strikes, so, no, they're not unique in this sort of thing. But what if we go deeper? How bad is a first pitch strike? What about contact? Do good teams make more contact or less? Swing percentage? 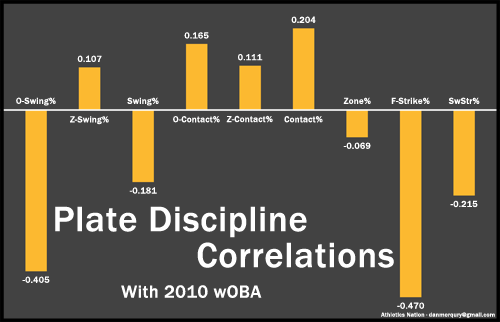 Explanations and more after the jump.

In order, the bars mean:

So is AsFan72 on to something? Is he correct?