That Was the Weekend That Was: Observations from Series #1

Share All sharing options for: That Was the Weekend That Was: Observations from Series #1 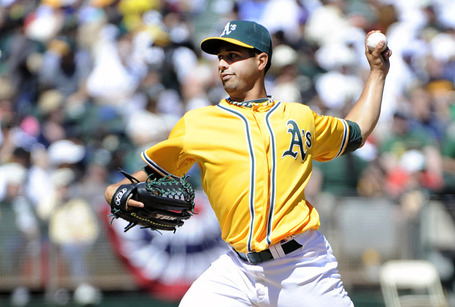 Gold is always a good 'vestment. 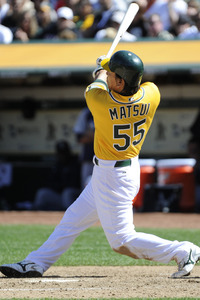 No one would be so quick to write off King Kong. And doesn't this picture make a sweet baseball card?

I dunno about you but I thought this was a wild first three games; truly in the grand Sergio Leone tradition of Il Buono, Il Brutto e Il Cattivo where we got to see things that were pretty good, at times monumentally bad, and often fairly ugly on both sides of the ball. There were moments defensively in this series where I said to myself, this is the second year in a row where they made a ton of errors early on... what is it that makes them come north from AZ without their gloves? Easy to blame Geren, but as much as I think he lacks whatever essential qualities as a manager he isn't the one on the field trying to catch the ball.  I know it's a Small Sample Size but Kouzmanoff in particular looked at times like he was playing third base for the first time in his life. I really hope this gets better because extra outs against Toronto, Minnesota and the White Sox are going to spell a disaster to rival Charlie Sheen's Hindenburg 2011 concert tour if it doesn't. 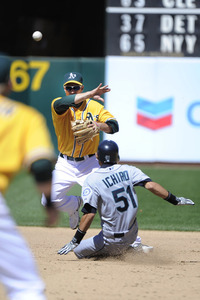 Unicorn Power and Presence Dep't: Mark Ellis is as professional, steady and likable a player as the A's have ever had.  Devil his Due Dep't: Ichiro is an electric player...if he'd played here (USA) his whole career he'd be in the conversation for best player ever to put on a uniform.

The game Friday night was a missed opportunity, I felt.  The (at moments, best-place-in-the-world-at-that-exact-time awesome) tailgate, the energy in the (completely packed, no more spots) parking lot, the standing room atmosphere of 36,000+, the chant of "Let's Go Oakland!" by the whole stadium all at once after the Nat'l Anthem ended... if there was ever a night where the A's needed to put on a show to match their status as Hottest Ticket In Town for a night and get some of those thousands to come back for another game, this was it.  The table was as set as the date for alien colonization was on The X-Files. 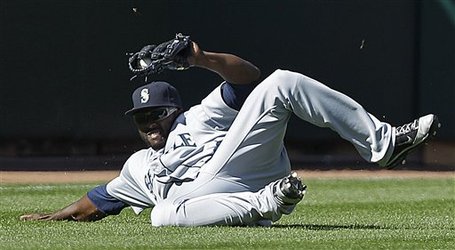 That's what you get for messing with The Famous Ralph.

I won't go back and crack open old wounds and recount the grotesquery of the first two games: you know what happened and what didn't happen.  What bothered me most about the second game was it validated my theory from the previous night which I didn't want to believe would prove true on Saturday: that the epically sophomoric performance on Opening Night wouldn't exactly send the casual fans in attendance scurrying to the Coliseum Ticket Booths to purchase more tickets for this entertaining spectacle they saw come faceplanting out onto the field Friday night. The switching of the radio station to FM at the last minute -- even though the new Wolf station does feature the amazing attribute of actual audibility throughout the Bay Area -- and even the shortening of the radio postgame show to just under 12 minutes 37 seconds probably didn't help matters in this regard either.  Someone needs to *cough* find the program director's direct email address *cough* so we can at least get it to 17 minutes.

The Saturday attendance bugged me, at 15,000+ and less than half of the overflow sellout the night previous.  Plus Milton Bradley challenged my roommate to a fight in the middle of the game, never a good idea. If there's one player or even athlete in any sport where you'd say if you heckled him at the right moment in the game and they hit it to him he'd blow the game, it'd be Milton.  Apparently he thought Ralph was heckling him, even though it was someone else further back who was simply chanting Bradley's name over and over BRAD-LEY BRAD-LEY BRAD-LEY.  At this point Bradley is already ready to revisit Ron Artest "Adventures in Section 126" of days gone by a couple of games into April here and will surely either kill or severely injure someone at a game someday, if he doesn't by some miraculous alteration of the fabric of the Universe discover the help he so desperately needs. 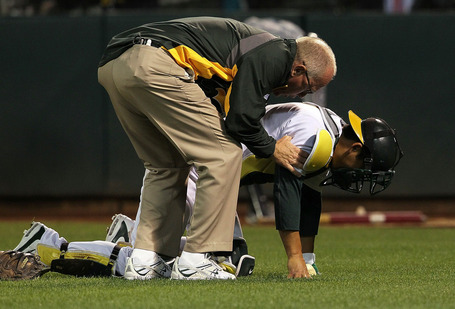 It's OK, Kurt... there were times I wanted to puke too.

As weird and disconcertingly unravelicious as the first couple of games were -- with their defense out of a 1950s Army LSD Training Film and their bullpen management that made it seem like Bob Geren thought he was still in Arizona (you could almost call it a flashback) -- the third game went a ways toward restoring faith in what we thought we had going into the weekend if not the season. The Japanese theme was awesome and necessary to put the spotlight on the needs of the people hurt by the earthquake and its subsequent domino brigade of disasters over there, and Matsui and Ichiro didn't disappoint on the field, figuring prominently in the action.  Ichiro's throw to nail Matsui at third after the latter had gotten his milestone 2,500th hit was more proof -- like we needed any -- that Ichiro is one of those rare dudes that seems to be able to do whatever he wants, whenever he wants on the field.  I don't usually go off on how awesome opposing players are, but I am a baseball fan and that guy is a baseball player, like him or not-so-like him. 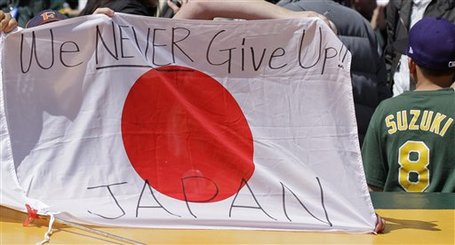 Honestly though, the final analysis of this series has to be that both teams often played like minor league squads and after weeks and months go by it'll just seem like two teams that were still working out the kinks in I-can't-believe-it's-not-Spring-Training-anymore mode.  I thought for whatever one series is worth Willingham looked like he is serious about adjusting to AL pitching and Coco looks more than prepared, if he can just stay on the field to set it on fire night after night as he is capable of doing. The starters looked OK for early, unhelped by the stalagmite-gloved cave-defense that kicked the ball around like a Strip-Hacky-Sack tournament at Burning Man. Gio really strikes me as a potential 20+ winner and that if he just pitches through mistakes and keeps his head, he could be the True Ace of this current crop of Young Golden Arms... when he stays together upstairs and doesn't beat himself with a mental meltdown the sky is the limit for him. Thank you, Captain Obvious. 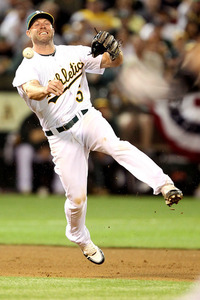 Smile, and the Official Scorer smiles with you.

I sure hope I am smiling at the end of this road trip... it isn't going to be an easy one.  Texas is crushing the ball to a fine powder that and Josh Hamilton hasn't even started to hit yet, so the A's can't afford to fall too far behind the Arlington Assault & Armageddon Aggregation. I know it's earlier than R. Kelly's cutoff age for dating, but this three-city jaunt through Toronto and Minneapolis and Chicago ought to give us a barometric readout on what we may and may not have.  I hope Bailey gets back soon and intact because not having him makes us less of a bullpen and less of a force to be reckoned with at the tail end of close games.  I'm with a lot of people who think Brian Fuentes should be allowed to face right-handed batters roughly no times out of never, or less. 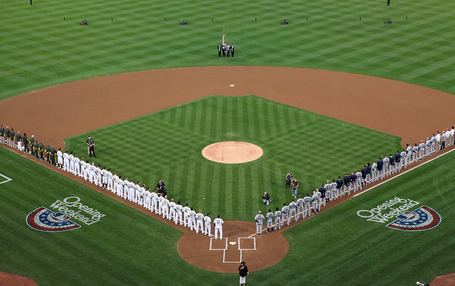 This was my first Opening Day ever, and it was quite the time.

All right, this post is already too long.... I will have the first part of the Ken Korach Conversation next week for you. If you want to check out the raw tape of it (forgive us but it's 82 minutes long so it will have to be transcribed a chunk at a time) I tossed it up for those so inclined.  Otherwise enjoy the day off and I'd love to hear what you thought of the weekend in the Comments.