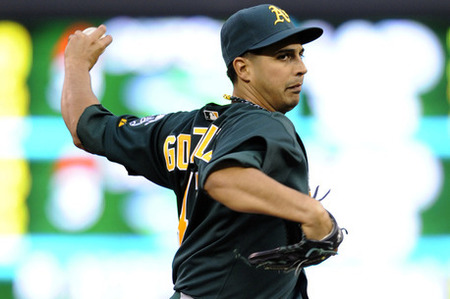 Anything you can weave, I can weave better
I can weave anything better than you. 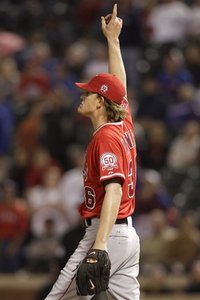 Hey! You out there! This is how many losses I'll have after this game right here.

Hello and welcome to Monday Night Madness as your A's begin their season series vs. the hated Slegna of Orange County. The Halos are fresh off being stomped to a fine red powder (kind of like Lik-m-Aid when we were kids, but more bitter and minus the tasty sugar dipping-stick) by the Red Sox, who swept them aside like so much rubbish in a four-game set over this past weekend. This epic fail at home leaves the LAAAAAAAAAAA at 12-10, in 2nd place and a game up on your 2011 Oakland Athletics (and 2 1/2 behind AL West leader Texas). The A's are 3.5 out as they prepare first for this series and then for a four-gamer of their own next weekend at the Coliseum with those very same Rangers. Tonight is quite the marquee matchup as Gio Gonzalez opposes Jered Weaver... both guys have been stellar, with Weaver leading the world in strikeouts and sporting a 5-0 record and Gio featuring a microscopic 1.80 ERA along with a curveball that would make Mickey Mantle's knees (which were never that solid to begin with) turn to soup. 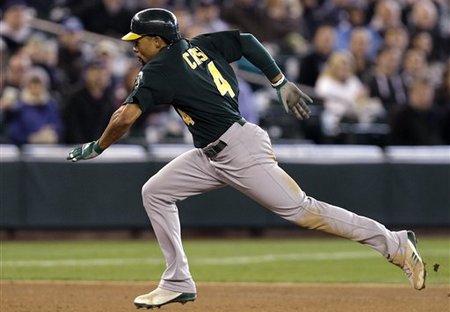 Speaking of knees, if it were possible for me to fall on mine and plead with you to stay healthy this season, I'd do it.

Our boys are coming off a weird series split in Seattle where once again they failed to materialize for the first two games and then played very solid baseball the final two. The last couple of games have seen the usual lights-out starting pitching but with the added and necessary attractions of good defense and some timely offense, particularly from our friend Covelli pictured above. His catch to rob Miguel Olivo in dead CF yesterday is probably the play of the year so far and the fact that he is still in one piece after smashing into the wall like that is something we are all feeling blessed and thankful for. Coco's no Matt "the Splat" Carson... when he hits the wall full speed, he at least comes down showing the baseball nestled comfortably in his glove. We need more catalytic play, on both sides of the ball, from him to get this series to where it needs to be... that is, ending in another winning road trip for the Green and Gold. 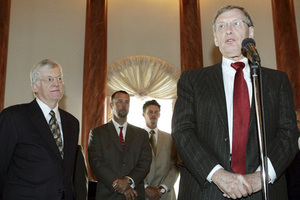 It looks as though the A's have activated Michael Wuertz for this series, optioning Bobby Cramer (who hadn't pitched in so long he was seen yesterday in the visitor's bullpen wearing a pensive expression with the schematic blueprints of several Shell Oil rigs spread out in front of him) off to AAA Sacramento. Word on the street is that our long-lost friend Andrew Bailey has been throwing more and more and could return as well in a little while here, so here's to the 'pen getting back to mightier-than-the-sword status with everybody healthy and happily hurling the heat. 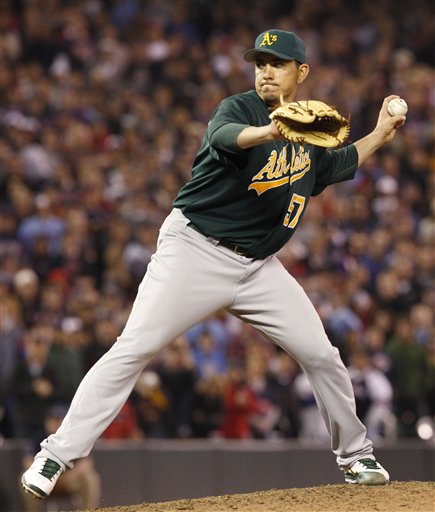 All right, I will put up the lineups when they are posted... enjoy the game and I'll be by with more threads to hold all of your pithy quips-n-FIPs as needed.