Bitey Parrot on the A's side after all?

Share All sharing options for: Bitey Parrot on the A's side after all?

All I can say is, wow, the impossible is now possible. The A’s came into this game today having lost two in a row, the last in pathetic fashion due to bad managing and worse relief. Facing Justin Verlander’s 100MPH fastball was just salt into the wound. Well, the A’s kept the sketchy defense, proving that the Bitey Parrot still exists, but the offense managed to come through enough to save the day. Through it all, the A's win 6-2.

The game did not start off too well for the A’s, as Dallas Braden got into trouble early, allowing a 2nd and 3rd situation in the 2nd inning. A ground ball to Barton at 1st looked like it might save the day, with a chance for a 1st-Home Double play. Barton, however, avoiding 1st, threw wide of home, allowing the run to score and giving the Tigers a 1-0 lead.

But that would not hold up for long, surprisingly enough. Braden managed to get out of another 2nd and 3rd no out situation in the 4th with a well-played groundout, strikeout and pop out. In the bottom of the inning, the A’s offense came alive, with DeJesus, Willingham and Matsui hitting three straight doubles in a row, and Kurt Suzuki getting a Pseudo double to follow up after Ryan Raburn missed and overslid Suzuki’s single, to net the A’s 3 runs in the inning and a man on 2nd.

In the bottom of the 5th, strangeness once again turned its head. With a dejected Braden in the dougout, to leave the game due to Shoulder stiffness, Daric Barton led the inning off with a walk. The next batter, David DeJesus, came up to the plate and Justin Verlander did something I have never seen before. Verlander seemed to get caught between an idea to throw to 1st and a pitch to home, took his back foot off the rubber, and threw… home, and hit DeJesus. After much confusion and a meeting with the umpires, Barton was placed at 2nd, DeJesus stayed at bat (he would later walk on 2 more pitches), and the play was ruled a failed pickoff and an E1, later changed more appropriately to a Balk.

More after the jump.

Unfortunately, the A’s would not net anything out this 1st and 2nd no out situation, but they would come through in the 6th  on a Bitey Parrot Kouzmanoff double, who was knocked in by yet another double, this time off the bat of Coco Crisp.

In the 8th, the A’s would add on, with Ryan Swingles Sweeney delivering an RBI triple to score Kurt Suzuki from 1st, and Kouzmanoff would deliver an Sac Fly to get Sweeney in, giving the A’s a 6-1 lead.

Despite some scares, the A’s relief corps managed to pull the rest of the game off, with Ziegler and Breslow throwing scoreless innings for the 6th and 7th respectively.  Grant Balfour came into the 8th and threw a scoreless inning.

And now it’s time for the Bob Geren Rodeo. Taking the wrong lessons from the previous game, with a 6-1 lead in the 9th, Geren decided to leave a tired Grant Balfour in the game, who proceeded to allow the first two runners to reach via a single and a walk. With two on, and now a save situation, Geren decided to bring in Brian Fuentes, he of the blown 2-inning attempt the previous day, in an attempt to over-work his fill-in closer just a bit more.

Fuentes got the 1st runner out on a pop foul to Barton, but walked the next batter to load the bases with 1 out. Jackson grounded out 3-6, but with no double play, to make the game 6-2. Laboring, Fuentes managed to close out the game in spite of Geren, to end the game with an A’s victory, with a long fly ball to the track in dead centerfield. Heart attacks for all. 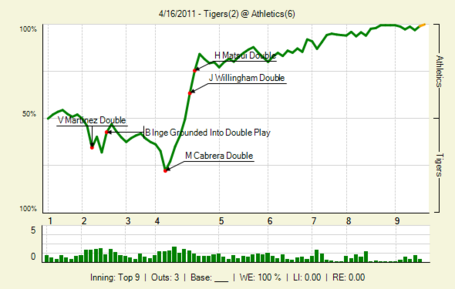 To somewhat copy Jeff, since we are making homage to the Bitey Parrot...