Bumping Zephyr's scoop. This is a great day for A's Radio. - Zonis 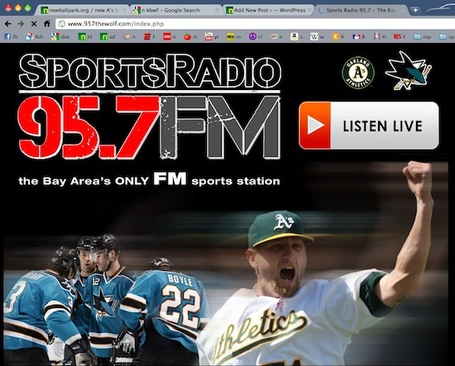 Wolfpack today, 95.7 The Wolf became SportsRadio 95.7 FM, The Bay Area’s FM Sports Station & home for the A’s & Sharks. We thank you for 4 years of devoted listenership. We will never be able to repay you for the loyalty, passion and friendship. Unfortunately, the local demand for a country music station was not large enough & we were faced with a very difficult business decision. Thanks for 4 amazing years. The Wolf

Additional information from Susan Slusser thanks to Flashfire for the link:

The station promises A's and Sharks' programming, with on-air personalities and other programming to be announced at a later date. Sharks' playoff games will remain on KFOX for the playoffs, with simulcasts on 95.7 FM when possible (i.e., not during A's games) and Entercom is in discussions with the Sharks about moving their broadcasts to 95.7 FM next season.

Dwight Walker, Entercom's market manager and vice president, tells me that Entercom also will be having talks with Stanford (currently on the doomed KTRB) and Cal today.

"We'll be talking A's and Sharks, two winning franchises that aren't getting as much attention as they could," he said. "But we'll also be talking Warriors, Giants, Earthquakes, SaberCats."

You can listen to their internet stream right now as they transition over. Oh and by the way, 95.7 has a brand new SportsRadio 95.7 FM Facebook Fan Page.

One other tidbit regarding shows:

The station will feature local personalities, although the on-air lineup hasn’t been announced.   “There is a lot to talk about and a lot of people who want to talk sports,” Walker says.

The company is looking to leverage a lot of the lessons it’s learned in Boston where sports WEEI (850) has been a dominant station for many years.  WEEI VP of programming Jason Wolfe is working with consultant Rick Scott to develop the new San Francisco station’s line-up.  They’ll also use network shows from Sporting News Radio.