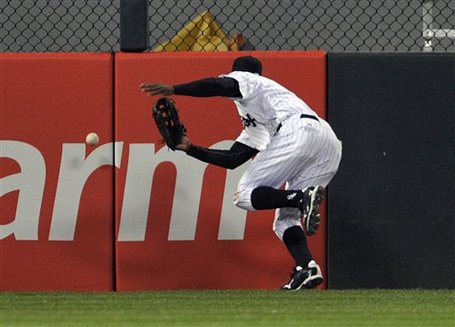 Juan for the blooper reel. 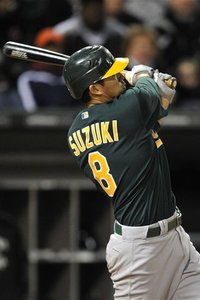 It was the top of the 8th inning and I had a whole recap almost done.  Clever headline ("Lillibridge to Nowhere"), amusing wordplay, and much gnashing of teeth over what might have been.  But I just couldn't get any good pictures, nothing made sense. I had the sudden thought that I should just take the leap of faith and scrap the whole thing... just erase the text field and start over and the game would flip.  An hour later I am writing my second recap of the night, but this one is a pleasure and I'll do two any ol' Monday night these guys wanna steal a delicious decision from the jaws of despairing defeat like they did tonight. 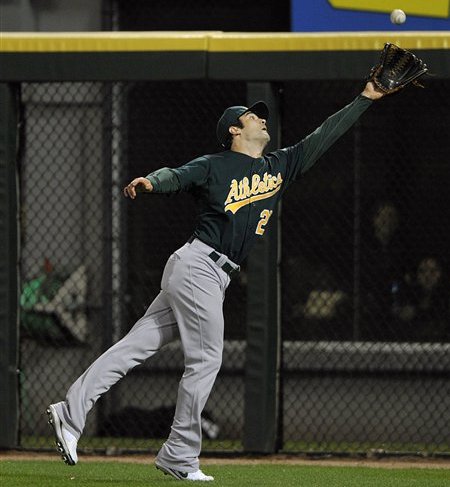 Optimist Prime, who is someone I look up to, once told me sagely that if you put yourself out there, good things will happen.  Conor Jackson on this play notwithstanding.

My esteemed friend Mr. Gaijin Suketto was saying words to the effect that every team wins and loses 60 and it's the remaining 42 that make the season what it'll be.  He said he felt as if the A's had already lost a couple of those 42, so wouldn't it be nice right here to win, in unlikely fashion, one of those sure 60 losses? Buehrle -- despite deceptively poor W-L numbers -- typically shuts down the A's, the Sox were hot coming in, and -- in a trend that did not change tonight despite the result -- the Athletics haven't been hitting a lick.  These words stuck in my head and maybe that's why I decided to scrap the unhappy recap and wait for the team to supply me with an opportunity for a much groovier one. 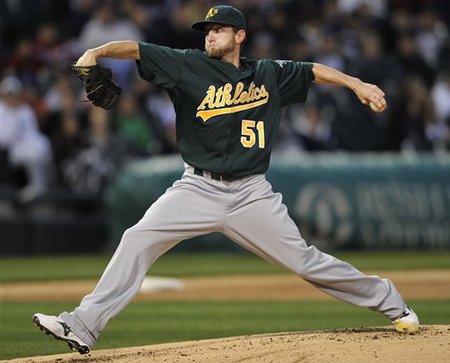 It all started as advertised: Buehrle and Braden -- just the 21st pair of pitchers who've been Perfect ever to face off against each other in a game -- were just staggering.  The first game thread featured NO HITS for either club, a first for me, anyway.  Both of them were ruthlessly efficient and worked so fast that if you blinked you'd have missed another filthy pitch.  It was weird because they were working so fast, yet when they'd throw it it was as if time would slow down somehow... these guys' changeups were so dastardly there were at-bats where the hitter could have swung TWICE before it got there.  The A's didn't even get a hit until Kurt Suzuki -- who would surface in the drama of this game later on -- singled in the 6th.  By the time this bizarre game was decided, both starters would be long gone. 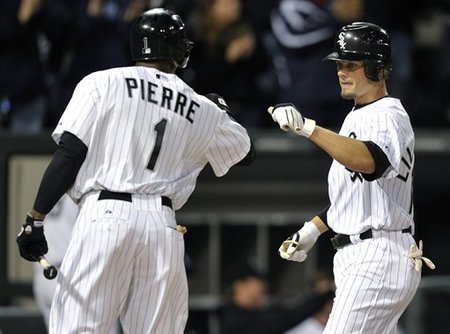 Lillibridge's 5th inning handshake deal designating Pierre to be the goat did not go unnoticed by the cameras.

Brent Lillibridge guessed right ("fastball") and took Braden just barely out of the yard in the 5th and for a long time it looked like that would hold up and the A's would find themselves, this time, on the wrong side of a 1-0 score.  Buehrle went 8 and probably should have finished, but Ozzie Guillen went to the struggling Matt "Every Rose Has Its" Thornton to close and it unraveled fast on him.  Andy LaRoche led it off with a double, with Cliff Pennington running for him.  Coco Crisp hit a ball hard but failed to advance the runner, setting the stage for the play that turned the A's money green tonight, courtesy of Juan Pierre misplaying Barton's (catchable) ball into two bases and a 1-1 tie in the top of the 9th. 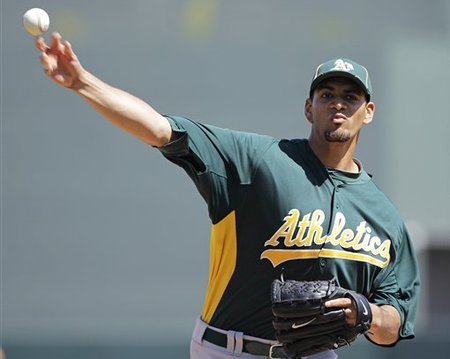 This brings us to the other subtext to this game: the emergence of Tyson Ross, in his first action of 2011, with three pressure-packed, not-much-margin-for-error innings that held the Sox down and allowed Oakland to heist this game from the van down by the river it resided in for 8 full innings. The 9th was insane, with Suzuki (he was in the middle of lots of stuff tonight) dropping a foul pop and forcing #66 to get four outs.  Tyson was equal to the task, striking out Brent Morel (The Sox have way too many Brents, IMO) with men on 2nd & 3rd on a devastating breaking ball that brought a discernible groan from the US Cellular faithful. I should also mention -- for all you K-rate enthusiasts out there -- that A's pitchers struck out 13 tonight (7 by Braden, 4 by Ross and 2 by Fuentes). 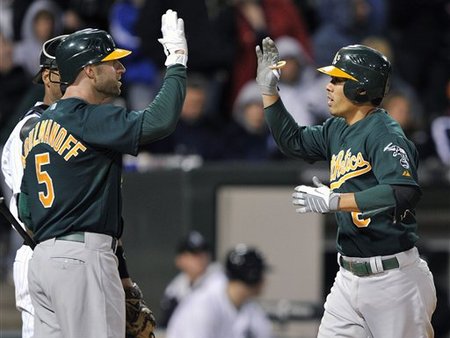 What can you say?  Zooks hit a line drive bomb off Jesse "Whooping" Crain in the top of the 10th that never got more than 8 feet off the ground and Brian Fuentes got 'em 1-2-3 in the bottom of the tenth to notch his third straight save -- he even got right-handed hitters out! Again! -- that was all it took for the A's to grasp their first modest (3-game) winning streak of 2011.  Say what you will about Fuentes, but aside from his blister issue that got him rocked last week, he's been mixing up his medicine beautifully and showing a different look each night to perplex the opposition. Last night he was all changeups in Minnesota; tonight it was more of a fastball diet in Chicago.  Anyway I am just saying, we could do worse until Bailey returns, wouldn't you say?

Tomorrow we go for four in a row with the newly-tremendously-wealthy Trevor Cahill taking the ball against Edwin "I Hope Willingham Hits 3" Jackson. Join the inestimably automatronic DanBot at 5pm as the winning streak rolls on!!!!