Opening Day Tickets: Interested in sitting with a group for Opening Day? If we can get 25 people to commit to $21 seats (section 231), I will start collecting the money for the group tickets. Post in the thread ASAP so I can get these ordered.

The A's got smoked by the Rangers earlier today by the score of 9-2. DeJesus and Powell both hit homeruns. Braden and Blevins both gave up three earned runs.

Well, after attending Spring Training the earliest weekend I've ever been, I'm full of promise (and yet, more questions) about this 2011 team. Despite attending four games at Phoenix Muni, I saw exactly two homeruns. Just to put that in perspective, I saw more than that in a single game between the Giants and the Dodgers. At night.

I did get a pretty good preview of Opening Day starter Felix Hernandez. Here is a picture of him facing Chris Carter. Carter struck out. You're not surprised. 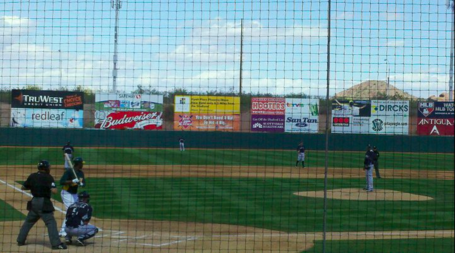 Gio looked absolutely spectacular in his outing. He was consistently hitting 93-94 on the gun (I may have stolen a glance at the radar) and his curve-ball was clocked at 78. Nasty. 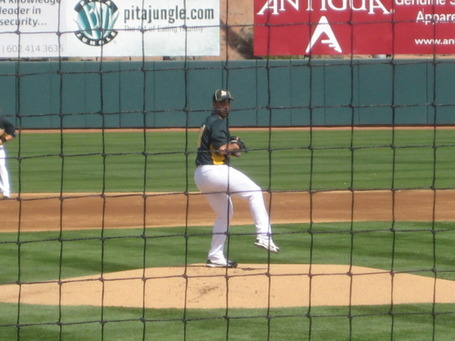 Brett Anderson looked equally as sharp in his outing, and in the race for the fifth starter job, my pony Brandon McCarthy put up some good numbers this weekend, while Josh Outman struggled in his start. I stand by my "McCarthy For Starter" pick, but there are many weeks to go before that decision will be made.

In other news, I was not overly impressed with either Chris Carter or Michael Taylor in the at-bats I saw. There just doesn't seem to be a lot of solid contact and the outside slider is way too tempting of a pitch for both of them. I did see a banner game by third baseman Wes Timmons on Saturday and it made me want to root for him.

Joey Devine had a terrible outing on Monday (he walked four of five batters), and Geren used both Ziegler and Fuentes to close games over the weekend. No sign of Andrew Bailey as of yet.

I did see an at-bat by Max Stassi, and I managed to snap a picture of Grant Green, who looked good at the plate; working the count and making solid contact. 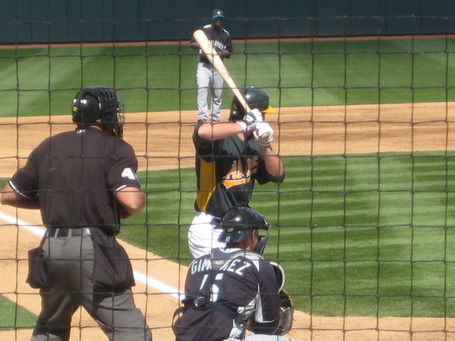 And for what it's worth; it's not likely that he'll start Opening Night, but Conor Jackson had two incredible at-bats against Felix Hernandez.

And how cool are Spring Training night games? 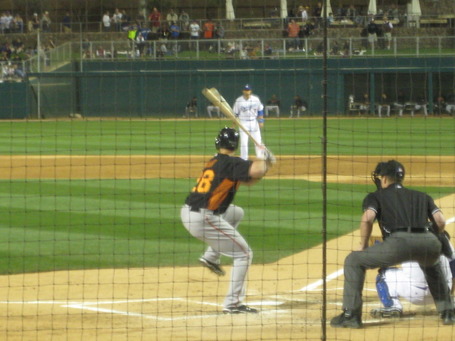 How many days until Opening Night?