Grab Bag! (or, with apologies to Fremulon Insurance, Gallimaufry!)

Share All sharing options for: Grab Bag! (or, with apologies to Fremulon Insurance, Gallimaufry!)

I'm going to try something a bit different this week. Instead of a more focused post on a single topic, this will be a collection of links, graphs, and other interesting recent baseball stuff that's floating around the internet. Feel free to post your own in the comments.

I could probably do a weekly feature on the amazing improvements that Appelman and crew roll out to the site on a regular basis, but this one is one of the coolest new tricks I've seen in a long time—the PitchFX section has been upgraded with customizable heat maps. 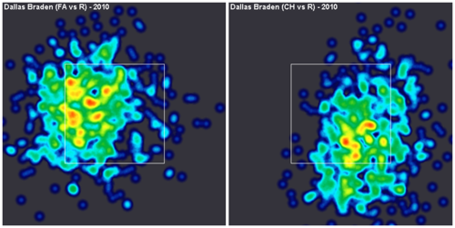 This is the strike zone location of every fastball and changeup that Dallas Braden threw in 2010 to right handed batters, from the catcher's point of view. The two maps make Braden's strategy very clear—he gets batters used to his fastball coming in high and tight, and then he'll lob his ridiculous low-70s changeup and float it through the low outside corner. Hitters don't stand a chance.

On a slightly less amazing note (but still worth mentioning), Fangraphs just added the 2011 projections from Marcel and a new system, RotoChamp. They also added another customizable graph type, with the addition of Joshua Maciel's WAR grids. To be honest, I'm not all that enamored with the grids, considering that they're basically a flashier, less informative version of the WAR graphs already on the site, but they could be worth a look.

Is a Rule Change Behind "The Year of the Pitcher"?

Nick Scott at Royals Authority uncovered a very interesting 2010 rule change that, for some reason, flew entirely under the radar.

I was recently looking at the Official Rules of Major League Baseball and on page number four they have a section titled "Changes for the 2010 Major League Season".  I hadn’t recalled reading anywhere about notable changes to the rule book in 2010, so I reviewed the items to see if any major changes had been made.  The first few changes were about how to draw the lines of the field and the coach’s box, again nothing of real importance.  However, the fourth bullet point read: "Reduced maximum bat diameter to 2.61 inches.  (Rule 1.10(a))".

In the 2009 rules, the bat was allowed to be a maximum of 2.75" in diameter.  The last time the maximum diameter of the bat had changed was 1895 when the size changed from 2.5" to 2.75". Therefore, the allowable bat diameter shrunk by 5.1% in the off-season immediately prior to the "year of the pitcher" and it was the first time such a change had been made in 114 years.

I'm not entirely sold on the analysis (because apparently only 35% of MLB players used the 2.75" max diameter bats anyway, and there may have been some grandfathering going on), but it's an interesting idea nonetheless, and is certainly worth following up on with another study.

The Five Most Exciting World Series

What's the difference between a boring baseball game and an exciting one? Max Marchi at The Hardball Times tried to use numbers to answer that question, and his results make for a great read. His methodology, at its heart, is the use of Fangraphs and their WPA metric (which powers their game graphs, like this awesome one). Marchi measured three factors that contribute to baseball excitement: a score that stays tight and close, rallies that propel losing teams into the lead, and important innings that occur late in the game. By measuring the amount of each and averaging the three, Marchi came up with a sort of "game thermometer" that measures how hot each game is.

Max Marchi ran through a list of exciting games, but his latest article ranked the top five most exciting World Series in baseball history. The classic 1991 Twins-Braves and 1975 Reds-Red Sox matchups ranked first and second, but more interestingly (at least for us!), the '72 Series between the A's and the Reds ranked fourth.