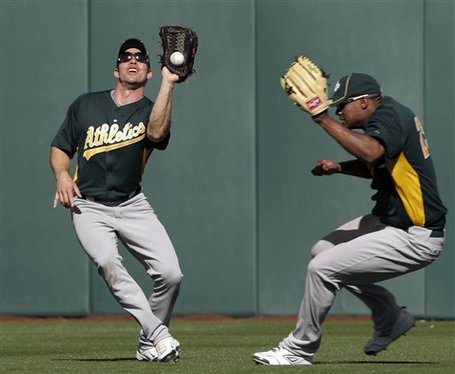 One of the less atrocious plays for the A's in the field today. 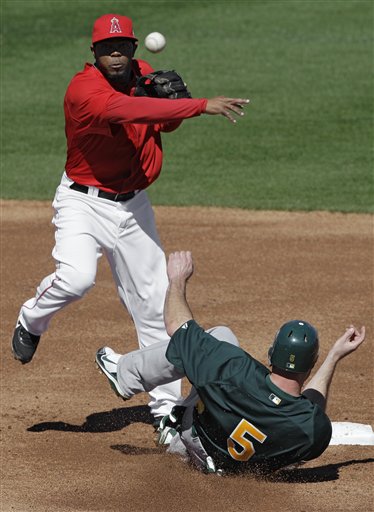 Now that Howie Kendrick has had his eyes removed, he can really turn the DP.

Well, at least it doesn't count.  In honor of the last day of February (also my little brother Jeff's 40th birthday), the A's played the field with gloves made of ice today instead of the customary leather ones and fell to the Angels, 8-7.  The trouble started immediately in the first, when Chris Carter -- whom webcaster Vince Marotta said looked like he had never played baseball before in his life before this afternoon -- started the Comedy of Errors, misplaying a Howie "Barbie and" Kendrick single off starter Dallas Braden into the Halos' first two runs.  Things got no better for him in the 4th as he took a step in on a Peter "Petty" Bourgos ball over his head, playing it into a double and leading to the third Orange County run. The clank-fest continued in the 6th, as more mayhem led to a 6-2 LAAAAAAAAA lead, exascerbated by a Jai "McCabe and Mrs." Miller booting of a shallow fly ball that really should have been caught.  The hated ANALAAAAAs extended their lead to 8-2 in the 7th on hits by players I have never heard of like Andrew Romine, Efren Navarro and Angel Castillo and a sac fly by someone named Alberto Rosario.  Overall the A's made four errors in this game, but WTF it's not even March yet, right? 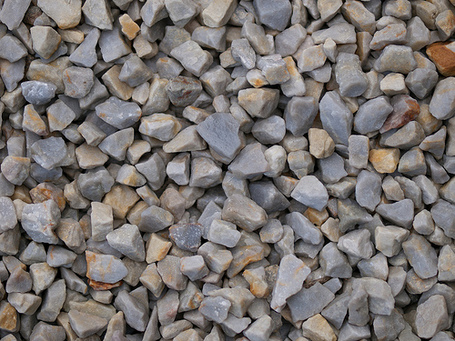 In a terrifying display of fielding, Chris Carter's glove shattered into these million pieces on a line drive to LF and he had to be removed for a more mobile statue in the 6th.

The A's, who (in midseason form) had gotten on the board in the 5th on two bases-loaded walks, got some big poppage from Michael Taylor, who HR'd in the 8th with two aboard to get them back in the game at 8-5.  An obligatory teA'se in the 9th followed, with the Athletics plating two more on a GIDP by Michael "People's" Choice and an RBI by Jai Miller.  Taylor came up as the go-ahead run but just got under a bid for a second home run, flying out to end the game. 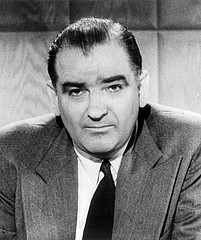 I couldn't find a picture of Brandon McCarthy in an A's uniform, so I opted instead for Joe, who was rumored to be a pretty good pitcher in his day... just ask his (alleged)catcher, Roy Cohn. Not that Joe himself ever spread unfounded, scurrilous rumors about anyone, of course.

The A's pitched pretty well in this game -- Brandon McCarthy in particular looked sharp and did himself no harm in his quest for the 5th starter slot -- and they did get 13 hits to hit double digits for the second consecutive game, so it wasn't all bad. In total there were 17 pitchers used by both teams today so you know it was a Spring Training thing all the way... right down to Coco Crisp, who had the day off after his offensive outburst yesterday, setting up a lawn chair beyond the centerfield wall and cracking open a few cold ones while he watched the action. OK, I made that last part up.  It's early in ST here and I'm still working on my stuff so forgive me, please. 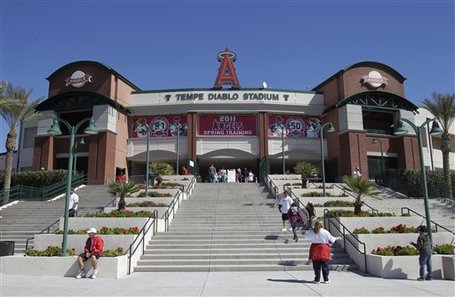 Nice to see the Angels take their "tacky" with them when they head for Arizona... this place looks like a cross between AT&T Park and that casino in Vegas that is done up to look like The Parthenon.

We'll do it all again tomorrow at noon as the A's take on half the Cincinnati Reds... Gio Gonzalez will make his first appearance of the fledgling Spring and rumor has it Brett Anderson will also throw a few, so tune in for the first DanMerqury game thread of 2011 with all the android bloodshed and robot chaos you can stand to begin the month of March.  And just think, if we lose again, it is perfectly acceptable to "Blame Pam."  (But surely this won't be necessary, cuz we are gonna win!!!!) 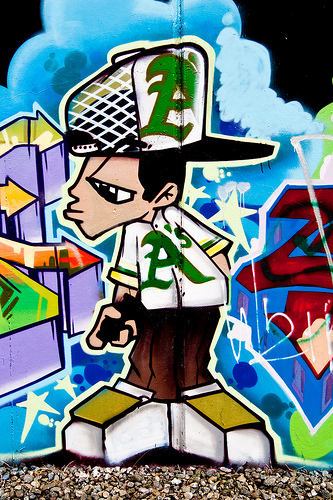