That man would be third on the list of SS's in the Hall in stolen bases.

He made the All Star Team 6 times:

Here is an awesome write-up about career WAR with guys with more fielding runs than batting runs for their career. Our guy is number 17 on this All-Time list, surrounded by some great names.

Here is the list of shortstops in the Hall of Fame: 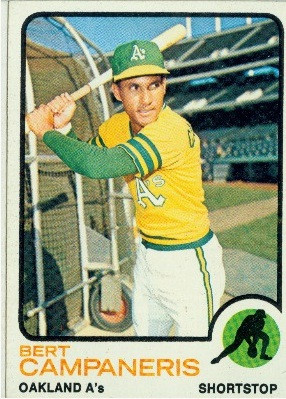 On September 8, 1965, as part of a special promotion featuring the popular young player, Campaneris became the first player to play every position in a major league game. On the mound, he pitched ambidextrously, throwing lefty to left-handers, and switched against right-handers.

Campaneris lives in Scottsdale, Arizona, and often participates in Old-Timers' games around the country. He also conducts baseball camps and is an active participant in the Major League Baseball Players Alumni Association, often playing in charity golf tournaments.

Getting to know Campy this past month was one of the single greatest honors I have ever had, and listening to his rich stories about the past drove home to me that there are currently two glaring holes with concern to honoring Oakland A's history:

1. Bill King is not in the Hall of Fame.

2. Campy's jersey number, #19, is not retired by the Oakland Athletics.

And while we keep trying to rectify #1, we can do something about issue #2.

While he may not have had the numbers to get into the Hall of Fame (matter of some debate as far as I am concerned) why is he not recognized by having his jersey retired?

Campy is a great ambassador for the game and for the A's, had awesome numbers and is arguably one of the most productive players in our franchise history. Let's honor him while we still have him.

Lew and Co. I know you read these pages. Our crosstown rivals do a slendid job of honoring their heritage, let's take a cue from them and at the very least let's immortalize #19 in tarp. Please.