Merry Christmas (Eve), everyone! Happy Hanukkah, Festivus, Saturnalia and every other holiday you celebrate.

Figured we'd take a break for a bit from the Gio Gonzalez to the Nationals hoopla, and take on more of a lighthearted topic.

Who are your favorite A's players of all-time? It doesn't matter if he was the best, the worst, the hottest, the ugliest, etc. Just players who you enjoyed watching in the green and gold (or blue and white).

Dallas Braden's perfect game came when I was living in Stockton, so I felt a connection. I admire his love for the 209 and Stockton, which often ranks among one of America's most miserable cities — seriously. I understood. I totally understood. It's kind of like A's fans love for the Coliseum. Yeah, Stockton's a dump, but doggone it, it's his dump. He was also awesome enough to come through the minor leagues with a screwball, and he's able to get batters out without a 95-mph fastball or a nose-to-toes curveball. 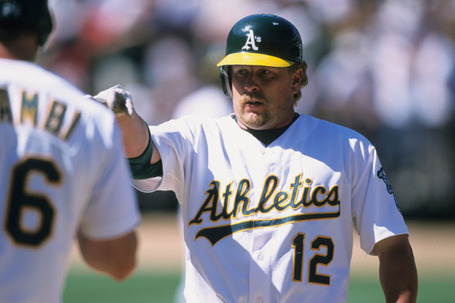 Yeah, I tend to like players who don't have raw, enviable physical tools, but somehow just get the job done. The very first A's game I ever went to (I can't recall the date exactly), Matt Stairs hit the game-winning home run against the Minnesota Twins, instantly becoming my favorite. After the game, I went to wear I thought the A's players came out of the parking lot in search of his autograph (hey, I was still a kid at the time!). We only saw Twins.

A couple years later, the A's dealt my first favorite player to the Cubs.Yeah, I'm kind of used to that happening now. I just liked how he was, in words that statheads abhor, a gritty gamer. The summer before I went off for college, I saw the Bulldog poster at the year-end tent sale. That poster proudly hung in my room throughout my time as a student.

Toward the end of his career, he looked more like a beer league softball player than a finely-tuned outfield machine, but he got it done, coming off the bench to deliver key historic home runs. 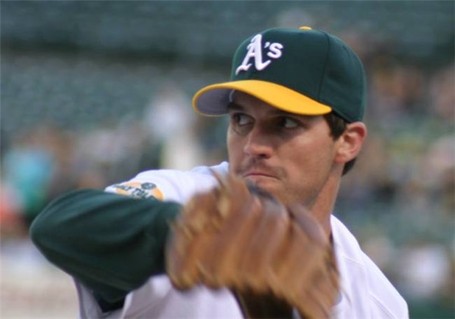 They say chicks dig the curveball, but this dude thought it was pretty awesome too. Like Braden, Zito is in no way a hard thrower. I admire that. I was much more a fan of Greg Maddux than Randy Johnson. It takes a little more talent to be able to get out when you don't have a blazing fastball in your back pocket, I feel. He was a laid back, California surfer dude who also got the profile treatment from one of my sportswriting idols, Pat Jordan. Zito just seemed cool. Like, whatever, brah. 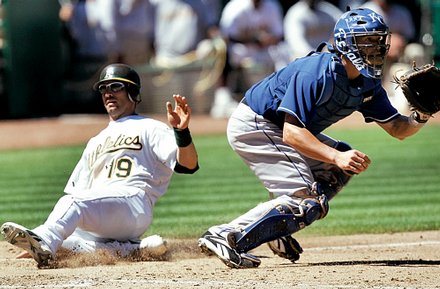 Before I could afford to get tickets anywhere else, I sat for a season in the left field bleachers, along with Saint, High Street, Duke of LF, et alius. It was amazing. Around the same time, a Venezuelan infielder was coming to prominence, first off the bench, then as a starter. He earned his own cheer — MARCO! SCUTARO! His 2006 ALDS heroics won't be forgotten for quite some time. Other than Dallas Braden's perfect game, that was probably the last moment of pure joy for A's fans. Scutaro's journey to the major leagues is also documented in the amazing film, Player to Be Named Later. If you haven't seen it, do so. It also makes the perfect gift for a baseball fan.

So who were some of your favorites throughout the years?