Acquiring Power Isn't More Valuable When a Team Has None

Share All sharing options for: Acquiring Power Isn't More Valuable When a Team Has None

The A's are punchless. They haven't finished in the top half of teams in Isolated Power since 2003. I can count on two hands the number of times an Athletic has slugged .500 this century. But I keep reading things about team "balance", in that the A's should target a slugger for the sole reason that the team doesn't have one. There seems to be a fairly widespread misconception that if a team lacks power, acquiring a power hitter will provide a larger boost to the team than if they already had four 30 HR players. It's as if the value of power is dependent on the team's slugging percentage.

I know this topic has been pretty much beaten to death in sabermetric circles, but there's no problem with re-testing those conclusions and bringing it to a different audience. So here we go.

Some background first: A few years ago, Tom Tango created wOBA, which is a stat that adds together all of the possible batting outcomes (singles, doubles, triples, walks, etc) and weights them appropriately to come up with a total picture of how valuable a player's offense is. The important thing here is that wOBA assumes that offensive value is linear, which means that if power is indeed non-linear, I can use wOBA as a baseline to hold everything constant except power. That way, I can find any possible deviation from the linear model. 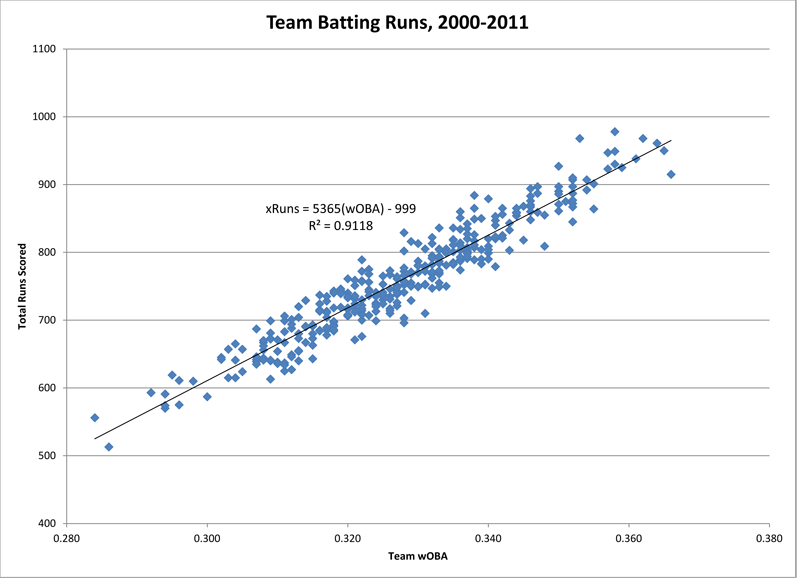 What's important here is the trendline. The relationship between wOBA and runs scored says that if I multiply a team's wOBA by 5365 and subtract 999, I'll get the average amount of runs scored. For example, the 2011 A's had a wOBA of .302, which means that on average, that team will score 621 runs on the season. The 2011 A's actually scored 645, so they overperformed the estimate by 24 runs. For convenience, I'm going to use the term xRuns to mean the expected amount of runs predicted by this model.

Now, if it's true that acquiring power is worth more when a team has very little of it, I should see a pattern in how the data deviates from that linear trendline. The wOBA model assumes that power is worth the same amount at all levels. If the value of power is greater when a team's power is scarce, then the low power teams would be losing out on runs that the linear wOBA model predicts. If true, the teams that have a low amount of power should tend to underperform their wOBA estimate.

So I put Isolated Power on the x-axis and Runs minus xRuns on the y-axis to show how much a team over or underperformed the wOBA model. If power isn't linear, a pattern should emerge. 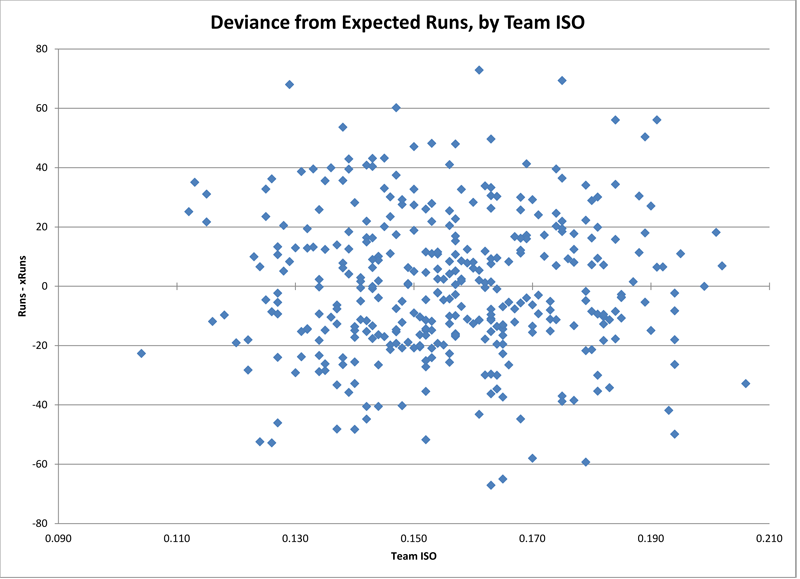 Nope. It's a uniform scattering of points, with no discernible pattern with respect to either variable.

Now, I should make it clear that acquiring a young slugger is rarely a bad thing. But acquiring a slugger simply for the sole purpose of getting a slugger, when you have the opportunity to get a better overall hitter? That's a bad move. There's no reason to covet someone like Mark Trumbo, who has tons of power but nothing else, adding up to a below-average hitter for a first baseman. Better sluggers don't necessarily make offense. Better hitters do.