The star blue-chip prospect of the return for Trevor Cahill is RHP Jarrod Parker, the ninth overall pick in the 2007 Draft. He made his professional debut in the beginning of 2008 and made it up to AA Mobile in 2009, before elbow troubles forced him to get Tommy John surgery. Thankfully, he's pitched a full year in 2011 at AA without incident. John Sickels, take it away:

Parker is 22 years old, turning 23 in November. Listed at 6-1, 195 pounds, he's put on about 15 pounds of muscle and strength since high school. His key pitch is a hard sinking fastball, working at 92-95 and hitting 96-97 at its best. He's lost no velocity since the surgery, although he's still working on command refinements.

His slider was his out-pitch pre-surgery. Scouting reports indicate that he's not throwing it as much as he used to, but it still rates as a plus pitch. His changeup has improved a great deal, ranking plus at its best, and he'll mix in some curves on occasion, giving him four pitches to work with. He's especially tough on right-handed hitters, holding them to a .209 average with just two homers this year.

Parker stayed at AA for the whole 2011 season, before getting a small cup of coffee in the majors at the end of the year. He has a grand total of 6 innings in the majors, 5.2 on one start on September 27th, and 0.1 in the NLDS. Both were at Chase Field in Phoenix. Unfortunately, he's never pitched in the Arizona Fall League (owing to his surgery recovery timetable), so those 6 innings are the only innings the PITCHf/x system has seen from him. Because of the small sample and the single location, the usual caveats about PITCHf/x camera calibration apply in full force, so consider everything below with a grain of salt. 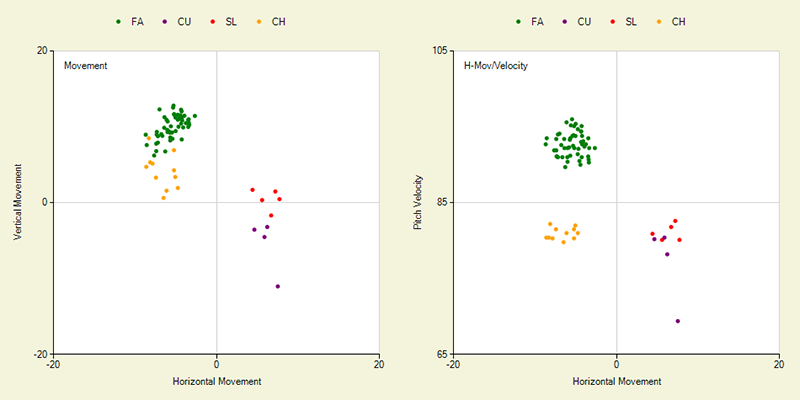 If you're running Athletics Nation in narrow mode, the chart above will be cutoff, so click it to enlarge and see the whole thing.

The first chart on the left is horizontal and vertical movement. The second is horizontal movement with velocity on the y-axis. As you can see from the second chart, the MLBAM classification algorithm did a pretty decent job sorting out Parker's pitches, especially considering that it's never seen him before. However, it seems to have split his sliders in half, calling some of them sliders and others curveballs. I'll make the most probable assumption that the entire group of pitches is his slider, and the purple dot that's separated from the rest at the very bottom is his curveball.

Fastball: Sickels says that it's a "hard sinking fastball", and if we can trust the calibration on the Arizona PITCHf/x system, I really don't see the sink at all. Compare to Trevor Cahill (the blue dots here) or Brandon Webb (the green ones). See the height difference? Cahill's sinker has 4 inches of rise (a normal fastball has 8-10). Parker's supposedly sinking fastball came in at an average of 10.0 inches of vertical movement. So either the calibration's off, or Parker didn't have his sink that day. We'll have to wait and see, I suppose.

Changeup: Wow. If this six inning sample is truly representative of what his changeup looks like, it's a very nice pitch. It comes in at an average of 81 mph, which means that he gets a whopping 11-12 mph differential between his fastball and his changeup. That's a larger differential than any qualified starting pitcher in 2011. If we compare that differential to 2010's qualified SPs, only two pitchers best Parker: Clay Buchholz at 12.1 and Dallas Braden at 14.9.

Slider: Remember what Michael Wuertz's hard slider looked like? It was practically a splitter, in that it came in fast, acting like a fastball while deceptively sinking downward by a half a foot, with very little lateral motion. Jarrod Parker's slider is the opposite of that. Parker's slider is slow and slurvey in its action, at 81 mph. Its main feature is its hard lateral break, in the opposite direction of his fastball (breaking away from right-handed batters). It looks like he only uses his slider against right-handed batters, preferring to stay with the fastball/changeup combo against lefties.

Curveball: Scouting reports say that Parker throws a curveball sparingly, and unfortunately, he's only thrown one in the major leagues. Because it's one pitch, I'm wary of drawing any conclusions, but he threw a gorgeous slow Zito-esque 69 mph breaker to a right-handed batter which broke from the batter's head to the inner half of the zone for a called strike. If he can throw that pitch with consistency, it's yet another plus pitch in his arsenal.

I wasn't that big of a fan of the amount of talent the A's got in return for Trevor Cahill, but Jarrod Parker is the real deal, and I'm excited to see him pitch. He's instantly the best prospect in the A's system. Baseball America ranked him as the 18th best pitching prospect in all of the minors for their 2011 rankings, and I can absolutely see why.