The recent announcement of yet another new site for a potential A's ballpark back at the Coliseum site. And yet another rendering of what a new home could look like, it made me think of all the times in the last 15 years we've been shown visions of the future that ultimately never saw the light of day. Figured I'd start at the beginning and work my way to today. If anything is missing let me know.

Uptown Oakland - First proposed in the late 90's and chosen as the best site for a ballpark by HOK Sport and Robert Bobb, Oakland's City Mgr. Arguably the best site the Oakland A's were ever connected to. Both the 385 million dollar ballpark and Bobb's career in Oakland were eventually killed by Mayor Brown in favor of a development owned by his cronies who developed housing on the site instead. 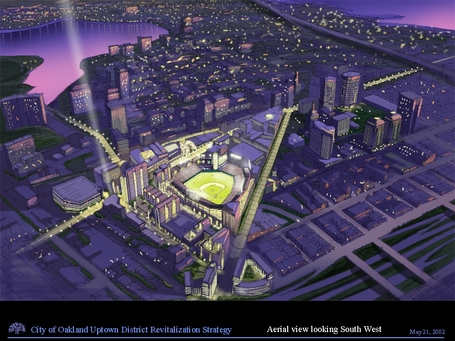 Howard Terminal - Proposed around the same time as Uptown. Was disfavored when compared to Uptown due to less transit access and much higher price tag for the time of 520 million bucks. 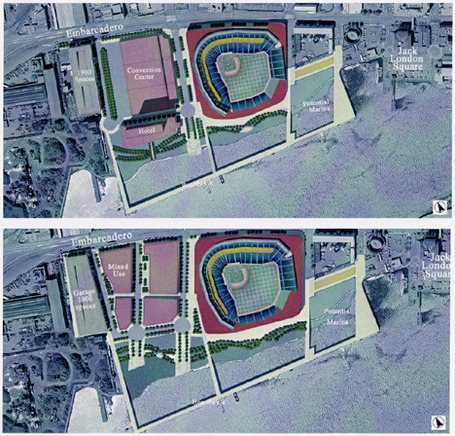 Coliseum Site 2.0 - Also looked at during the same period Howard Terminal and Uptown were being studied. Also ended up being disfavored due to opposition from both the Raiders and Warriors due to the disruption to their operations, though it would have been cheaper than Howard Terminal at $399 million. Wolff attempted briefly to revive this project as a VP of venue development for the Schott/Hoffman regime but the same issues that had plagued it previously still remained. 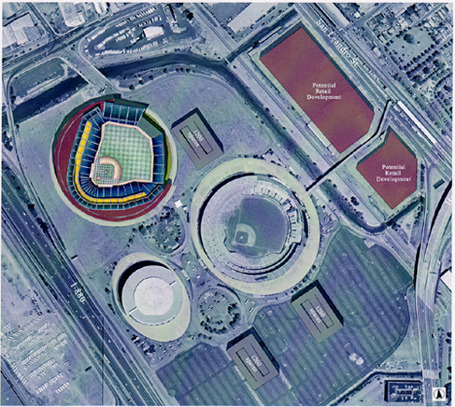 Coliseum North/66th Avenue, Oakland - This site was proposed in August 2005 by Lew Wolff as a mixed use development that would include this quirky 35,000 seat ballpark. Plan was eventually scrapped when the city and Wolff were unable to get much cooperation from the land owners of the site and neither were willing to use eminent domain. Killed shortly before the A's moved their sights to Fremont. 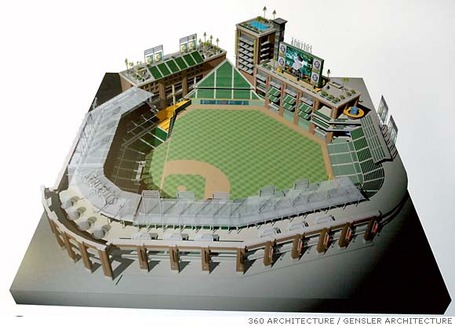 Cisco Field, Fremont - First proposed by Lew Wolff in November of 2006 along with the news he'd acquired a 4 million a year, 30 year naming rights deal with Cisco for this 34,000 seat ballpark in West Fremont at the Pacific Commons site. In anticipation Wolff purchased property near the site and arranged a land purchase deal for the site itself. Due to opposition from the neighboring big box stores it was later moved to the Warm Springs/NUMMI North site. That site ran into heavy opposition from the neighbors east of 680 and was eventually dropped. The site was temporarily revived in 2009 when Fremont was trying to decide to do with the then closed NUMMI plant and suggested the ballpark come back, however in the end they decided to keep NUMMI partially open for TESLA. 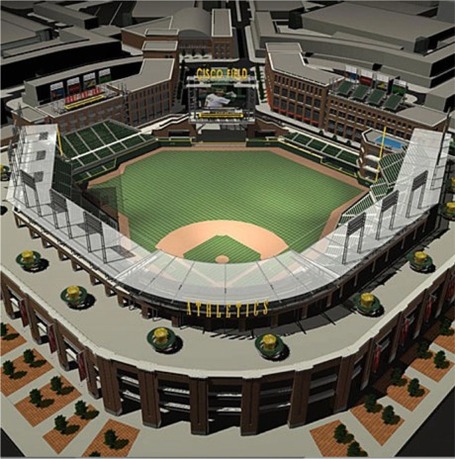 Cisco Field II, San Jose - First proposed in 2009, this 461 million dollar private ballpark is the second iteration of Cisco Field. This time in downtown San Jose next to the HP Pavilion and Diridon station. Originally planned to be a 32,000 seat ballpark, later revised up to 36,000. This project of course remains active with a completed EIR and about 50% of the land already purchased, though it has been pending MLB territorial approval now for almost 3 years. 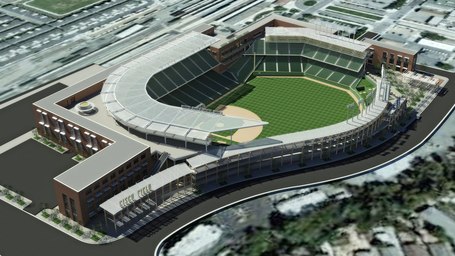 Victory Court, Oakland - Oakland's first answer to Cisco Field proposed for the Victory Court site just west of 880 almost on the Oakland Estuary first proposed in December 2009. This site has been the preferred site in Oakland by baseball's Blue Ribbon Panel. Currently the EIR on this site remains on indefinite hold even though it was approved in December 2010. This project also has major funding questions after the city admitted it would cost them $250 million to purchase the land and rework the infrastructure around the site using redevelopment money that the state has since taken away. 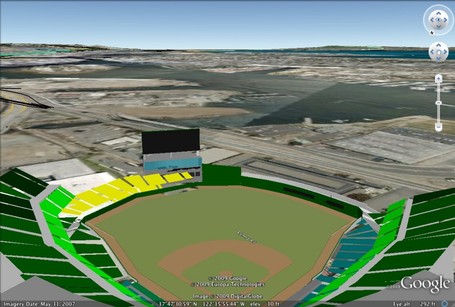 Coliseum Site 2.0, Again - First proposed December 10 by Mayor Quan as a combined site fro the A's, Raiders and Warriors. This 2+ billion dollar project would include a new ballpark, stadium, renovated/rebuilt arena and an LA Live style complex. However the particulars like funding remain a question, particularly after the state killed redevelopment leaving the project out at least $250 million that the city was depending on to make it happen. 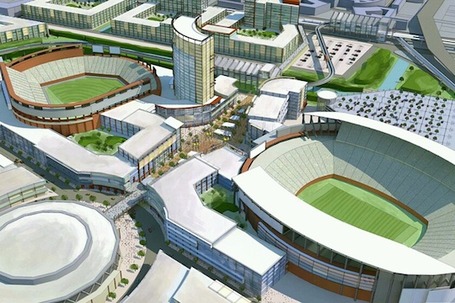